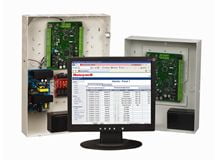 THERE’S something annoying about fundamental
technological change – especially from a manufacturer’s viewpoint. It’s the old
HMS Dreadnaught conundrum where development of powerful new technology renders
all else obsolete – including your own product stable. The result is a level
playing field on which old stagers and committed new players must now battle on
more or less equal terms.

If you think this observation relates to most of the
current generation of networked access control solutions, you’d be wrong. While
end-to-end IP video has been around for ten years now, access control is a
different kettle of fish. Hybrid access gear has been with us for about 3
decades and the market seems in no particular hurry to implement change.

Some of the sticking points holding back the move to IP access
include the importance of distributed local intelligence with remote battery
support, as well as the need for additional power to handle electron-hungry locking
devices.

But while there’s been no headlong charge towards IP
access, the past 5 years has seen a push towards globally networked solutions that’s
driven by clever old hands and big corporations – each side bent on a slice of
the action. It’s into the latter category that Honeywell fits, though it would
be churlish not to recognise the company’s longstanding position as a
manufacturer of high quality analog and hybrid access control solutions for the
top end of town. Honeywell is an access control blueblood, nothing surer.

With this Honeywell NetAXS solution you’re not getting a
revolutionary new IP-based access solution that’ll shift every door onto blue
cable and make it an edge device. Instead what you get is a wonderfully modular
hybrid animal that’s packaged so it gives users the ability to program and
manage their access systems from a central control point in the usual way, or
via a web browser from any remote location, while retaining the ruggedness of
analog door controllers.

Modularity is the key here and it benefits manufacturer,
installer and end user. At its core NetAXS features a controller with an
embedded Linux Web server, a 4-reader control panel expandable to 30 control
panels over RS-485, an onboard I/O able to handle 4 readers, 14 inputs and 8
outputs, and a downstream networked I/O with 64 inputs and 64 outputs. Along
with this unit – it’s called the Large Enclosure there’s what Honeywell is
calling the Small Enclosure – a smaller box with a controller and power – it’s really
just a network gateway for existing Honeywell access panels.

With NetAXS, networking is handled through built-in RS485
multi-drop communications, 10/100 onboard Ethernet and RS232 serial
communications. Honeywell says that the embedded Ethernet and secure
communications ensure that NetAXS can work on new or existing IT infrastructures.
Data is communicated using Secure Socket Layer (SSL) encryption and NetAXS is
designed to withstand open-port and denial of service attacks, making it robust
and secure in a network environment.

The controller’s enclosure incorporates everything else
you’d expect to find there – a power supply, distributed relay module and
battery backup. There are also some things you might not expect to find –
pre-wiring, colour coded removable terminal blocks, power for door locks,
multiple grounding points and large wiring channels. The idea is obviously to
make this beastie plug-and-play as much as possible.

According to Honeywell, NetAXS is designed to add
next-generation Web capabilities to the company’s access control products. For
example, it extends the functionality of the popular N-1000 access control
panels to ensure easy upgrades. This means that whether a customer is
installing a new system or upgrading an existing one, the intuitive NetAXS
configuration allows the installer to hang it up, plug it in and walk away,
Honeywell says.

The design and specifications of NetAXS guarantee the
system will be adaptable and user-friendly. It offers simple installation and
programming for small and medium-sized organizations including commercial
offices, retail establishments, light industrial facilities and warehouses, and
convenience stores.

Features of Honeywell NetAXS include: