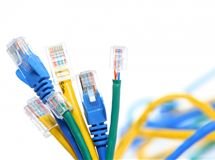 AT every security show for the past 5 years we’ve been
asking ourselves the same question. When will digital and networked video
products overcome their analog forbears and dominate the earth? The question
was on everybody’s lips at ISC West in Las
Vegas last month and while a clear answer may not have
been forthcoming at least the future is taking coherent shape.

Probably the biggest thing to come out of ISC was the
growing presence of megapixel cameras and by that I don’t mean cameras with 5
or 10 megapixel sensors and the optical resolution of a wedgetail eagle. These
new cameras have modest counts of around 1.5-2.0 megapixels and use smart new
compression sets to deliver HD resolution at modest bandwidth.

One of the keys to reducing bandwidth in this latest
generation of megapixel surveillance cameras is H.264 compression which at ISC
was repeatedly touted as having at least twice the efficiency of MPEG-4. Of
course all the compression nuts out there will know H.264 is MPEG-4 – it’s
MPEG-4 Part 10 (which includes AVC) rather than the more common MPEG-4 Part 2
that we all know so well.

So while H.264 isn’t new by any means it has found a way
into these new applications thanks to the pleasant confluence of capability and
the falling price of processors and onboard RAM. It’s fair to say that while
H.264 takes up half the bandwidth of MPEG-4 Part 2, it demands more processing
power because the decoding algorithms are more complex. Essentially what all
this jargon means is that small count megapixel cameras are now capable of
living on networks with a much smaller footprint that their predecessors.

Along with the use of H.264, other megapixel makers are
also using MPEG-4 Part 2 instead of the more common JPEG compression formats
that we’ve seen from a lot of early adopters over the past 18 months. Now, the
JPEG people will claim higher ultimate resolutions on a frame-by-frame basis
and the MPEG people will claim better streaming at image rates of up to 15ips
and they’re both right. Obviously your choice will come down to your
application.

So – is the footprint of the latest-gen megapixel gear
small enough for small/medium commercial applications who need to get 16
cameras onto a standard fast Ethernet LAN? Certainly – provided you go for the
most capable (read slipperiest) cameras and take care with your settings. You
need to remember that at the heart of performance with all these streaming
applications is just how much is going on in a given scene at a given time.
More movement means more metadata, and that means slower processing and more
latency.

Regardless of the challenges, one thing is certain. When megapixel
gets itself consistently under 1Mb per channel at D1 resolution while
delivering 15 frames per second, ignoring the technology is going become very
difficult. That’s because megapixel resolutions really are exceptional. And,
while we know most network cameras battle in low light, quality makers like
Sony and Panasonic are going hell for leather to resolve the issues and it’s
impossible not to believe they’ll get there.

For me, ISC West showed that quality analog cameras, wonderful
things though they are, are approaching the point where all possible
performance has been wrung out of them. Releases of analogue cameras over the
past 18 months support this contention. They’re all great cameras but the big
technological leaps we got used to through the 1990s and the first half of the
noughties have been replaced by incremental upgrades that offer less in the way
of outright performance and more in the way of improved functionalities –
including things like the IP connectivity that megapixel takes for granted.

By comparison, today’s capable megapixel technology is like a kid with a
long and exciting future ahead. The kid may be a little rough and raw but in
terms of potential, this kid’s simply outstanding. The catch for security managers
and integrators is going to be picking the moment of parity. While I’m not
completely convinced that moment is here yet, it’s coming – and fast.