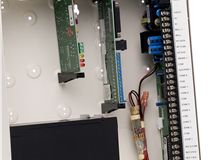 IT’S pretty obvious that the Reliance designers looked at
the venerable NetWorx solution and divining its inherent power, worked hard to
give users and installers even more of everything they’ve always loved in the
NX range. This manner of thinking is apparent across the entire feature set and
taken together the improvements constitute a solution with consummate power.

For a start there are auxiliary outputs that allow the
integration of door openers to handle garage doors. It doesn’t sound like a big
deal until you’re able to use this feature to offer customers a level of real
life integration competitors can’t.

Then there’s tamper and supervision functionality. Simple
enough, you say. But with Reliance you can apply tamper and supervision to the
panel case, all the codepads, the expansion modules, the screamers and strobes,
the telephone line and the battery. These features offer an enhanced level of
system integrity.

Another great feature of Reliance is that it’s designed
to resist false alarms. This is a feature that has the taste of the CP-01
initiative about it. Most false alarms occur on exit or entry as any control
room operator will tell you. Reliance fights back by sending an exit error
signal to the control room allowing operators to call the user and have them
reset the alarm while they’re still nearby. It’s a great idea.

“Another powerful new feature is the NX-590E Ethernet
TCP/IP Interface Module which brings Ethernet connectivity to central stations.
Working in conjunction with the Osborne-Hoffman Network Receiver, a direct line
is created into current information”

In addition, Reliance has a programmable Twin Trip feature
that allows zones to be programmed so they do not report an alarm unless they
are tripped twice within a predetermined time, while sounding codepads and/or
the siren between trips if desired.

Reliance also has fully selectable event reporting
options so installers and control rooms can determine what information is
necessary to provide an accurate picture of the operation of the security
system depending on the level of security required.

20 zone types can be fully reprogrammed to allow
installers and control rooms the flexibility to meet the requirements of the
customer.

One thing that’s always stood out with NetWorx gear is
the beauty of its bus-based approach. It’s a format that makes for easy
expansion and Reliance has lashings of it.

Remote programming and downloading is possible using
DL900 software with all features presented in a graphical user interface that
allows control rooms and installers to make changes to the system programming
as needed without visiting the site. This time-saving feature is great for
commissioning and user change requests such as changing PIN codes.

While we’ve highlighted the expanded functionality
of Reliance it’s a mistake to think there’s nothing new about this product. Key
additions include basic access control functions delivered by the NX 508E
output module and NX1701EAU card reader.

Another powerful new feature is the NX-590E Ethernet
TCP/IP Interface Module which brings Ethernet connectivity to central stations.
Working in conjunction with the Osborne-Hoffman Network Receiver, a direct pipe
is established into your current automation. Especially neat is the fact the
NX-590E can send events to 2 IP address for dual, split, or backup reporting.
Events may also be sent to two e-mail addresses.

Reliance can also be configured for backup dialing by
accessing analogue or GSM lines should network communication fail. Network
security is addressed with Triple-DES encryption and to further enhance network
security, a dynamic key generation is employed with a new 24-byte random number
generated for every event.

For commercial sites the NX-590E also offers the choice
of static IP – where the IP addresses are fixed and assigned by the IT or IS
department; or DHCP – where a pool of IP addresses is assigned by a server to
units on the network.

AA-polling is available to monitor the connection between
each NX-590E and the base station and a disruption to the connection will be
flagged and can then be investigated by the control room for immediate action
and response for critical sites. Either way all functions are programmable via
keypad or DL900 upload/download software.

“There are auxiliary outputs that allow the integration of door openers
to handle garage doors. It doesn’t sound like a big deal until you’re able to
use this feature to offer customers a level of real life integration
competitors can’t”