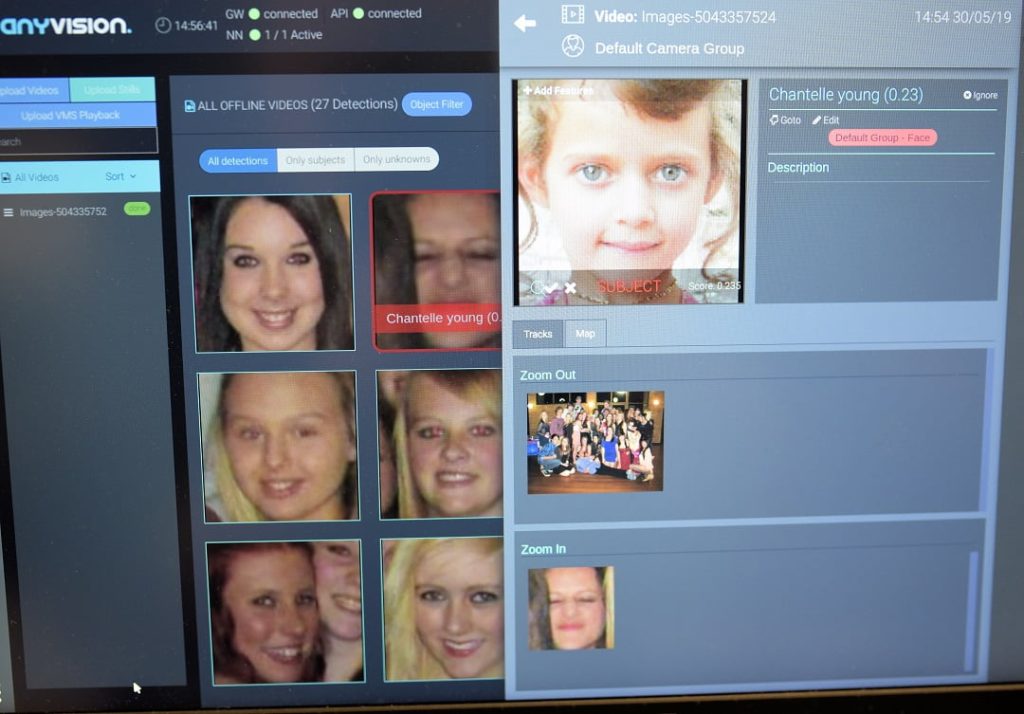 AnyVision is a server-based GPU-powered analytic solution that can process 23 faces simultaneously and offers a toolbox of neat features and functions. But it’s the raw capability of the solution that impressed me most.

ANYVISION is one of a new breed of analytics solutions that uses deep learning to find and identify faces in still images or video streams. I got a demo of the system from Sean Borg, who heads up the AnyVision distribution for Australia and New Zealand. According to Borg, the way most face recognition solutions work is by putting multiple points on a face and doing measurements.

“First they detect, then they measure and once they identify eyes, nose and mouth, they know it’s a face,” Borg explains. “Of course, if an eye can’t be seen, or the mouth is covered with a mask, then you lose multiple ID points. AnyVision works on a convolutional neuroscience artificial intelligence algorithm – we do feature extraction from all around the face and as long as we have 3-4 decent features, we can make a match.

“Competitors can’t manage this, they can’t do a face sideways, or when the subject is wearing a dust mask, or in some cases, their algorithm detects a head, not a face. With 115,000,000 people on the AnyVision database, we will still get a match in .2 of a second. By comparison, airport analytic solutions take 9 seconds to make a match between a live image and your passport photo.”

According to Borg, AnyVision can do face, object and human detection, heat map, multi sites, seamless payment and the next version will have filters allowing it to be even more discerning with people. There are other products in the line-up, too.

“We are at our best in the wild in uncontrolled environments doing detection, feature extraction, tracking and recognition,” Borg explains. “We have live, forensic (post analytic – photo to photo, photo to video), there’s an edge product with our system running on a Snapdragon phone and there’s Sesame, which is an authentication and onboarding software solution that harnesses the power of our deep learning platform to securely collate authentication documentation. Sesame confirms identity, can be used as authentication at ATMs – it removes the possibility of identity theft.”

“Various modes can be set so they only find faces on a watch list, or so faces not on the list are blurred – we also conform to GDPR and we store no video or images, only hexadecimal data,” Borg says.

Additional features of the system include the fact it is camera agnostic, runs on existing chips, is plug-and-play and is instantly operational and scalable – it’s also GDPR compatible.

The features list is very cool – it even includes the ability to display gaze estimation, which is a useful marker when seeking the perpetrators of terror attacks – attackers often aren’t looking in the direction of the attack – they already know what’s happening over there and are focusing on making an exit. But it’s raw the performance of the system when chewing over image data that will get your attention.

Borg tells me that typically a time difference greater than 20 years is a problem with face recognition systems, but he argues Anyvision can do better than that. And when we put the system to the test, I find he’s right. This system is capable of matching people in their 60s with images taken when they were children. Impressive stuff.

I came into the demo with some images on a stick showing a person in their 60s, as well as an image taken in mid-30s, early 20s and another image of the same person at 11 years of age. I also had an image of a lookalike who was around the age of 15. All these images were threadbare quality – no more than 100kb at the most. Borg loaded the images into the system, selected a low percentage of tolerance, and pressed go. Instantly, the system identified all the images of the person – including the one taken as a kid. The curve ball image was no match.

I did not even notice this face while viewing the video footage.

Borg had a trick up his sleeve as well – first he used a photo of himself at 16 to create an alert when the system detected him in Live mode. Next, he pulled up a photo of a group of young people at a party. The kids were in their late teens – some smiling, others pulling faces and a few wedged into gaps who I didn’t even notice. The subject image is one of these teens as a child.

I tried to match the faces and picked one that turned out to be wrong. But when Borg hit go, AnyVision instantly matched a screwed-up face hidden in the heart of the scene with the subject image. It was phenomenal performance. The system also managed to identify me when looking downwards with sunglasses on. That’s a tough gig for analytics software.

If you get a chance to have a look at AnyVision, don’t miss it – this technology comes highly recommended.