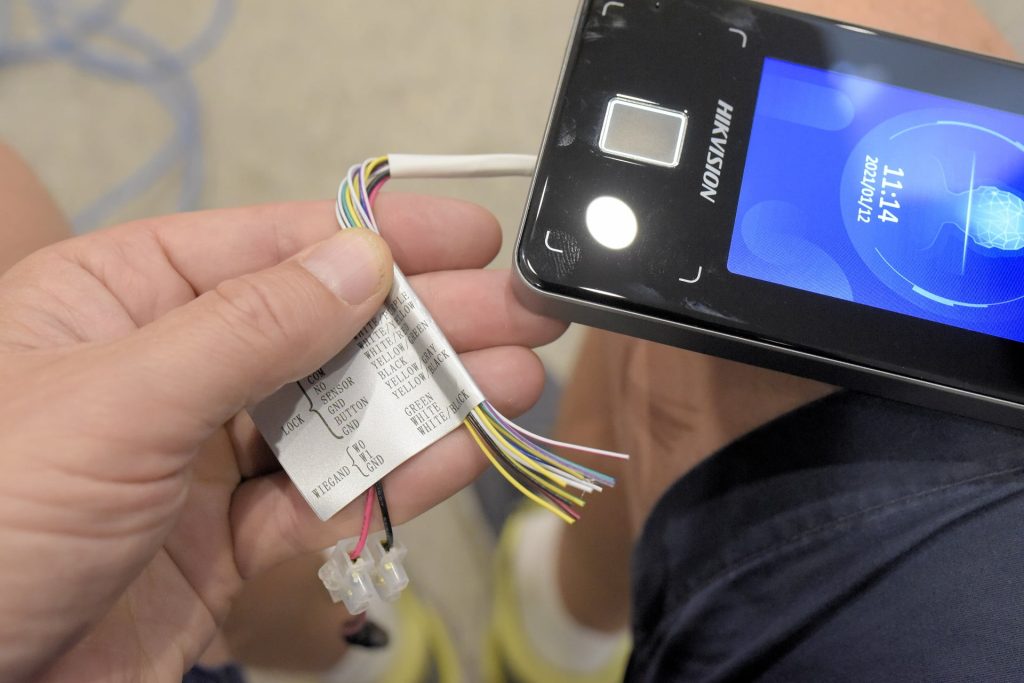 Hikvision’s DS-K1T341A (available in AM or AMF versions) Series Face Recognition Terminal offers typical Hikvision build quality, with good hand feel, a sleek finish all over, and a solid working temperature range backed up with an IP65 rating against dust and water.

INSTALLATION is a snap, too, with single clearly marked bundles of wires handling RJ45, RS-485, Wiegand 26 and Wiegand 34, and there’s a lock output, an exit button, a door contact input, a power interface and a tamper, with all these pre-wired – you just bring the door to the terminal. There’s a USB port underneath to access data and a quality 4.3-inch 720p LCD screen. A ridged body helps disperse accumulated heat. Supporting the IP65 rating is an excellent operating temperature range from -30 to 60C and a rugged Linux operating system.

Enrolling a person is extremely easy – you just name the user via the capacitive touch screen and take a snapshot. Whenever the person stands in front of the terminal they are authenticated, and the door is unlocked. That’s basically all there is to it. In fact, the entire solution is pretty much perfect for SMEs and even homeowners wanting high security, COVID-safe access control at an affordable price, without compromising operational reliability or having their system database online.

There’s 2-way audio with client software, indoor station, and master station, support for TCP/IP, support for ISUP5.0, ISAPI, configuration via the web client, face recognition with an authentication distance of 0.3m to 1.5m, though our preliminary twiddling suggests it works well at closer ranges, too. The audio is driven by an integrated omnidirectional microphone and loudspeaker and volume adjustment is possible at the terminal or via the client software.

The integrated camera is 2MP with a wide-angle lens and wide dynamic range, while the terminal is claimed to deliver fast reads from its deep learning algorithm, which gets more accurate over time when identifying a user. Read time is said to 0.2 second and we think it’s slightly faster than this, while face accuracy is claimed to be 99 per cent.

Something interesting is that it requires a lot of work to trick the deep learning algorithm. It’s capable of seeing through silly faces, medical masks, extreme angles and it even identifies me accurately even when half-obscured by a DSLR camera.

The terminal screen goes to sleep when there are no faces around but as soon as it detects you, it powers up the screen and almost instantly authenticates the user. And it has the temerity to remind you to wear a mask while it’s making authentication decisions.

And thanks to that deep learning algorithm, read times become increasingly more accurate the more often the reader successfully authenticates a person. The mask wearing alert was also highly reliable – it almost never made a mistake. A neat feature is forced mask wearing alert – if the user has forgotten their mask, the device will prompt a voice reminder and the authentication will be failed, denying the user access until they put a mask on.

While most users will stick with face recognition for the time being, thanks to COVID-19, the terminal supports Mifare 1 cards and fingerprint authentication, as well as face recognition, and these authentication processes can be stacked to increase overall security levels. The terminal also connects to an external card reader via RS-485 protocol, connects to a secure door control unit via RS-485 protocol to avoid the door opening when the terminal is destroyed and connects to an external access controller, or Wiegand card reader via Wiegand protocol.

Other features include face anti-spoofing, capture linkage and captured picture storage onboard for stand alone operation, as well as the ability to transmit card and user data from or to the client software via TCP/IP protocol and save data on client software, import pictures from the USB flash drive to the device or export pictures, events, from the device to the USB flash drive. When used in stand-alone operation, users can manage, search and set device data after logging into the device locally.

Operationally, the system supports 6 attendance statuses, including check in, check out, break in, break out, overtime in and overtime out. There’s also configuration via web client and the ability to remotely open doors and undertake live view via Hik-Connect, and there’s also support for ISAPI and EHome 5.0 protocols.

The key takeaway from our review of the DS-K1T341A is the simplicity of operation and installation with this terminal – it handles a database of 1500 cards, 1500 faces and 1500 fingerprints and 150,000 events and it does so in the easiest possible way, with clear audio feedback of authentication attempts. The system can be networked or standalone and everything is wired, marked and ready to go. For users requiring affordable high security in a low touch environment, this system is well worth a look.