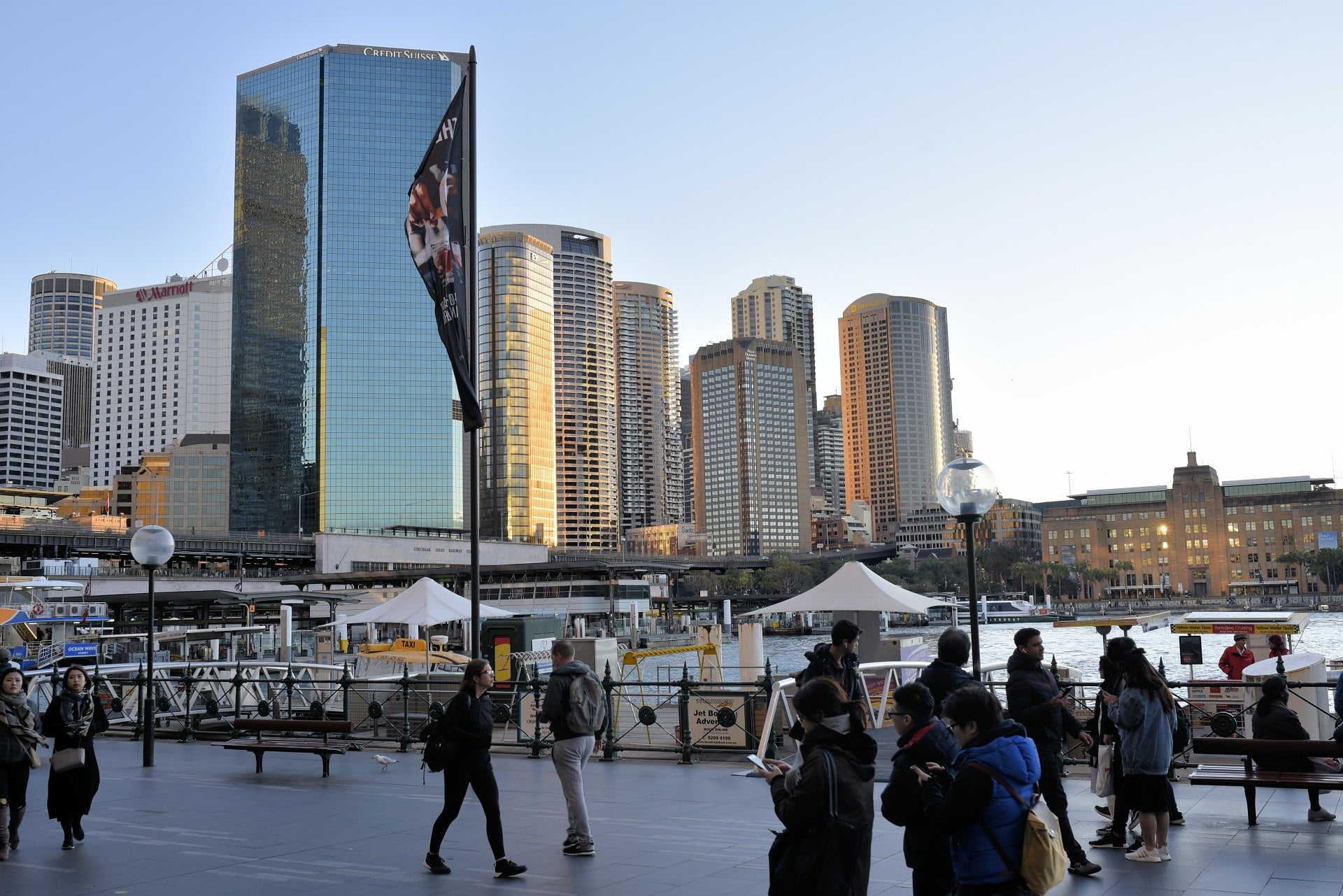 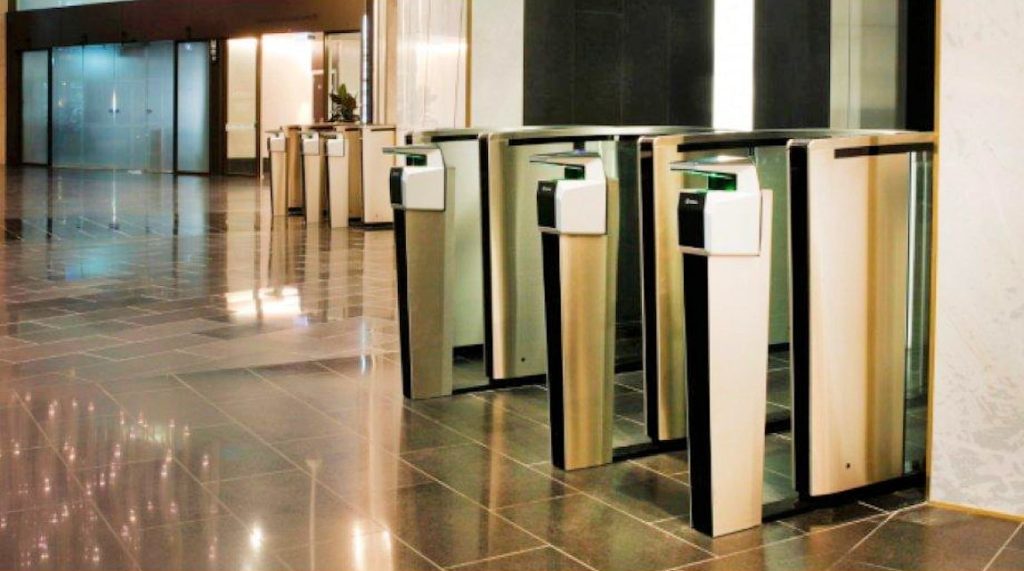 Gateway’s access solution allows authorized and registered tenants to wave their hand in the MorphoWave touchless fingerprint scanner reader to enter the secure area through the turnstiles. Guests can sign in and register their finger pattern to become authorized to enter.

MorphoWave scans and verifies 4 fingerprints through a simple hand wave gesture, during which the sensor takes several 3D photos of each fingerprint to extract biometric data and compare with the authorized fingerprints stored in the device. If prints match, the user is granted access in less than a second.

MorphoWave readers are connected to Schindler’s PORT Technology, which receives the user’s credential data after authentication and conducts a cross-check with the building’s access control database. If the user is valid, a command is sent to the Boon Edam Lifeline Speedlane Swing to open its barriers.

“Tenants have a duty of care to protect their employees and visitors as well as valuable data and intellectual property, and they need the cooperation and support of a responsible and innovative building manager such as Dexus to manage secure entry into the building,” said Michael Fisher of Boon Edam Australia.

A major part of the solution involves elevator destination control, whereby a user’s credentials are automatically assigned an elevator as they are verified and allowed access through the turnstile. This seamless integration was facilitated by an existing global partnership between Boon Edam and Schindler.

The partnership arranged for Schindler’s PORT 4 mini technology to be embedded into the Speedlane Swing optical turnstiles at the manufacturing stage in the Boon Edam factory. Using an advanced algorithm and the integrated Schindler PORT 4 mini elevator destination control for visual and audio feedback, an elevator is automatically assigned, at the same time the turnstile is opening, allowing for optimum efficiency.

The security is controlled by Honeywell’s access control system, which is also integrated with Schindler’s PORT Technology. Honeywell has been managing the security and building management systems for the Gateway building since it was first opened in 1990. According to Honeywell’s Rhys Crabb early engagement at all stages and a commitment to a collaborative approach enabled Dexus to select the best available technologies.

“Dexus placed customer outcomes first and foremost in the project brief, ensuring the delivery of a product that provided tenants and visitors with a premium, modern and secure user experience that is flexible and easy to use,” Crabb said.

Meanwhile Stephen Hodge of Dexus said that with so many stakeholders, and a strong need for reliability and quality, it was important everyone knew the goals of the project and worked well together.

“I’m pleased to say that it was like a perfect jigsaw and everything came together smoothly,” Hodge said. “What was important to Dexus is that we were pushing the boundaries to create better experiences, but we’re only doing so with proven products. Boon Edam’s optical turnstiles have been installed globally and locally, and this gave us added confidence that they were the right product for this forward-looking project.”

“Another significant help with this project was that the companies involved built a prototype, located at Schindler’s Head Office based in Sydney, so that the Dexus management and technical teams could test the solution well in advance of implementing it at Gateway.”

“It gave us peace of mind that we’d selected the right suppliers. We have tenants in Gateway who requested ground floor security, so we went out to tender to seek the best combination of sophisticated security and elegance, without being obtrusive to the building’s users.”

Touchless fingerprint scanners were chosen to control access to secured floors and areas of the building, because they provide an extra level of privacy that was attractive to tenants.

“A computer algorithm converts each person’s unique fingerprint signature into binary code, zeroes and ones, and uses that code to grant access,” explained Hodge. “Boon Edam turnstiles have the ability to integrate facial recognition, which could be highly valuable in other projects, but the fingerprint scanners were the right fit for this building. Boon Edam made it simple to integrate the scanners with their optical turnstiles, which helped us meet project deadlines.”

For such a complex project, installation always has its challenges, including managing installation work as people continue to use the building.

“The Boon Edam installation team always ensured safety was the number one priority and they did a quality job, even with some very difficult-to-access areas,” said Bill Garrett, facility manager at Gateway Building.

“One of the major benefits of the new entry system is that there’s a dedicated underground entrance for tradespeople, couriers and deliveries, which removes congestion and bulky carts from the main lobby. It’s all about enhancing the user experience, and Gateway will set a new benchmark for a seamless, secure and aesthetically pleasing entry.”

According to Garrett, to get tenants used to a totally new system, the project management team adopted a staged approach. At first, the turnstiles were put into place but left in the open position and after an initial period, some of the turnstiles were closed so that tenants could try entering using the new technology, if they wished. Finally, the entire system was fully implemented.

“In addition to this staged approach, we met with key tenants and allowed them to test the system in advance,” Garrett said. “The testing, combined with the staged approach, allowed for a smooth transition to the new security technology.”

150350
We use cookies on our website to give you the most relevant experience by remembering your preferences and repeat visits. By clicking “Accept All”, you consent to the use of ALL the cookies. However, you may visit "Cookie Settings" to provide a controlled consent.
Cookie SettingsAccept All
Manage consent