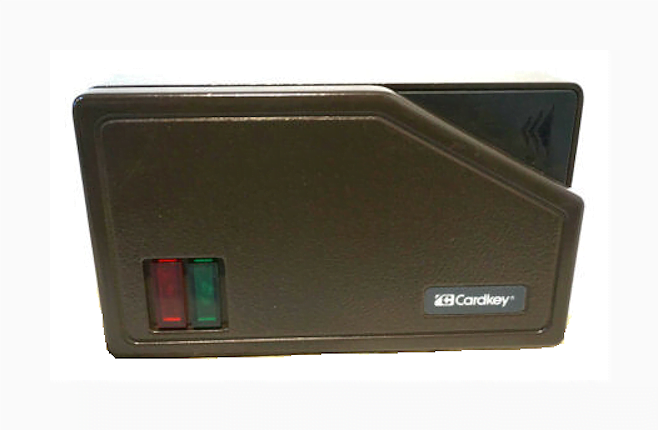 First developed for access control by Cardkey Systems in the 1980s using technology based on wire magnetism discoveries by J.R. Weigand, systems using Weigand are still used in a number of forms and remain reliable and comparatively secure, though they hampered by the limitations on site and cardholder codes, which lead to duplications.

Weigand cards function thanks to a magnetic field effect, a field that’s built into card readers. The Weigand card’s distinctive signature is derived from hair-fine lengths of heat-treated, twisted wire contained in the body of the card. Each of the tiny wires, which are laid out in two long rows down the card, has an outer shield that holds and stores a magnetic charge.

Within this outer portion there’s a twisted core that can magnetise but is unable to store that magnetic energy. Each individual wire within the two rows is given a binary value of either 0 or 1, but not all the wires are active, with some deliberately dead and others generating false codes.

The Weigand effect occurs when a reader’s magnetic field energises the inner part of each wire but is not strong enough to permanently magnetise the outer part. Once in the field, the twisted inner part absorbs the magnetism and in doing so tries to go back to its original shape. At a single stress point what’s called a “snap” action occurs on the inner wire.

Operationally it works like this. As the card is swiped through the reader it generates an electromotive force and a current that it pushes toward the surface of the card as it tries to magnetise it. The shift from absorption to transmission of magnetism creates the smallest of electrical charges, just enough to be recognised as a signal by the reader.

Each wire generates a different charge. And the signals from each wire, based on strength and sequence, are collected by the reader and passed on to the controller for decoding. Weigand cards have no coding to be damaged and are completely free of interference from the EMI and RFI sources that can challenge prox. Weigand cards are full contact cards, and this makes read times slightly higher than for proximity.