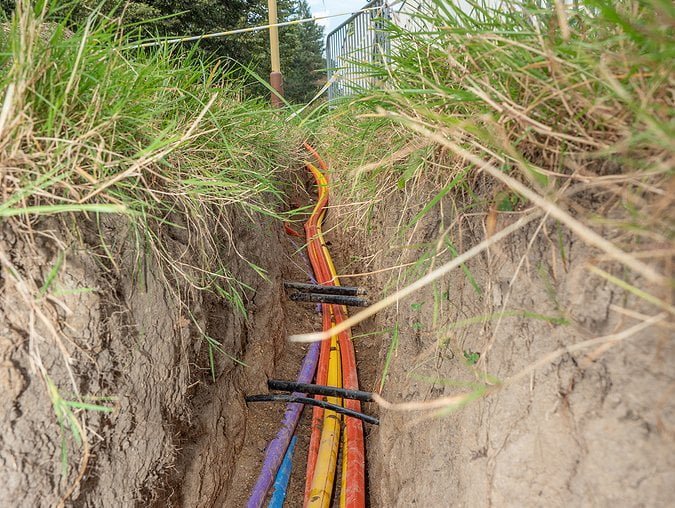 When undertaking an open cut trench for the purpose of laying cable, key aspects to consider during planning include the soil type and the level of soil moisture in the area where you’re operating.

The wetter some soil is, the less stable it can be, depending on the type of soil being cut. Conversely, some soil types (sandy) are less stable when dry. Ignoring soil mechanics might be something electronic security installers can get away with in shallow trenched cable runs (500mm deep or less) but when you’re messing around at 1.5m plus, you may need to incorporate shoring or trenching boxes to guarantee the safety of workers in the cut. Obviously, the width of the cut will have some bearing on your work. In a very narrow cut where cable will be lowered from above and into which workers can never descend, operations may differ.

Elements of soil mechanics you’ll need to consider include things like tension cracking, heaving and squeezing (especially in damp soils), and boiling, which can occur when the water table or an aquifer rises close to the cut floor. Some of the most dangerous aspects of soil mechanics include sliding and toppling of trench walls as a result of tension cracks – toppling is the most dangerous. Workers in the trench may suddenly be buried under tens, hundreds, or thousands of kilos of soil peeling away from the trench wall along a line of adjacent cracking. Only adequate shoring or boxing can minimise such dangers.

It’s very important that you establish the nature of the soil you’re working before any digging starts. You’ll have Type A, Type B and Type C soils to contend with, the latter being least stable. Each of these soil types has a different unconfined compression strength, a rating that defines a soil’s ability to hold together when cut.

Type A soils are almost always clay-based. Remember, however, that any cracked soil mass, or any soil mass that has been moved around, is never defined as Type A. This rule applies no matter what base material constitutes the bulk of a soil’s mass. If you’re digging through loose clay landfill then you’d be smart to rate the attendant risks as being identical to those found when working with Type C soils – sand. The way to establish the nature of sedimentary layers is by coring along the line of the trench.

Trenching can be a dangerous business – if you don’t want to get involved with it contract professionals and let your costs reflect the work you’re doing. Quote the trenching separately and make the safety issues stand out on the page – and be sure to tie them into the OH&S standards of the site on which you’re working.