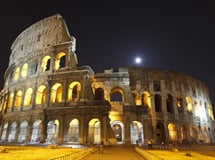 WHILE the vast majority of tourists, who flock to Rome’s Colosseum every year, are happy to simply experience one of the wonders of ancient Rome, a few either want to take a piece home with them or to leave their own mark on the monument. A high level of security is vital to ensure the preservation of the amphitheatre, and is therefore a key issue for the Soprintendenza Archeologica of Rome, the local government department responsible for architectural conservation.
Until a few years ago, the Colosseum relied on an analogue security system comprising a multitude of fixed cameras providing low-resolution images, which limited the ability of the security staff to accurately monitor the amphitheatre. The quality of the videos was poor and it was often difficult to identify and reconstruct recorded events.
Soprintendenza Archeologica of Rome therefore embarked on a challenging project to replace the Colosseum’s analogue surveillance infrastructure with an expanded and upgraded CCTV system, integrated into an IP transmission network.
While investigating potential new systems, Piero Meogrossi, Technical Director responsible for the Colosseum at Soprintendenza Archeologica of Rome, was impressed by Canon’s network video solutions, which offered all of the increased security features required and contacted SN Tecnica, a local systems integrator and Canon partner with vast experience in CCTV installations.
SN Tecnica undertook a thorough analysis of the Colosseum’s needs and recommended a tailored solution to enhance the security of the site.
“Security was not only limited by the presence of outdated and underperforming analogue cameras, but also by the difficulty in placing cabling in the amphitheatre,” says Sergio Nitti, general manager at SN Tecnica.
“The Soprintendenza Archeologica of Rome is extremely cautious about allowing any intervention in the Colosseum and there are strict limitations to work in the area in order to preserve it. It was clear that the fewer cameras we installed, the lower the risk would be of potential damage to the monument.”
The Canon video surveillance solution proposed consisted of several pan tilt zoom network cameras with a 26x optical zoom, which were connected to the existing CCTV equipment.
“For us, it was crucial to find a solution that could be easily integrated into our existing CCTV system,” Meogrossi explains.
“Canon’s solution was the perfect fit. Not only was the image quality and performance of Canon’s network cameras outstanding, but we were even more impressed by their seamless integration into our current IP network.”
SN Tecnica created unobtrusive thermal housings to protect both the Canon cameras and other electrical equipment from unfavourable weather conditions. The systems integrator also implemented an encrypted Wi-Fi bridge connection to enable remote data transmission through the two security observatories in the Colosseum.
The local control room was linked remotely to the main control room, which SN Tecnica equipped with a high capacity storage server running a customised version of Canon’s software translated into Italian. This was an important requirement for the Colosseum, which was eager to adopt an Italian language platform to set up a simple and easy-to- understand working environment for the Italian security team.
“We developed a bespoke solution to meet the specific needs of the Colosseum,” says Nitti. “Compared to the previous infrastructure of fixed, analogue cameras, the Canon VB network cameras allow improved coverage with fewer devices. The cameras’ compact bodies make them unobtrusive and their PTZ (Pan/Tilt/Zoom) functionality has significantly extended the Colosseum’s surveillance capability.”
The PTZ feature makes it very easy to adjust the viewing angle, and expanding coverage to a full 360º horizontal field of view. Images remain clear and blur-free during PTZ movement. Furthermore, when some motion is detected, the camera can be set to pan and tilt to follow the subject’s movement.
Nitti emphasises the exceptional low-light performance guaranteed by the Canon video surveillance solution: “Canon’s bright lenses, combined with high sensitivity image sensors and Canon’s Digicnet network engine, provide clear visibility of subjects and surroundings even in low-light conditions. This has turned into a significant asset for the Colosseum’s security team, which can easily detect any suspicious movement in every part of the site.”
A multimedia platform called ‘Colosseumweb’ has also been set up to promote the cultural and artistic value of the amphitheatre.
In the next few years, this project could benefit from the Canon network cameras installed at the Colosseum.
“Since 2003, we have been discussing the need to extend the renovation process of the Colosseum by pursuing additional technical and structural improvements together with tourism initiatives,” says Meogrossi.
“Through additional Canon network cameras accessible through into the Colosseumweb platform, it would then be possible to have immediate access to a virtual tour of the building, remotely exploring the area as if it was a live visit.”
The benefits of the installed Canon surveillance solution are much greater than originally expected. Meogrossi is able to rest assured that the architectural jewel in the crown of ancient Rome is being constantly watched by the most up-to-date digital surveillance system.

“Security was not only limited by the presence of outdated and underperforming analogue cameras, but also by the difficulty in placing cabling in the amphitheatre”