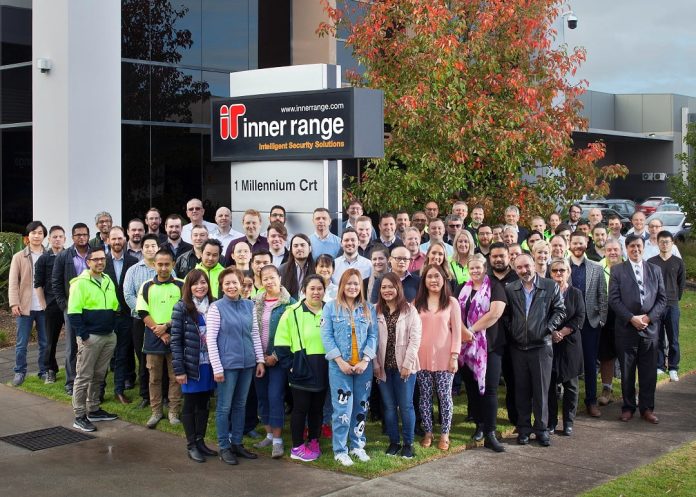 The 4 founders mortgaged their family homes to fund R&D and later the Inner Range business, which was then headed up by Mark Peachey, took out a loan to cover manufacturing of the first run of Concept 2000 systems, which had a successful release in November 1989. A characteristic of Inner Range, then and now, was the symbiotic relationship between its engineering department and the company’s installer customers. Frazer developed and polished the Concept 2000 hand in hand with field technicians who constantly supplied ideas and feedback.

By 1995 it was time for an upgrade and Frazer successfully argued that the Concept 3000 should be completely new, with a much stronger integration between alarms and access control. While the Concept 2000 only had 8 partitionable areas, Frazer stretched the bounds of possibility with Concept 3000, giving it 250 partitions and the capacity to support 250 modules on one network. Building this powerhouse took 18 months and the new system was released early 1997.

Given the complexity of the Concept 3000, it was clear Inner Range needed to manage the route to market and a partnership with Security Merchants NZ saw the launch of Security Merchants Australia as a dedicated distribution arm. A few years later, George Davies and Barry Whitehead kicked off Inner Range Europe based in the UK and thanks to the hard work of the team, established the Inner Range brand across much of Europe in verticals from education to defence. Another key development in 2000 was the launch of the first Inner Range Certified Training Programme for installers.

Inner Range launched Insight Software in 2004, then Concept 4000, as well as software solutions and communications modules. Central Security Distribution was established as an exclusive distributor for Inner Range and other products in 2008. Inner Range Integriti hit the market in 2012, while Inception and Infiniti Class 5 arrived in 2016, EliteX keypad in 2017, and the company continues to push forward with new releases, including Version 18 of the Integriti technology platform, which won Best Product in the Australian Security Industry Awards for Excellence last month.

Although Inner Range, (along with local distributor, Central Security Distribution), was acquired by Anixter earlier this year, the company’s history of local excellence and growing global market share look certain to continue well into the future.

“We’ve come from humble beginnings, but our future looks unbelievably strong,” said Inner Range’s CEO Peter Krincevski. “Anixter has made it clear that the Inner Range product is going to be supported by considerable investment to ensure the product lineup retains its preeminent position in Australia and New Zealand and continues to grow in global markets. We are going to be building on our longstanding success in Europe, while expanding into a number of new territories.”

According to Krincevski, analytics is a key focus for the Inner Range engineering team and plans are well underway to introduce intelligent automation capabilities to existing solutions, including Integriti, Infiniti and Inception.

“As we grow in existing global markets and expand into new markets, we’re going to continue our efforts locally to collaboratively develop solutions that will help installers and integrators in ANZ meet the challenges of the rapidly evolving electronic security industry here, with future product families planned,” he says.

“We are thinking hard about the future and about ways to bring positive disruption to the market – to empower installers and end users with clever solutions they simply cannot do without. That’s what Inner Range has done for the past 30 years and that’s what we’re going to be doing into the future.”