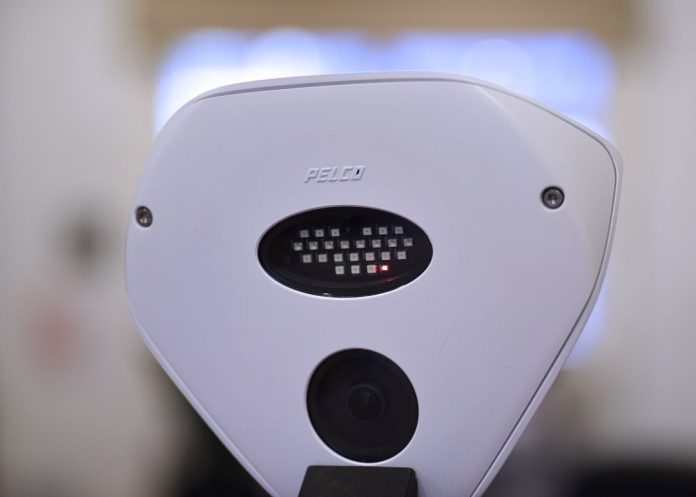 PELCO Sarix IBD329-1 corner camera is a striking piece of kit from the moment you wiggle it out of the box, thanks to an angular lozenge shape designed to make it virtually impossible to get leverage on. As well as being IP66 rated against water and dust, the Sarix corner camera is rated IK10+ against vandalism, giving impact resistance of up to 50 joules. It has die-cast aluminium construction, NEMA 4X rating and weighs 1.15kg. The hand-feel is good and the build quality leaves nothing to be desired. Perhaps the only thing I’d like more of in the physical specification is space to run the Cat cable – you simply must shuck the housing and even then, the acute angle at which the cable approaches the port means it’s a tight squeeze.

My first impressions of performance are strong colour rendition, high resolution, good contrast, low noise, low latency and low blur. Because the camera is designed for installation in cells and other relatively compact access-controlled spaces of up to 10m x 10m, I’m keeping Sarix Corner Mount inside for this test. Something I notice immediately is relatively strong barrel distortion – you expect this with a focal length of 1.8mm on a 1/2.8-inch sensor. But in corner-mount installations, this distortion is not going to be a huge deal. There’s a considerable focal sweet spot towards the centre of the frame, which is where most the action will be taking place.

Here we are forced into night mode.

Something else I notice is that the fixed 1.8mm lens gives excellent coverage of my internal scenes. I’m using the Magic Arm to hold this camera in an upright position tipped forward to emulate the 45-degree angle the camera takes up when flush-mounted in a corner. I can see the strength of the angle of view as soon as I look at the monitor. The horizontal angle of view is good, the vertical angle is better still. Usually you would try to avoid such a high view, given it spreads pixels to areas you don’t to need to see in typical scenes.

But Sarix Corner-Mount is different – installed at 45 degrees it doesn’t bother with ceilings but looks down at its feet and covers everything in between. That’s the sort of coverage you need from a corner-mount camera like this one. In fact, the vertical angle of view is so long I find it hard to hit the perfect spot – I make half a dozen trips down to the garage trying to eliminate the garage ceiling from my vertical angle of view. Meanwhile, perspective distortion is making the scene appear a little deeper than it is – 7.5m x 4.5m – and there’s some moderate moustache distortion at the top edges, which is where you want it to be.