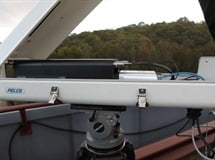 SPECIALIST security technology organisation Vision Intelligence has used one of Fujinon’s high quality D-60 surveillance zoom lenses to watch over the M24 midget submarine wreck, the only Japanese midget submarine wreck located in Australian waters, which lies 5km off of Bungan Head in Sydney.
According to the director of Vision Intelligence, Dr Maher Magrabi, Vision Intelligence offers design and consultancy services for custom security and surveillance projects.
“As Fujinon lenses are seen as the benchmark in quality and reliability we always try to design them into our system solutions wherever possible – that’s why the D-60 was included in the M24 midget submarine wreck surveillance project,” he says.
The M24 midget submarine project came as a result of the belated finding of the wreck in 2007 by a dive team off Sydney Harbour. The wreck became part of the 70th anniversary of the midget sub attacks on ships in Sydney Harbour and is important as a heritage site.
“We have undertaken several projects over the years requiring specialised surveillance solutions,” says Dr. Magrabi.
“The M24 wreck project required another of this type of solution. As the wreck is 5km off the coast we needed a surveillance solution that would include a high powered, high quality lens mounted on a land-based camera. After an assessment of all suitable options the Fujinon D-60 was chosen as the best suited for this job.”
The D-60 provides Vision Intelligence with clear images across the 5km distance and enables the capture of critical video which when integrated with a vessel tracking system that creates a valuable surveillance tool.
Once a vessel is detected, the Pan Tilt Zoom mechanism of the camera attached to the D-60 can then be controlled to track it. Information on the vessel is simultaneously relayed back to the Water Police and Department of Heritage so both organisations can keep a record of activity near the site.
“Fujinon lenses have proven themselves in very challenging applications, both in terms of quality and performance and we will certainly continue to use them where possible,” Dr Magrabi says.

The Fujinon D-60X12. 5R3H series is the industry’s highest standard, day and night HD electronic zoom lens. Features include IR day/night function, automatic focus, fog penetration function, multiple infrared wavelengths optional (808/850/950nm) and the ability to monitor a site at a distance of 5-10km.
The wide spectrum 400-950nm has a permeation rate over 80 per cent and there’s 60x optical magnification and a 750mm focal length which can be doubled using an extended giving a focal length of 1500mm.
Control functions include electric control, RS232 control and servocontrol and there’s an e-coating technology of Nano EBC which guarantees no mould and no oxidation of the lens hardware for 20 years.
Other functions include automatic and manual aperture adjustment according to actual needs so as to obtain the best aperture for image detail as well as optical technology in the color change when in fog penetration mode, that solves the challenge of secondary focus.
Fujinon has assembled the D-60 lens into a portable unit which can be booked for a full demo by contacting Chris Royal at Chris.Royal@fujifilm.com.au

“Fujinon lenses have proven themselves in very challenging applications, both in terms of quality and performance and we will certainly continue to use them where possible”