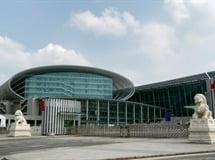 GUANGHZOU Baiyun International Airport is currently the second busiest in China based on passenger flow, and the third largest based on cargo movement. The new airport facilities demanded the relocation of 20,000 people to make way for new buildings and will handle more than 80 million passengers and 2.5 million tons of cargo annually. The schedule for this ambitious project began in early 2000 with the first phase completed in 2002 when the new airport was up and running. The total project, however, will be completed this year. The first phase encompassed design of a 3,500,000ft² central passenger terminal complex, two runways and associated roadways and parking facilities. The second phase includes designs for an additional runway and expansion of the terminal, and the third phase will include another central ticketing terminal and 50 additional gates. The project is also likely to involve a railway to and from the city.Given the volatile international environment, security at airports is critical, with access control being a key factor. Access points to air traffic control operations, maintenance, crew lounges, baggage handling, concessions, and catering require strong control.

“The Cardax FT system controls over 320 doors, and includes 108 boarding gates to aircrafts, 130 gates for employees, 12 doors to aircraft hangars, and elevator control. Future expansion could see the system grow to be in the vicinity of 200,000 cardholders, and 2000 doors”

An airport is a logistical environment, and the system needs to be monitored to allow airport security to respond to priorities immediately with detailed, real time visual and factual information, particularly for key areas and gates.Requirements of the site included access control and alarm functionality, with a record of events and movements for full traceability. Cardax FT was selected as the central management system for access control and intruder alarms, and is extended with integration involving CCTV, alarms, fire, and elevator control.For example, an automatic response is required for fire alerts, to unlock certain exits. For energy efficiency, the Cardax FT system is interfaced to Building Management Systems to control lighting and air-conditioning. Such flexible integration is achieved using the data available via the OPC alarms and events interface.Residing on the existing Wide Area Network, using TCP/IP, Cardax FT features peer-to-peer communications so if communications with the head end need to be taken down, those on the airport using the system are not affected. This means should the airport experience network communications problems, security and access control of the site won’t be compromised.Cardax FT is proving to be a powerful multiple workstations access the database to manage cardholders, events, check on the status of doors, override doors, and trace activity. System division is used to enable the airport to be divided for management and monitoring purposes.With over 20,000 cardholders, cardholder management had to be efficient and allow for changes to be applied easily to groups of cardholders. Cardax FT manages cardholders by groups for cardholders who share the same access requirements. A cardholder may belong to one or more access group to get their full access privileges.The Cardax FT system controls over 320 doors, and includes 108 boarding gates to aircrafts, 130 gates for employees, 12 doors to aircraft hangars, and elevator control. A Cardax FT Intelligent Door Terminal (IDT), using Philips Semiconductors contactless Mifare Standard technology is on each door. The Cardax FT IDT is card plus PIN reader, and has a back-lit dotmatrix LCD, enabling prompts, time and date, and feedback to be displayed on the screen. Intruder alarms can be set and unset by authorised cardholders using the Cardax FT IDT.Superior data protection is provided by the Cardax proprietary format through data encryption and unique encoding on the card. Encoding issue levels and region codes in the Cardax format ensures that even across global card databases, the card data is unique. Mifare technology allows for multiple applications to reside on a single card.Layers of security are achieved and extend from card, PIN, and PhotoID. In certain areas voice recognition is required, which is achieved with the digital intercom integrated into the Cardax FT IDT. There are 13 Cardax FT Challenge workstations, used to double-check the identity ofcardholders passing through a nominated door via visual comparison of a cardholder image against a live image from a third party system.Exit readers have also been installed to facilitate anti-passback. The antipassback feature prevents a cardholder from re-entering an Access Zone if they have not made a valid exit from that zone. In addition to the extensive features within Cardax FT, other attributes were scrutinized, which involved mainly the technology behind the system, and the life and credibility of the system. For the life of the system to be in line with expectations, it had to be proven in other large sites of market leaders, and scalable for anticipated growth of the airport. Future expansion could see the system grow to be in the vicinity of 200,000 cardholders, and 2000 doors. Cardax FT has been designed as a premium system for large sites as they grow to multinational enterprises spanning the globe. It is capable of supporting an unlimited number of cardholders and access controlled doors. An unlimited number of workstations can be established for operators to access the system according to their privileges and system division. With the scalability, technology,cryption, and credibility demanded by airports, Cardax FT is system that has been duly applied to this dynamic industry, with Guanghzou Baiyun International Airport being a key example.

“Cardax FT was selected as the central management system for access control and intruder alarms, and is extended with integration involving CCTV, alarms, fire, and elevator control. The system is also interfaced to Building Management Systems to control lighting and air-conditioning using the data available via the OPC alarms and events interface”