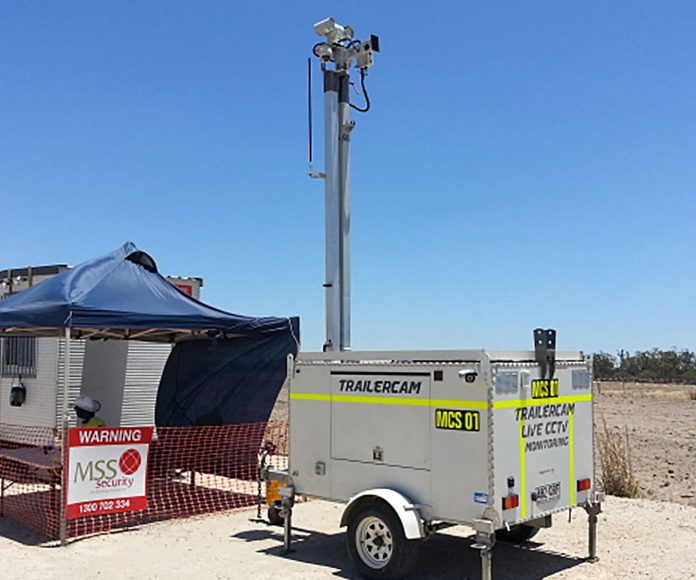 Mobile Camera Security and Security & Technology Services in Darwin have worked closely to win a contract for the manufacture and supply of a fleet of 10 customised Trailer-Cam Mobile CCTV Trailers for the Northern Territory Police.

NORTHERN Territory Police has awarded a contract for the manufacture and supply of 10 Trailer-Cam units to MCS and STS and it will use the units to monitor crime hotspots around Darwin. The latest contract win comes after MCS and STS successfully delivered 5 Trailer-Cams to Northern Territory Police, which were used in a range of applications around the city of Darwin over an 18-month period.

According to NT Police, in 2017 there were 3500 crimes caught on camera, 576 of which led to prosecutions, which was double the figure of the year before, thanks to greater use of CCTV. Police see this as evidence that CCTV, including its new mobile Trailer-Cam units, represents a powerful tool for investigations. The mobile Trailer-Cam units, which deliver image streams via a mesh network, are designed to work in concert with Darwin’s existing 190-camera public surveillance solution.

Mark Swan of MCS and Keith Bear of STS, designed the customised Trailer-Cams in collaboration with NT Police Technical and CCTV Units to suit the requirements of the NT Police. The new units needed to integrate with the existing 10 Trailer-Cams MCS built for NT Police previously. MCS designed the trailers and their components, while STS designed the mesh network.

“MCS is currently building 6 specialised Mobile CCTV Trailers worth over $500,000,” Swan said. “Some trailers will have the latest thermal PTZ cameras fitted along with some special routers, antennas, and software. MCS also has 3 new Trailer-Cam models to be released soon and these new designs will be state-of-art in features and equipment.”

There are 190 static public surveillance cameras in NT and last year they captured 3500 crimes, including anti-social behaviour, hooning, and the activity of graffiti artists.

“Each unit costs around $120,000 to build, an investment Territorians will appreciate, given it provides a tool that no other jurisdiction in this country has,” said NT Police Minister, Peter Chandler. “If we have a suburb where there is some youth offending, we’ll park them up there and let them know we’re there monitoring their behaviour.”

While some of the mobile CCTV trailers have been funded by the NT govt, others are being funded by the Attorney Generals Department’s National Crime Prevention Fund, which is funded under section 298 of the Proceeds of Crime Act 2002. The NCPF is a purse put aside to address gang violence and street crime. The NCPF’s security-related infrastructure grants also supported environmental enhancements using CPTED principles at trouble spots, including fixed and mobile CCTV systems, lighting and other initiatives.

When setting up the NCPF, AG’s Department insisted that projects addressed the priorities of the programme, had clear benefits for the broad community, had well-defined and achievable objectives, and established performance measures to assess the impact of the project. They also need to have support of multiple stakeholders – including local police.

The new mobile units include 1 fixed bullet camera with motorized zoom and focus, as well as a PTZ camera with 36x optical zoom, IR lighting, video storage on board, remote access via wireless mesh and 3G, a PA system delivering automated messages, solar arrays and battery storage. Each trailer-based unit costs around 120,000 to build and some also incorporate thermal cameras.

Trailer-Cam allows operators to locate a unit quickly and easily, then access the cameras remotely from any authorised device, with alert emails and SMS sent direct to anyone. Motion-activated infrared cameras look after the night time activities from up to 150 meters away, while a Geo-fence allows for activation of alarms and sirens for per-determined set points.

From an operational perspective, Trailer-Cam delivers elevated 360-degree views, has the ability to record high quality video in dark environments, can Sense movement and motion, even in areas out of camera’s field of view. The unit records all footage in HD with instant alarm notification and post-event evidence. Trailer-Cam can complement and replace traditional static security guards, mobile patrols and fixed CCTV cameras in security, constructions, event and traffic management applications. The units are independent Mobile CCTV Stations that are capable of recording and transmitting live video footage across NextG mobile networks Long Range WI-FI, if in remote areas, using satellite options.

Each Solar CCTV Camera Trailer has its own internal on-board computer/NVR which can be remotely and securely accessed from any computer or mobile compatible device, with an internet connection from around the world. The NVRs also allow for a Wi-Fi log-in application within proximity ranges. Live footage can be viewed and monitored with event recording alarm warnings, sirens, lights, etc while also allowing simultaneous secure viewing by third parties.

“One of the significant differences between existing units currently on the market and the Trailer-Cam is use of 100 per cent solar powered technology,” says Swan. “The solar powered CCTV camera trailers are self-sufficient in operation for months without human interaction or mains power connection. Additionally, all our solar CCTV camera trailers can be fitted with PA speaker systems that enable remote or motion detected verbal warnings to intruders.

“Mobile Camera Security is a pioneer in designing and manufacturing Solar powered CCTV security trailers in Australia. All R&D is done inhouse and we don’t employ outside contractors to fit out or test any equipment,” he said. “This is an advantage to us and our clients as we will only use the best available products to complete our world class show case. We wire and install all equipment ourselves and know every wire, lead, and fuse in the system and all electrical wiring, DC or AC, is Australian Standards-compliant and tag-tested by independent electricians.”

According to Swan, the NT Police contract is believed to be Australia’s largest single order ever for mobile CCTV trailers.
“MCS is proud and honoured to be chosen for this project,” he said.

Features of Trailer Cam include: