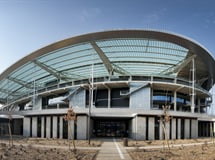 MMArena atLeMans, a multisport stadium designed for hosting a variety of sporting eventssuch as soccer and rugby, can accommodate 25,000 spectators. This can beincreased to 38,000 seats for concerts, shows, operas, etc. The venue also hasover 3,000 square metres of exhibition rooms and reception areas for meetings.

This was thefirst time in France that a government-private sector partnership was used forfunding such a project. Like many stadiums in Europe, for instance the AllianzArena in Munich and the Emirates Stadium (home of Arsenal Football Club) inGreat Britain, the MMArena is jointly funded by the region, the city of LeMans, the private corporation VINCI, and a private sponsor, in this case theMMA Insurance Group, investing $EU3 million at the start of the project, then$EU1 million a year for 10 years.

There are 106video surveillance cameras, including 104 new Sony IP cameras networked on afiber optic loop and controlled by Milstone’s XProtect Corporate videomanagement software, the latter chosen for its advanced open platformarchitecture that guarantees client’s scalability and sustainability of theirinvestments.

“This openplatform aspect of the solution was absolutely decisive in the clients’choices,” says Garnier.

According toVincent Chassac, technical manager of the Le Mans Stadium operating company, a100 per cent subsidiary of VINCI which has managed the MMArena for 33 years,the highly advanced technology of this video surveillance system is impressive.

“We had neverseen video surveillance as advanced as this before, in terms of the quality ofthe images as well as that of the software, and all of its possibilities andergonomic aspects that fit our needs so well are what convinced us,” Chassacsays. “It has an approach that makes it user friendly.”

The camerasmonitor the players of the visiting and home teams, referees, VIPs, localspectators and visiting fans in and around the stadium, including theticketing, security check, food and drink vending zones. Each situation thatneeds surveillance is been individually scrutinized.

This includesarrivals of the buses with players of the visiting and home teams and the fans,players going back and forth from the field to the locker rooms during warm up,spectators during the game, players and referees leaving before the game, toand from the locker rooms to the field during half time.

This coverageincludes leaving after the game, exiting from the field or the stands,departures of the buses with players, fans and officials from the secureparking facility. At times various cameras are dedicated to spectators movingagainst the flow of entering and exiting traffic.

The use of HDcameras and mobile domes with a high zoom factor enables identification inaddition to detection. The choice of high definition for numerous cameras wasdictated by the desire to monitor and be able to identify all of the visitingfans from the time they leave the bus until they return to it, while they arein the ticketing and security check zones, the bleachers, bathrooms and opensquares, and also in the event of early departures due to dismissal or injury.

The XProtectCorporate software manages the standard and high definitions of the videostreams with the same performance. All of the images are H.264 compressed,which offers the optimization of bandwidth use and video data storage.

According toFrédéric Tant, assistant operations manager of the Le Mans Football Club, thequality of both the live direct and the recorded images, as well as therecording capacity are ‘top of the line’, and ‘simply spellbinding.’

XProtectCorporate is currently connected to an XProtect Smart Wall module forcontrolling 2 image walls, while the security is equipped with 47-inch full HDscreens for displaying multiple images or one full screen image. The images areaccessible from a total of 4 workstations.The system itselfhas a high level of security. Two recording servers exist on the network, aserver for managing the SQL database, HP ProLiant servers for storage, andnumerous switches are located in a bay in an area secured by access badgecontrol.

This intricatemanagement of user rights enabled by XProtect Corporate was one of the keyfactors in the decision process. Personalized parameters and rights can beassigned by user group, by user, and by shift, with administrator rightsreserved for the owner, and every interest group has access to the controls oftheir particular system at all times.

“Just one day oftraining was all it took to be ready to use the system,” says Tant.”The main advantage of this system is that it is very manageable. It iseasy to use, and adaptable by those who are not experts. It can be manipulatedvery fast with the mouse and onscreen controls.”

“We were able tocreate video scenarios quickly for each camera group, according to times andsituations such as arrivals and departures to and from games. This enabled usto save a great deal of time.”