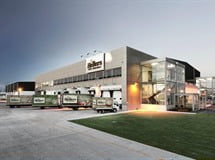 HELLERS Ltd is New Zealand’s largest producer of bacon, ham, and small goods. Its production facility at Kaiapoi, outside Christchurch, operates 24 hours a day. Safety of the company’s 400 staff is a major concern and a recent series of thefts and harassments prompted the requirement for a security system to ensure the safety.
Hellers required a CCTV system that could provide clear footage in low light conditions, could be installed easily and without expensive cabling and power supplies, and was cost effective to store, playback, and monitor. The cameras selected were also required to be strong and vandal resistant.
It goes without saying that the site demanded a rugged solution with the ability to handle extremes of weather, low light and backlight, depending on the location of camera installations. In a number of areas Mobotix hemispheric cameras have been pole-mounted to cover entire rooms.
Hellers’ founding partner, Todd Heller, met with John Hurford, managing director of Mobotix distributor Network Imaging Solutions, on an overseas trip. Heller was so impressed by the technology described by Hurford that he instructed his IT department to investigate the Mobotix solution on his return.
Hurford recommended 10 M12 DayNight cameras to cover the car parks, entrance gates and to provide staff the personal security that the company required. When the cameras were installed Hellers management saw the quality of the images, ease of installation, and simple viewing interface they immediately recognised further potential for the system.
“We realised that the cameras could allow us to improve the business operation as well as increase the safety for our staff,” Heller said.
Due to the easy to use and freely available API built into all Mobotix cameras, the Hellers IT department was able to create a custom integration with the company’s recently installed Cardax access control system. This integration allowed the use of the cameras as secondary confirmation of actions and has been especially useful in verifying staff claims when the time and attendance system has failed.
Hellers saw many opportunities to apply the unique Q24 Hemispheric camera to process improvement in the company.
“The Q24 allows us to see all corners of a room from a single camera, while still providing great quality zoomed footage,” said Heller.
“Through the application of these cameras, we have been able to identify error or problems in our processes and improve them, as well as identify issues that need to be dealt with.”
On one occasion, the camera allowed identification of a staff member who was incorrectly cleaning a machine, resulting in thousands of dollars in repair costs. Once identified, the staff member was able to be re-trained to prevent future incidents.
“The savings we have seen from production improvements and problem reduction far exceed the initial investment installing the system,” says Heller.
Thousands of items are shipped from the various Hellers warehouses daily and inevitably problems sometimes arise.
“We had situations where customers had complained that incorrect items had been shipped to them and no way to verify the movements back at the warehouse to isolate when the mistake had been made” Heller said of the problems.
“By installing high resolution cameras on each of the loading docks, combined with cameras covering the picking areas, the warehouse manager is able to confirm what products have been loaded onto which trucks.”
This additional information has also been used by Hellers to streamline the picking process, allowing the warehouse manager to restock the pick-faces more efficiently. During the recent Christchurch earthquakes and subsequent aftershocks, footage from the cameras was been used to evaluate the impact on the facility, including any damage or movement in heavy racking and large machinery.
“Because the cameras are powered with PoE, a relatively small UPS was able to keep the system operation through the power outage that followed the earthquakes,” Hurford says.
“This allowed uninterrupted coverage of the factory and assisted in the engineering assessment of the facility.”
Hellers are continually looking at ways to improve their processes and increase the efficiency of the operation, installing cameras along the production line. Supervisors are then able to monitor workflows from these cameras and identify bottlenecks and inefficiencies. The cumulative total of these small individual savings can total many man hours, which is reflected in real cost savings.
“Every day, someone in the organisation uses the system,” Heller says. “This could be a supervisor checking on issue reports in the production line, clarifying the circumstances of injury or accidents, or monitoring production lines to ensure correct processes are followed at all times.”
With the decentralised Mobotix concept, a high-speed computer and optional digital long-term storage is built into every camera, providing several days of recording time. The PC and the video control centre now serve only for viewing and controlling the cameras (PTZ), not for analysis or recording. This makes it unnecessary to purchase expensive video management software, as the most important and computer-intensive functions are already integrated into the Mobotix cameras.
Hellers has over 70 cameras installed on site, recording them to two 12TB network attached storage arrays for up to 8 weeks of archive footage. Thanks to the decentralised processing and buffering architecture of the Mobotix cameras, bandwidth requirements are minimal and short term network or storage issues do not result in lost footage.
In conjunction with improved fencing and gates, the camera system ensures security of staff, their property, and the factory. The cameras have also been used to provide evidence to police in traffic incidents and to determine fault when damage has been caused to vehicles. The system has even been used to convict cable thieves on the property.
“We have been very happy with the system and recognise the benefits of using video to improve many aspects of the company, not just as a surveillance tool,” said Heller.