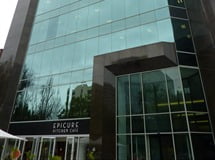 WHEN I arrived on site for a demo of the system, I was impressed with snappy decor of the lobby and blown away by the system itself, which takes integration to a level I’ve never seen before. Nikos Property Group had the foresight to enable the building with building technology building blocks that would allow a tenant to further develop the building into a world class facility.
The base building security, mechanical services, electrical metering and lighting controls were all developed on an IP Platform allowing an integrated services delivery model to be further enhanced by the fitout. Lawrence Katz, director of Omnisystems Engineering Consultants (OSE), was appointed as the Building Services Architect together with the Sokolski Consulting Group (SCG) as the Services Engineers to deliver both the base building upgrade and the integrated fitout in record time.
It goes without saying that implementing integrated communications network (ICN) methodology is critically dependant on the level of investment from the owners and the services contractors. Getting system-wide consistency is crucial, too. The appointment of Katz as superintendant and lead consultant for the base building services engineers and the fitout meant the technology hurdles were easily overcome without the normal silo approach that often hamstrings ICN projects.
Importantly, Katz was on the Westfield D&C team as building services architect for the Sydney City Project as well as a similar role for the North Wharf development in Auckland. He says these experiences allowed the project to progress and be delivered within the extremely short program time.
“Integrators Australia, as the base building integrator, was the lead technology integration contractor for all IP based services, access control, intruder detection and CCTV systems as well as delivering lighting control for the Eascom Team, with sub systems all integrated on the base building infrastructure,” Katz explains.
“Eascom Electrical was the electrical contractor and OP Industries was the mechanical services and controls contractors. Omnergy was the metering contractor as part of the Eascom team. All mechanical and electrical services were renewed, from the main switchboard to the boilers and chillers. Lift car and machinery upgrades are in the final stages of delivery.”
Unlike many installation outfits, Integrators Australia installs IP-based electronic security and building integration solutions that are designed to simplify installation and operation, reduce costs and to eliminate, as far as possible, expensive maintenance contracts governed by proprietary formats.
This IP-focus is at heart of all contributions to the building’s solution, including Genetec’s powerful management system, the Axis cameras, the VertX access control solution from HID. All are vital to a solution that I think is probably the best and most complete building integration I’ve ever seen.
Driving this integration is Genetec’s Security Center management solution, this system has half a dozen sub-systems woven into it and expressed in their entirety on each workstation at the concierge desk. The primary systems handled by Genetec Security Center include video surveillance, access control, cardholder badging, visitor management, lift control, intrusion detection, lighting control and air conditioning.
Supporting Security Center are 54 Axis cameras (720p inside, 1080p outside), including PTZs with image stabilisation, while access control is HID VertX with HID’s SE readers.

“Genetec SC5 is task-based and has a Windows 7 flavour. This system is flexible and offers powerful integration, which is what we are exploiting”

Walking through the lobby and up to the desk it’s obvious that security is pervasive. I pass external and internal cameras – lots of them – and there’s turnstile access to the lifts – not common for a medium-sized building like this one. Looking at the turnstiles I can see there are HID readers fitted on both sides.
According to Katz, Nikos Property Group’s intention was to install a high quality integrated security solution that would easily integrate with all other building services using “out the box” interfaces to keep things simple and cost effective.
“We searched long and hard and the Genetec system is what we came up with. It’s certainly the best system of its kind I’ve ever worked with,” Katz says.

According to Integrators Australia’s Dean Monaghan, what the customer  is running is Genetec’s Security Center 5.
“SC5 is task-based and has a Windows 7 flavour,” Monaghan explains. “This system is flexible and offers powerful integration, which is what we are exploiting on site.
“And when it comes to operating the system, tasks can be distributed between groups – concierge staff, security staff, security admin staff and installation staff – in terms of the permissions they are very granular.”
Given Security Center 5 is really the heart and soul of this system, it’s worth spending a little time considering its fundamental capabilities. First up there’s Security Desk – the unified user interface of the Security Center solution. Security Desk is design for task-based control and monitoring. A unified configuration tool makes all config much more streamlined with common entities being used multiple times within video, license plate recognition and access control.
When it comes to intrusion system integration, it’s possible to integrate third-party intrusion panels and perimeter detection systems. Operators can run reports on intrusion panel events or alarms and best of all, view video tied to intrusion events, and arm/disarm intrusion devices either through automated scheduled tasks or manually via the user interface. This is a very helpful feature for a site like this one.
Centralized alarm management means you avoid the traditional approach of separate alarm monitoring applications with unsynchronized data for different security systems. Administrators can configure, monitor and respond to alarms for an entire security environment. Advanced reporting capabilities allow generation of a variety of integrated LPR, video and access control reports without the use of external third-party reporting tools.
Neat too, is local video caching and buffering allowing all-frame video playback. It means operators get faster access to recorded video as Security Center buffers video locally on the client workstation. This reduces the amount of retransmission that is typically required for video playback and thereby minimizes bandwidth usage.
Visual tracking is another cool feature that lets users switch from one camera to an adjacent camera within a viewing tile when tracking a suspect, either in real-time or playback mode. And if you want to get clever, Genetec’s Software Development Kit allows integration of building management systems, enterprise resource planning systems, or development of custom business applications with the Security Center’s open SDK.
When it comes to directory integration you can connect to multiple directories and centralize the management and synchronization of Windows user accounts with the Security Center’s user and cardholder accounts. This allows provision of single sign-on capabilities and ensures newly created Windows users automatically inherit the proper physical building access rights.
Reliability is enhanced by a built-in failover mechanism and redundant archiving capabilities. A standby server can be setup and when the primary fails, the standby takes over so no data or video is lost. Users can deploy off-the-shelf industry standard failover solutions as alternatives – this is exactly what Integrators Australia has done on site.
Version 5.1 of Security Center offers cool stuff like real-time health monitoring of roles, client applications, edge devices and more. This allows administrators to proactively manage the health of their security platform. New tasks such as health history and health statistics reports provide valuable information about past and current performance of the platform.
There’s also uninterrupted video streaming to the Security Desk even if the Directory or other critical roles become unavailable. Security Center 5.1 also offers a new global cardholder management feature for synchronizing cardholders, credentials and other data between remote independent sites and a central location. That’s nice for tenants of a big site like on this site.
Having admired the symmetry of the building and its fittings, we take a run through the software. Monaghan says the beauty of the situation was that the tenant had brand new security staff straight out of the academy and this meant they picked up the management of the system very quickly. Training took place before the building actually opened, he says.
“Operationally, staff can use most functions with the exception of reports, which security managers handle,” he says. “We can give security staff limited access or extended access to system functionality. Every concierge operator has access to a selection of external cameras that we have selected to be monitored.”

“An obvious benefit of integrating CCTV and access control with SC5 is that we link the door entity to the camera so it’s nice and slick for the operators to use.”
Monaghan says security officers were personally involved in the process of fine tuning certain elements of the system.
“We gave them the front screen populated with the key external cameras and then they chose the best cameras to work with after hours on a screen of their own.
“They can mix and match views – bring up the cameras they feel they need to monitor depending on the demands of their shift and changing situations,” he says.
Video surveillance on this site is overwhelming.
“We have strong coverage outside, in the carpark, around the building, at entrances, the lobby, in the stairwells and on various office levels. There are 5 cameras in the cafe here on the ground floor,” Monaghan explains.
Monaghan says the fact security officers can use check doors and lights and monitor access and alarm events from the concierge desk is also excellent.
“The SC5 integration makes it so easy. There are shortcuts. Hot actions – these make it easier to action common functionality. The air conditioning integration also works well – it’s perfect on the weekends – as long as you have access you swipe your card, push a button and on it comes.”

“You can see here the advantage with the integration between the access and video is that when we want to check we can just click on each event and look at the video and do a matchup, all on the one workstation”