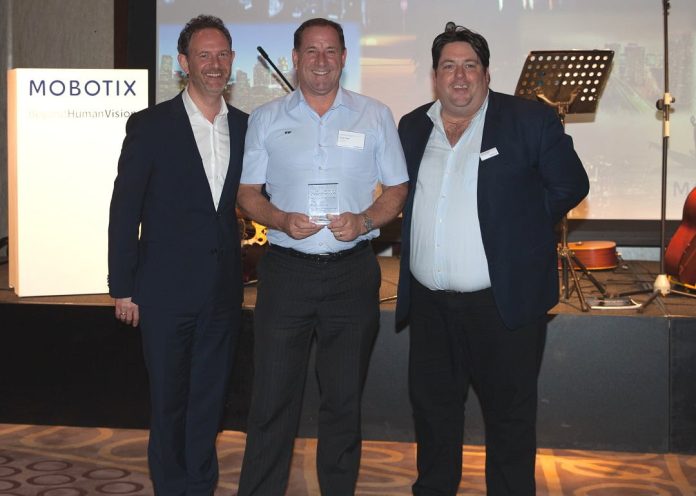 KIWI security integrator and SnapperNet partner, VIP Security, has received the top innovation award for 2018 at the annual MOBOTIX Asia Pacific Partner Conference in Malaysia. It’s the first time a New Zealand company has been honoured with the award.

The Christchurch company, which has been a SnapperNet partner since 2009, beat out all other Asia Pacific MOBOTIX partners to take the award for its in-vehicle surveillance system developed specifically for a New Zealand bus company. The system, currently in use in more than 110 buses, enables the bus company to quickly and easily access high quality video, wirelessly, in the event of any incidents.

David Proud, VIP Security managing director, said the win was especially pleasing as it recognises the skills and expertise of the staff at VIP Security – which he describes as a “quite bespoke, niche integrator” – and was up against much larger multinational companies with $100 million turnovers.

“Our award recognises the innovation and design aspects of something quite complex,” Proud said. “The project scoping, design and implementation were undertaken by VIP’s engineers and technicians, with the assistance of SnapperNet and MOBOTIX, which provided additional support and expertise as the need arose.”

The surveillance system required extensive technical design on the part of VIP Security. Previous bus systems required footage to be physically removed from buses by taking hard drives or memory sticks off the bus. The new solution, which has been in use since last year, sends data wirelessly and is exceeding the 95 per cent recoding reliability KPI set by the client, no mean feat for mobile recording.

“We had to work out rules and parameters to ensure a stable wireless connection and overcome issues like dropping voltages when the bus engines turned on,” Proud said. “We also created our own software to monitor the cameras and provide email reports and video snapshots of all the buses and cameras as they log in, with exception reports and status updates to ensure everything is ok.”

The system enables the bus company to quickly and accurately check any incidents reported by both internal staff and the public, while also ensuring drivers are adhering to compliance requirements. Proud says system usage has increased 100 per cent over that seen with the previous system, with the increase equally weighted between internal requests – such as buses being hit by other vehicles – and external requests, which may include complaints from the public.

“VIP Security is looking to sell the product to other companies both locally and internationally, and it is also a solution that can be easily adapted into other mobile solutions,” Proud said. “We’ve been looking at the transport market for some time, but deliberately held back waiting for the right technology.

“When MOBOTIX came out with their solid state intelligent cameras, we knew it would be the perfect partner for this sector because of the reliability and usability, which are critical factors for this sort of offering.”

“They have set a high benchmark as far as good quality video and – most importantly – getting access to that video easily and quickly on demand,” he said.

“They can be used for many things in various vertical markets, and this shows how partners with initiative and IT expertise can win projects over and above other brands because of what you can do with these cameras he explained.

“They didn’t just go to the bus company and say, ‘we can give you high resolution images’, which is what everyone does,” Fairclough says. “They offered to solve problems for them.

“It’s worth noting that last year’s winner of the award was Singapore Coastguard, which uses MOBOTIX to defend the coast of Singapore. That solution went on to win the global MOBOTIX Innovation Project of the Year award, which VIP Security will now be receiving a nomination for this year.”