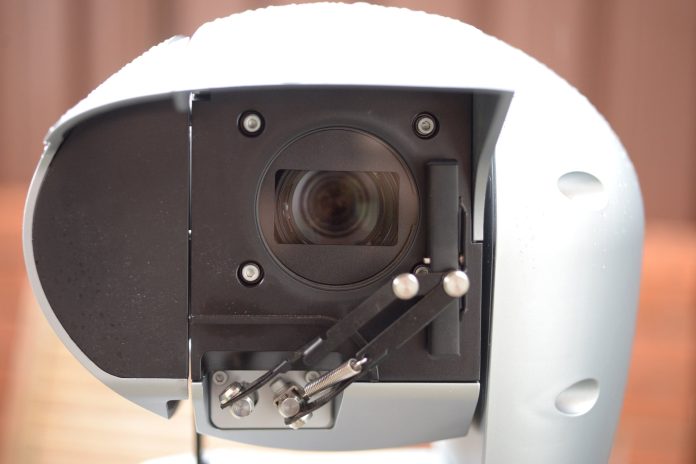 NOT surprisingly, I was very interested in the performance of Panasonic’s lovely Aero PTZ when the boys from BGWT bought it around to the SEN office and after spending a couple of days and an evening driving the camera, I formed a reasonable idea of where its core strengths lie. But before we get into the test, let’s take a look at Panasonic Aero’s specifications.

According to Panasonic, the Aero PTZ is designed for applications at sea, around ports and bridges, and in any other applications that experience extreme weather, including snow, rain, gale force winds (200kmph or 60m/s), and extreme temperatures. To handle these conditions, the camera has a fibreglass body for corrosion resistance and is designed so its shape reduces wind drag and sheds snow, water and dirt. There’s an integrated sunshade, a defroster and a built-in wiper to help with this.

Also assisting is the pedestal-mount design of the camera, which made it tougher for me to test as I could not hang the camera in the usual way but pedestal designs provide a very secure base for attachment in extreme conditions. And while the body-work of this camera is glass fibre, the metal base is heavy – I placed the Aero on the roof of the office and need to reach up and out to do so – not easy.

Panasonic’s Video Stability Augment System (SAS) is claimed to virtually eliminate camera shake and the camera has has gyro-sensors, to minimise the impact of external vibrations; and is equipped with ‘active sense’ technology, which responds to external conditions to initiate the built-in wipers to keep the lens clear in rain and snow, the heater to ensure internal electronics are operating at the optimal temperature and the defroster to keep the viewing lens clear.

The Aero-PTZ delivers 1080p resolution at 60fps with a 30x optical zoom lens. The camera is IP67 rated, which means it is both water and dust proof and vandal proof to IK10 standards. The temperature range is -50 to +55C, which is strong for a PTZ, which has many more moving parts than a simple bullet or dome. The sphere pan-tilt mechanism allows endless 360-degree panning and there’s a +/- 90-degree tilt range. In addition, the super dynamic function ensures a wider dynamic range compared to conventional cameras. IR range is 150m – that’s solid.

Aero’s physical dimensions are 220mm wide x 450mm high x 266mm deep and the camera has a weight of 8kg. The main body of the camera is high-strength resin, while the base seems to be coated aluminium alloy and the front screen is clear glass.

I started out testing the Panasonic Aero taking in the district view. It’s a big view with objects from 2m (fence) all the way to 2000m (Centre Point Tower). We’re testing via the camera browser, which is a full management solution for this camera with tons of functionality built into it. The camera is sitting on SEN’s office LAN and I’m driving it via a dedicated Dell 9020 server with no other cameras connected. PoE is coming from a NetGear switch and there’s a 60W Planet injector installed in the cable run to power the PTZ functions. 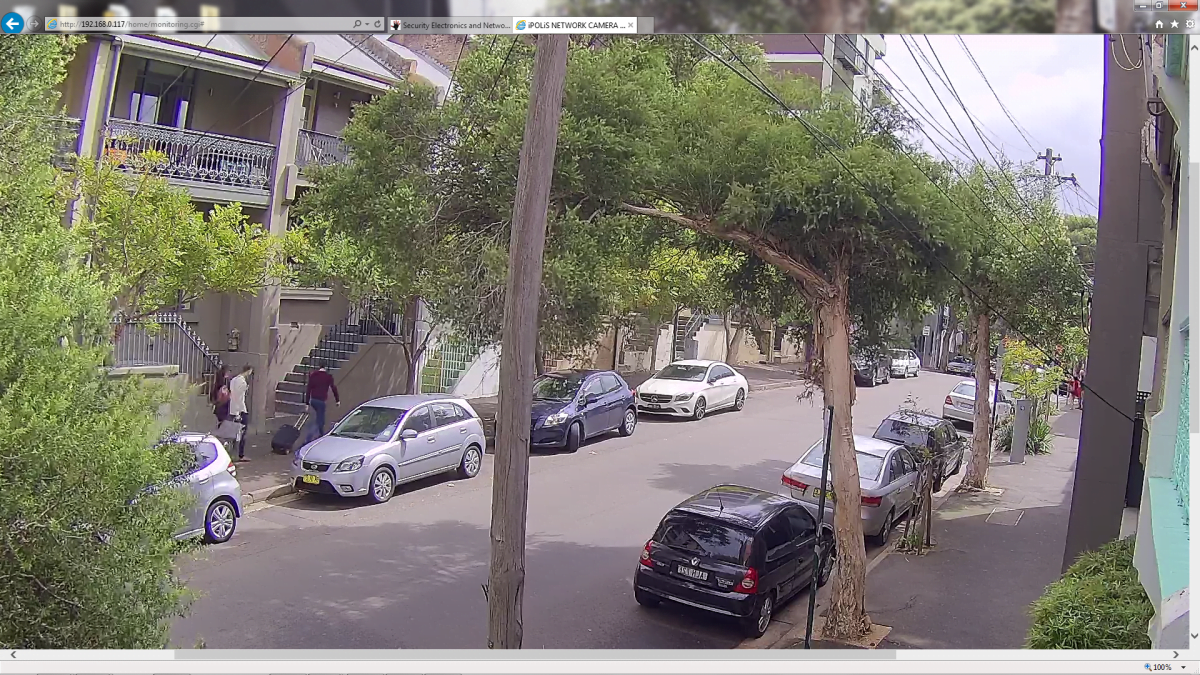 First, I look at the wide-angle view. Even at the widest focal length of 4.3mm there’s virtually no barrel distortion in this image at all – maybe it’s 1 per cent but it might be less. That’s good performance indeed. The image is a little soft at this focal length though noise levels are relatively low. It’s very bright out here – around 80,000 lux – and it’s likely the WDR function is having an impact on sharpness, which is typical.

When I start zooming, panning and tilting with the Aero, pow, its operational functionality socks me in the eye. This is a camera designed to be driven in real time on very large sites or in public spaces. Utilities, ports, stadiums. Hyperfocal distance is about half a metre by my estimation but when you’re zoom in on object in the near middle distance, you still get reasonably good performance in the background, which is nice to have.

Something that is noticeable with this camera wide open at F1.6 and a focal length of 4.3mm, is longitudinal chromatic aberrations, which are visible almost exclusively at the edges of the scene to a depth of about 8 pixels. As you’d expect, these CAs are present to a lesser extent at the long end with aperture at F4.7 – they are about 6 pixels deep. You expect some CAs around high contrast points with a tele lens. Colour rendition is good – in the presence of WDR and when light levels fall, and the performance of the camera in variably lit scenes with 75,000 lux of sun and 10,000 lux of deep shade is solid, too.

Because it’s there, I swing Aero around to view Centre Point Tower at 2000m at a focal length of 129mm– it’s the best image I’ve had of the tower out here – there’s not really any sign of pin cushion distortion, either. Because we’re dealing with a 1080p sensor, digital zoom offers less than you expect with the Aero and you really need to use its optical capability as much as you can. I also play with the 90-degree tilt, which is great. Between the tilt and the 30x zoom, I get views of the towers around me I’ve never had before.

Once I’ve started with the PTZ, there’s no stopping me. It’s just so powerful, bringing the district into sharp relief and letting me take a closer look at some of the Surry Hills’ wildlife. But because the camera is installed on the roof of the office instead of over the lane, my ability to explore camera performance in the presence of movement is limited, so I take Aero up onto the balcony out the front of the office. Mounting is a compromise again – I can’t hang the camera off the balcony, but the power of the PTZ gives me almost everything I need even with the camera mounted a metre or so behind the usual position.

You can see those CAs here…

Sitting down at the workstation I notice CAs again, some blockiness in uniform surfaces as the camera makes processing generalisations, and some stepping of moving objects – cars and people. I’m at 30 frames per second but there is a lot of tree movement out here. There’s a tendency to mild blooming on bright points at the widest angles at apertures of F1.6. My assumption is that it’s the sensor but I don’t see it at night, so it’s more likely the processing decisions being made by the camera engine at my default camera settings – lighting is variable in this scene, with deep shadow and full sun.

Zoom on the street is a real strength of Aero…

With Norman out the front, I move him up and down the street to get a sense of image quality and zoom capability. It’s good at the wide end, better in the middle and best at the long end – you expect that but with a PTZ this flexible and easy to drive, the image quality at the long end really stands out. WDR performance is these conditions is good, too. It’s 75,000 lux in the sun but aside from some CAs on high contrast points, I have no trouble getting portrait quality imagery of Norman.

When it comes to motion blur, it’s there at wider angles of view with moving traffic but as you wind in the optical zoom you lose motion blur in good light. The further you zoom (the narrower the angle of view), the less motion blur you get – I snare plates at 30kmph at focal lengths of around 60mm and face recognition is there in good light, too. It’s ok at widest angles and excellent at the long end. I note that it’s when the sensor is really loaded with movement at wide angles that blur and a little stepping creep in.

The strengths out front on the street include a complete lack of barrel distortion, a combined pan, tilt, zoom and focus speed that is simply outstanding. With this camera, you define a square in the field of view and 5 seconds later it fills the frame in sharp focus – that’s brilliant. WDR performance is pretty good, light/dark area performance is generally good.

Here are those longitudinal CAs again…

As light levels fall, I start to lose plates – first of faster moving cars, then slower moving cars, then pedestrians at the wide end. Zooming in further helps until light levels fall below about 1000 lux and I lose them altogether. As light levels drop further down towards a minimum of 7 lux, the shutter speed slows and blur creeps in with vehicles and pedestrians but face recognition is still court admissible at mid focal lengths to a distance of about 12 metres and further out at longer focal lengths.

There’s not a lot of noise in the low light images and colour rendition remains good, with the camera moving the cut filter and going into low light mode at around 10 lux. Something to note about performance in the street is that there’s too much light out here to make much of the 150m IR.

Panasonic Aero is a rugged camera that puts a lot of power into an operator’s hands. Its specific mounting design makes it ideal for pole-top or pedestal mounting on large and environmentally challenging sites where it can look in all directions, including upwards. As you’d expect with an IR-enabled camera, unassisted low light performance is less strong than the leading large sensor low light designs but there are plenty of positives to offset this. The manageability of its pan, tilt and that big zoom with fast autofocus in all weather conditions is Aero’s greatest strength.

Features of Panasonic Aero PTZ include: