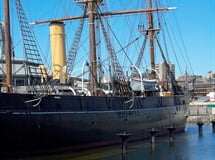 RRS Discovery was declared one of the most important historic ships in the United Kingdom by the National Historic Ships Committee in 2000. Visited by 60,000 people annually, she is an iconic vessel with a history filled with some of the most famous polar explorers, such as Captain Robert Falcon Scott, Ernest Shackleton and Sir Douglas Mawson.
ADT Fire & Security has formed a partnership with the Dundee Heritage Trust to help preserve and protect this grand voyager. The Dundee Heritage Trust and ADT formed a partnership to sponsor the installation of a new radio fire protection system through the Trust’s Heritage Supporter scheme.
ADT has replaced the older dual fire system which connected the ship’s alarm to the Discovery Point building. The new installation from ADT monitors the vessel independently of the main museum using DualCom GPRS technology. This updated system ensures the RRS Discovery has a top-level defence against the ongoing threat of fire, reassuring the Trust that the ship is protected year round.
DualCom GPRS is a high-speed technology used to send and receive packets of data with reliability and speed. GPRS is charged as a fixed tarrif, meaning the device can send and receive an unlimited amount of data at no extra charge. The use of this affordable new technology brings dual-signalling to a market previously using single-path technology on a cost basis.
The marine environment surrounding the RRS Discovery as well as the conserved interior of the ship demands a wireless approach to fire prevention. Taking this into consideration, ADT ensured high-end technology was installed with minimum disruption to the vessel’s internal and external structure.
“The RRS Discovery is the only vessel in existence built to that specific design and is the organisation’s main asset,” explains Mark Munsie, Operations Director at the Dundee Heritage Trust.
“The Trust already has an excellent relationship with ADT, which secures and protects Discovery Point museum. We therefore saw ADT’s market leading expertise as the perfect platform to begin a partnership to secure and protect an important part of European maritime history. She is the pride of Dundee and an excellent example of our ship building heritage.”
“ADT is proud to be supporting an excellent charity that preserves such a significant part of history,” comments Stuart Douglas, general manager – Scotland, ADT Fire & Security.
“The RRS Discovery tells a wonderful story and we are extremely proud to be working with the Dundee Heritage Trust in providing the ongoing protection for this inspirational vessel.”
Linkedin
Facebook
Twitter
Email
Copy URL
Print
Previous article
India Temple Security Nightmare
Next article
Electronic Security On Mine Sites: Part 1