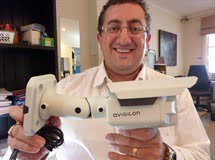 AVIGILON makes some really lovely cameras and this is another family of them. The Avigilon HD Bullet Camera comes in 4 models, 4 resolutions (1, 2, 3, 5MP) and 2 lens options – 3-9mm and 9-22mm. The 1 and 2MP models run at 30fps, the 3MP runs at 20fps, while the 5MP runs at 13fps – that’s still pretty close to live to the human eye.
Walking me through the new HD Bullet range at the SEN office is Avigilon’s Sean Borg and while I rip into unpacking the box, Borg powers up his laptop for a demo of some pre-recorded applications in low light, an area this IR-adaptive camera really excels.
As we work on our jobs Borg tells me that prices to the end user are variously $A1017 for the 720p version, $1166 for the 1080p, about $1300 for the 3MP and $1500 for the 5MP.
“Those are good prices, given the technology you’re getting. You’d pay similar prices for a camera alone at this quality point, discounting everything that’s inside the integrated housing,” he says.
By now I’ve got the HD Bullet out of its box. This is certainly an impressive bit of kit. It’s actually extremely compact for a 60m IR camera – no doubt – and while it has a solid feel the weight of its aluminium body is not extravagant – a bit over 1kg.
Today we’re looking at the 3MP WDR HD Bullet with a 1/3-inch CMOS sensor, motorised P-iris lens, and 2048 x 1536 active pixels. In the flesh, this is a sweet, tool-like design, with a great feel and the heft to handle serious knocks. You can generally judge the overall quality of a product by the effort that has gone into getting the simple things right.
I can’t see inside the housing but it’s likely the quality of the interior is high, too. The base plate of the camera bracket is a real giveaway from this point of view. Coming out of an already heavily sealed cableway on the sole of the base plate are flying leads including pre-terminated RJ-45, 7-strand data, as well as power. The base plate is chunky and the seals are thick.
Borg pulls the mounting bracket off the housing in a few deft moves to show me the connectors and ports.
“It’s always been the case that installers are seldom thought about in the design process but that’s not the case with Avigilon,” he says. “With the bullet camera there’s also a really neat feature – an RJ45 port tucked away underneath a secure weatherproof hatch that can be accessed directly without installers needing to remove the camera from the wall. You use it to do all your configurations locally.
“The mount itself is clever. It’s swings through 3-axes so you can install the HD Bullet camera on walls, hang it from ceilings or mount it on poles. It’s aesthetically pleasing – it’s a nice product – it’s something you’d have no problem hanging on a wall.
“The motorised zoom allows for remote focus and zoom and there’s also a cable entry notch on the side of the arm enabling installers to mount the camera on surfaces without through-wall access.”
Cool, too, there is a separate configuration panel at the bottom of the camera opened with a special tool. This allows installers to see status lights and access the reset button as well as get to that secondary configuration Ethernet port. This port allows installers to view the image locally while aiming and configuring the camera. Important for security, this feature can be disabled and enabled through the web interface.

Like other cameras in the range this 3MP WDR HD Bullet weighs in at 1.15kg, is powder coated in cool grey, offers 4 privacy zones, a minimum scene illumination of 0.2 lux in colour with the 3-9mm lens or 0.4 lux with the 9-22mm lens. Not surprisingly the unit operates at 0 lux in monochrome with its IR activated. Other features include motion detection with selectable sensitivity and threshold, operating temp of -40C to +50C and a 3-year warranty.
“One of the neat feature of the Avigilon HD Bullet camera range is adaptive IR,” Borg tells me. “Adaptive IR gives both long range and wide angle IR illumination and does so automatically as you zoom in and out of a scene using the motorised lens. The result is a consistent illumination through the image at every zoom position as well as effective illumination based on scene content.
“The adaptive IR works is by using different sets of 850nm IR beams to focus the IR illumination based on the image area,” Borg explains. “So if the lens is zoomed out the IR spreads the beam out evenly across the image. Then, as you zoom into the image from 3-9-22mm, the IR beam maintains the illumination area in line with the focal length to provide deeper illumination while maintaining consistent illumination over the entire scene.”
This is a great feature and something I’ve never seen before in an integrated IR camera. With traditional IR cameras there’s not the ability to change the IR illumination dynamically in sync with the camera’s zoom position. What this means is that other manufacturers pick a static area – typically the half way point of the focal range of the camera. As a result, if the field of view is wider than the static IR position, the edges of the image will be dark.
Also, when you zoom past the static IR position, a significant portion of the IR power is actually being used to illuminate areas you are not viewing – this reduces power and decreases range.
Adaptive IR focuses IR light where you are looking and that allows you to see further in complete darkness. The 3-9mm models you get 30m and with the 9-22mm models offer 60m of illumination – that’s great range in this compact form factor.
“This combination of wide angle and long range gives images good lighting across the entire frame, there’s not the typical tunnel-vision you get with many IR equipped cameras in external applications,” Borg says. “And the 1, 2 and 3MP models all have WDR allowing for advanced performance in challenging backlit conditions.”
“Better still, the IR also adapts to the changing conditions in a scene. When an object approaches a typical IR camera it will become saturated and this gets worse the closer the object gets. But thanks to the Bullet HD’s content adaptive IR, no matter how close the object gets to the camera it will never saturate the image, the camera will adapt.”
As part of the demo we look at some night-time scenes. The depth of field is probably 15-20m deep and 8-10m wide – it’s not a challenging scene for this camera in terms of distance but there’s plenty of information in the scene that the camera is digging out for us. The unit is running in monochrome and we can clearly see a cyclist in the lane about 5m from the camera.
Across the lane there’s a car parked outside a garage and we can make out the tiny street number on the door – that’s very good performance. We’re also getting the car’s number plate, even at an oblique angle. The camera’s view stretches off along a fence line down the lane with complete clarity. What’s most impressive is side-to-side coverage, It’s very good. There’s no dark circle around the scene caused by the usual static focus IR lens punching a hole in the centre of the scene.
Something else that’s of interest to me is that I’m convinced you could positively identify the face of the cyclist in the foreground, even in monochrome, the image is that contrasty. I look again and yes, if you knew this person or had their photo in front of you, you could recognise nose, cheekbones, line of jaw. That’s really very good. It means that instead of IR flaring off a face at 4-5m and rendering that data useless, the camera is giving images with real value to investigators from the front of the scene to the back.

“Adaptive IR gives both long range and wide angle IR illumination and does so automatically as you zoom in and out of a scene. The result is a consistent illumination through the image at every zoom position”

Load more
As this Camera comes in 4 models with 4 resolutions (1, 2, 3, 5MP) and 2 lens options – 3-9mm and 9-22mm there is a large range of options. The motion detection with selectable sensitivity and threshold, operating temp of -40C to +50C and the 3-year warranty make it a cost effective asset. There is no question that this is certainly an impressive bit of kit. It’s actually extremely compact for a 60m IR camera and while it has a solid feel the weight of its aluminium body is not extravagant – a bit over 1kg. Excellent product. Avigilon's New HD Bullet Camera