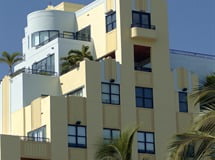 EVERYONE knows the Ocean Drive, the famous promenade for strolling in Miami Beach. Besides the palm trees, sandy beaches and turquoise water, the historical Art Déco district also attracts scores of visitors.
Just a few minutes away is the Ramada Hollywood Beach Resort, an extensive resort complex with hotel rooms, private condominiums and diverse shopping opportunities. The popular hotel is also equipped with cutting-edge security technology, thanks to a state-of-the-art video surveillance system by Dallmeier.
The Ramada Hollywood Beach Resort is an Art Déco-style hotel in Hollywood, Florida, located only a short distance away from the beaches of Fort Lauderdale and Miami as well as the downtown area which is characterised by its Art Déco buildings. The Ramada has more than 240 rooms and suites and also accommodates 150 private condominiums.
Additionally, the resort offers more than 14,000 square metres of shopping areas at the Ocean Walk mall. The resort’s various offers also include a pool area covering more than 1,200 square metres and a seaside bar with an affiliated restaurant.
The surveillance system used at the hotel comprises four digital Dallmeier multi-channel recorders and two single-channel units for simultaneous audio and video recording as well as a PView Station for evaluation of recordings and control of the system. The reliability and operating stability of the recorders was critical in choosing the Dallmeier products.
The hotel was further convinced by the straightforward operation of the system which even new employees were able to work with, following a brief training session. More than 60 cameras are installed across the facilities and provide high-quality images.
Owing to Dallmeier’s proprietary Cam_inPIX technology, the cameras are able to deliver detailed and true-colour pictures, even under the most difficult lighting conditions such as strong backlighting in front of glass facades.
Cameras monitor the hallways on all eight floors of the resort and the entrances on the ground floor are also permanently recorded. The reception area and the security areas are recorded with both audio and video data and the recordings are used to improve the general security as well as for training purposes.
The video surveillance system has also quickly proved cost effective. “Through installing the CCTV system we were able to significantly reduce our insurance premium and the number of compensation claims has also fallen dramatically from around 12 to 15 per year to just one or two,” says David Hess, president of the Schecher group of companies which operates the Ramada Hollywood Beach Resort.
“We clearly benefited from the Dallmeier video surveillance system as we have saved both time and money. Also, we are now able to ward off unsubstantiated claims and lawsuits,” Hess adds.
“One of our guests told us that his Rolex had allegedly been stolen from his room at around 3:15 pm,” explains Tony Brown, the hotel’s security manager.
“When we were looking at the recordings of the day in question, which had been recorded by a newly installed Dallmeier vandal-resistant UWDR colour dome camera, we saw the guest leaving the hotel at 5:30 pm with his Rolex around his wrist.”
The video surveillance system ensures that the Ramada is well-prepared for any future changes because all Dallmeier systems are modular in design. System extensions can therefore be easily carried out.

“We clearly benefited from the Dallmeier video surveillance system as we have saved both time and money. Also, we are now able to ward off unsubstantiated claims and lawsuits”