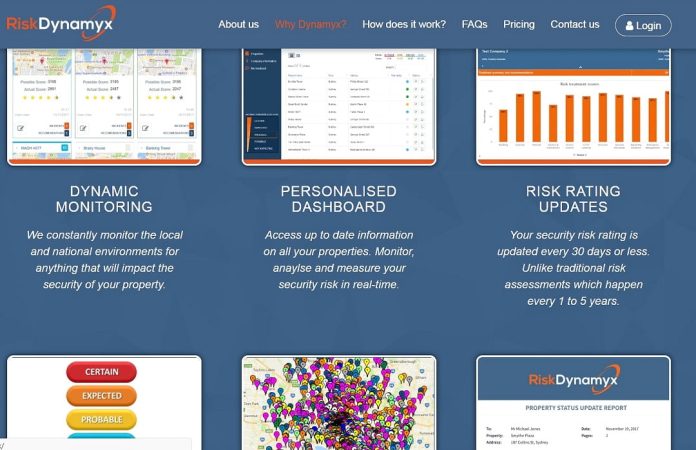 A WORLD-first security risk management tool will revolutionise commercial and industrial building security with real-time updates on factors such as local crime rates and terror threat level changes, according to Luke Percy-Dove, CEO of Matryx Consulting and founder of Risk Dynamyx.

The cost-efficient dynamic application includes an initial security risk assessment and then uses data and analytics to continuously the property and the local area.

Most large businesses and organisations have traditionally conducted comprehensive risk assessments every three years, with little if any consolidation in between.

Percy-Dove, says a rinse and repeat approach does not consider changes such as illicit drug problems emerging nearby.

“Yesterday’s security risk management practices are no longer adequate to deal with today’s threats and a changing world,” he says.

Other changes that raise potential security issues could include a group CEO moving office, an employee having a bag stolen, graffiti appearing on walls or syringes turning up in toilets.

Dynamyx will alert clients to such developments and/or changes to the National Terrorism Threat Advisory System. It will then advise on actions to protect the business, its staff and reputation.

“We can do that by measuring data and collecting data in a unique way,” Luke says. “The whole idea of Dynamyx is closely monitoring the local environment for change.

“At the moment, the big risk is people in motor vehicles. Next month, or next year, it could be something quite different. We need to be prepared. I think it’s flawed to think that risks only change every three years.”

Most Dynamyx clients will pay no more than they would for a traditional 3-yearly assessment, due to efficient technology and systems that are relatively low maintenance once the initial data has been collected.

“I absolutely believe that this is a better way of managing security risk,” Percy-Dove says. “If it’s no dearer and you’re up to date all the time, why wouldn’t you do it?”

Percy-Dove, who has almost 25 years’ experience in security as an independent physical security consultant, counter-terrorism security adviser, critical infrastructure security and CPTED adviser, spent 3 years developing Dynamyx to address the shortcomings of traditional security assessments and believes it is a world first.

“Pretty much as soon as I leave a property that risk assessment is out of date,” he says. “With Dynamyx, we take all that data, continuously monitor it for change and update it every month.

“We do this by measuring data and collecting it in a unique way. We’re also making that knowledge widely available to people in a simple and intuitive format. I’ve never seen anything like it.”

Find out more about Dynamyx here.