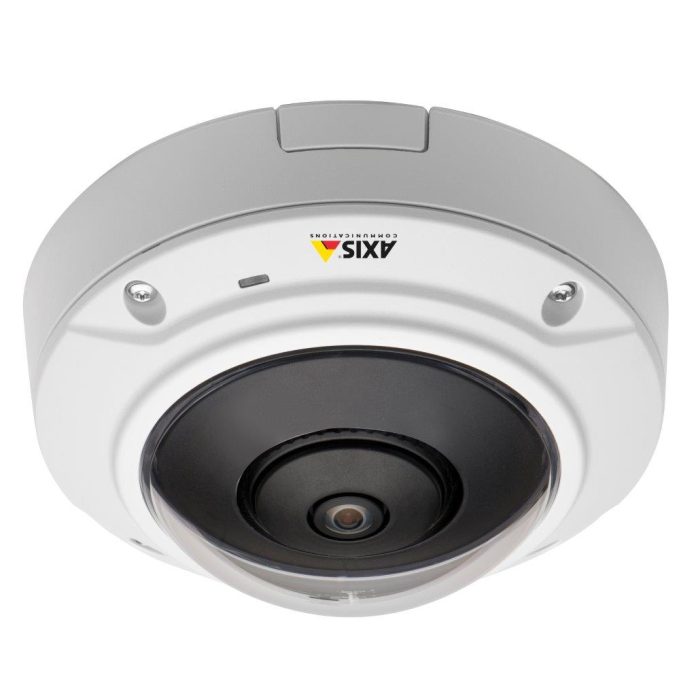 IT was inevitable that a camera with a 180-degree wide angle lens be developed. The combination of PoE, compact size, robust construction and a quality fish eye lens makes for an extremely capable camera that is perfect for applications demanding 180-degree views out to a distance of about 15-20m.
Their lens characteristics really are the key feature of hemispheric cameras. Among the first practical uses for fish eye lenses after their invention in 1906 was in meteorology where they were known as ‘whole-sky lenses’ and were used to study cloud formation. If you take the visual image in your mind of a whole-sky lens and turn it upside down over a scene then you get a very good impression of what these cameras offer.
Important to bear in mind here is that the 180-degree views we are talking about are the lower 180 degrees of a 360-degree sphere – that means a hemispheric camera with a 180-degree lens actually gives a 360 compass-degree view of a scene. If wall-mounted the camera may give 180-degree views and some cameras offer this configuration as a selectable option.
A great strength of hemispheric cameras is that they don’t miss any action in a scene – a person will not move from one camera to another as they would with fixed cameras or standard PTZ units. This continuity applies to recordings, too, and greatly enhances court admissibility of image streams.
A fisheye lens uses visual distortion to create a hemispherical view – what this means is that these lenses don’t give rectilinear images – there are no straight lines. Instead you get equisolid angles leading to a convex image. Hemispherical surveillance cameras use image correction to straighten out scenes when users zoom in. Some cameras do this so well their digital zooms appear flawless.
Things to bear in mind when comparing hemispheric cameras include the fact different fisheye lenses have different characteristic distortions – different lens mapping functions. There are variations in image quality that are best directly compared by objective test.
Hemispheric cameras with their wide angle views and fixed focal lengths are very much all rounders. They are perfect for a range of internal applications where a complete synthesis of a scene is most desirable and where distances are not so great that face recognition is impossible. 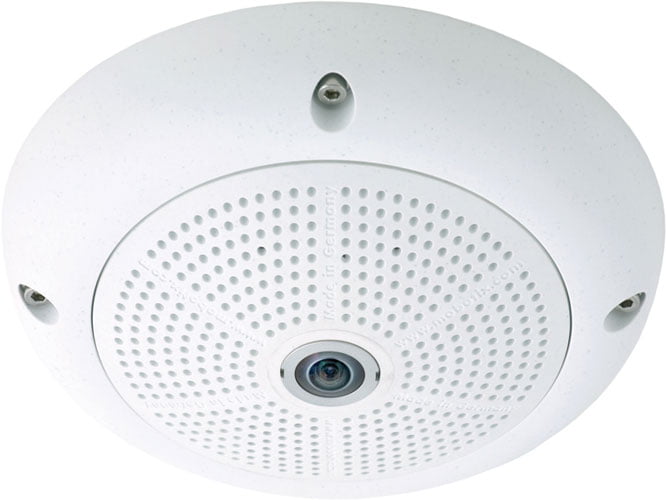 The PoE IP65-rated Q24 from Mobotix is the original IP-based hemispheric camera. It’s key components include a hemispheric camera comprising a fisheye lens, an image sensor and integrated image correction software.
The Q24, like other hemispherics, is designed to be ceiling mounting (though it can be wall mounted using a special bracket) and if located in the centre of the room it gives a 360-degree of the entire room. I’ve seen the Q24 in a number of applications and its performance is excellent. The camera is more than capable in areas with a 20m diameter from the camera point – that’s a very large hall or foyer.
Same as all hemispherics, the fisheye gives a convex image but this is corrected by the integrated distortion correction software, so the scene actually appears very true to the eye. Something that’s very nice about the Mobotix camera and management software is that it allows users to view several image sections at once. These image sections can be recorded separately, as well as being monitored separately.
The Q24 has a ½-inch CMOS progressive scan chip whose specifications include minimum scene illumination of 1 lux in colour and 0.1 lux in monochrome. Maximum image resolution is 2048 x 1536 (3MP) in colour and 1280 x 960 in monochrome.
Images format selections include 160 x 120 pixels to 2048 x 1536 pixels with an L11 lens. There’s also PTZ view, quad view, panorama broad view image, double panoramic view, and a panorama focus with 3 views.
Image compression is MxPEG, M-JPEG, JPG, H.264 (Video-VoIP-Telephony) and maximum frame rates in MxPEG VGA is 30 fps, 1MP is 30 fps and 3MP is 20 fps.
Other features include internal DVR MicroSD slot (camera internal video recording up to 64 GB), external storage directly on NAS and PC/Server without additional recording software. VMS is MxEasy for remote management while control room software is MxControlCenter 2.1
Image processing capabilities include backlight compensation, automatic white balance, image distortion correction (panoramic image correction included), video sensor (motion detection). There’s a virtual PTZ with digital PTZ and a continuous 8x zoom.
There’s triggering of events by integrated multiple-window motion detection, external signal, temperature sensor, notification over email, FTP, IP-Telephony (VoIP, SIP), visual/acoustic alarm Pre- and post-alarm images.
I can’t jump away from Mobotix hemispheric cameras without mentioning the S14, which combines the P3 camera board with a pair of hemispheric cameras on 2m cables to increase the flexibility of installations. 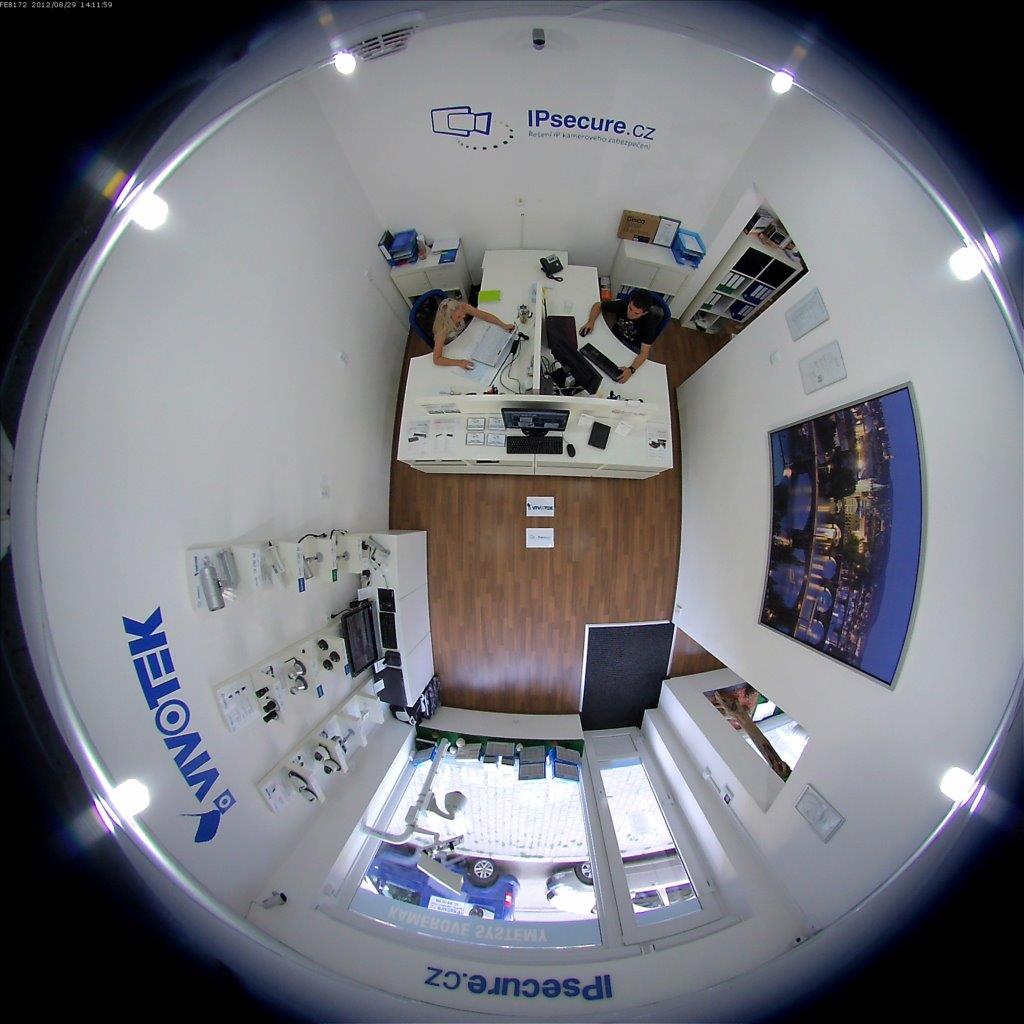 The VIVOTEK FE8172 offers various display layouts, including original surround view, panoramic view, and regional view for various mounting applications. There are strong image processing capabilities that allow hemispherical images captured from the fisheye camera can be converted into conventional rectilinear projection for viewing and analysis.
In both the panoramic as well as regional viewing modes, users can utilize the ePTZ function to zoom in and focus on a region of interest (ROI). The new pixel calculator function helps the user to ensure the image quality of a desired area.
Features of the Vivotek FE8172 include up to 30 fps at 1080p Full HD with the 1.05 mm fisheye lens giving 180-degree panoramic view and 360-degree surround view. There’s a removable IR-cut filter for day/night function
There’s real-time H.264, MPEG-4 and MJPEG Compression (Triple Codec) and WDR enhancement, built-in 802.3af compliant PoE and an integrated MicroSD/SDHC/SDXC Card Slot for on-board storage.
I’ve seen the FE8172 deployed and was impressed with its performance. For such a small form factor there’s a huge amount of information generated by this camera. Also impressive was Vivotek’s management software which is intuitive, with plenty of display options. 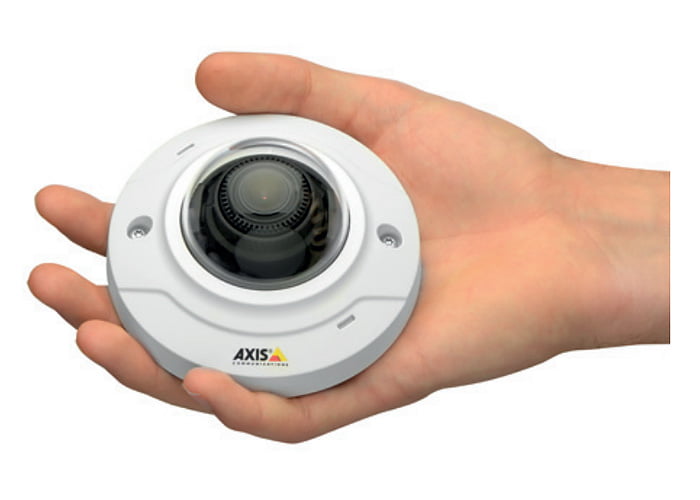 The AXIS M3007-PV PoE network camera is a fixed mini dome with 360-degree and 180-degree panoramic views at up to 5MP resolutions. The camera is compact, vandal and dust-resistant design, and can be installed on walls or ceilings. There’s a digital PTZ and multi-view streaming with de-warped views, along with edge storage with support for micro-SDHC cards.
According to Axis the camera offers useful panoramic views of areas as large as 650 square metres – that’s about the size of a large hall or hotel foyer. AXIS M3007-PV offers different views – including a 360-degree overview and de-warped views such as panorama, double panorama and quad views. The quad view is ideal when the camera is positioned at an intersection of corridors.
The camera also provides 4 individually cropped out and dewarped view areas where users can digitally pan, tilt and zoom in on areas of interest. Multiple video streams in H.264 and Motion JPEG can be sent simultaneously.
The AXIS M3007-PV offers video motion detection and active tampering alarm. In the 360-degree overview mode, the camera also supports the installation of intelligent video applications, such as people counting and heat mapping. 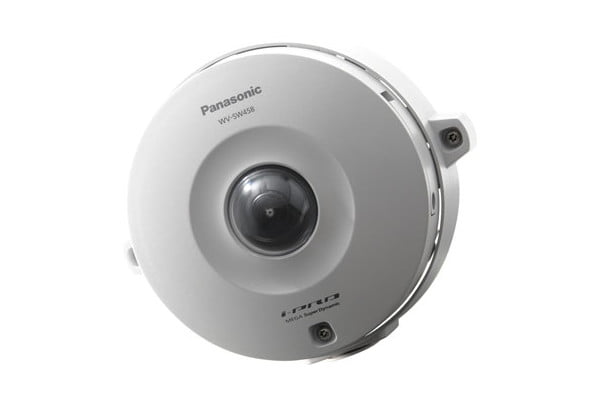 The new kids on the hemispheric block, Panasonic’s panoramic cameras are built around the company’s i-Pro SmartHD technology. The models are the indoor camera WV-SF438E and the outdoor WV-SW458E, which features a dehumidification device to prevent fogging, in an IP66-rated weather resistant dome. Meanwhile, the WV-SW458M is designed specifically for transport applications such as buses or trains.
These cameras use high profile H.264 compression to keep bandwidth requirements low and have Super Dynamic technology for difficult, wide dynamic lighting conditions. Their 3MP/1080P resolutions can be used for a multitude of views including, fisheye view, double panorama which is two 180-degree horizontal views one upon the other, quad views, and many more.
Pan Tilt Zoom operation is possible including preset positions and auto panning, all without any mechanical movement.  Full duplex audio is built into the camera; SD/SDHC/SDXC card slot for recording in the camera, and all images are compensated for distortion by the camera.
To reduce the bandwidth further, the cameras use VIQS (Variable Image Quality on Specified area). It allows the installer to draw a box around a low priority area of the picture then the bit rate within the box is reduced, reducing overall bandwidth.
Installation is easy using PoE or 12vdc to power the camera and is compatible with the Panasonic Network Recorder WJ-NV200 for quick easy setup. Neat features include Face Detection, Video Motion Detection, and Privacy Zones are also incorporated in the cameras, ensuring optional performance.
I’ve seen these cameras in operation and their performance is extremely good, just as you’d expect, with excellent colour rendition and strong WDR capability.
Linkedin
Facebook
Twitter
Email
Copy URL
Print
Previous article
Ingersoll Rands US2 Billion Security Products Spinoff: Allegion
Next article
Tyco to Acquire Exacq Technologies for US150M