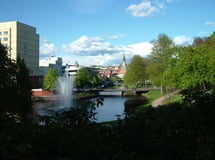 WITH 210,000 consultations and 185,000 treatments per year, almost 4,000 employees in 200,000 square meters of buildings, and 33,000 inpatient admissions per year, there is high activity on many levels around the clock at Sodra Alvsborg’s hospital in Boras, Sweden. Security is a critical parameter to ensure that daily processes run as effectively and problem-free as possible for both the staff and the patients. The hospital’s safety measures include a security system based on Milestone XProtect IP video surveillance software, installed by integrator, Niscayah. Security Manager Jan-Ola Hoglund believes that security in a hospital basically has to do with people and human nature.”Just last year alone, clinical personnel activated 536 assault alarms concerning angry patients and people who were under the influence of alcohol or drugs. These are the kinds of cases where we come in as security staff and really appreciate having the video surveillance, which we also use as documentation material for the police,” says Hoglund.Previously, the hospital used analog video monitoring equipment but along with new developments they have replaced most of that with surveillance managed by digital IP network video management software from Milestone Systems. In cooperation with Niscayah, the hospital contacted Milestone in 2004 to learn more about the company’s market-leading video platform, and installed it with 34 cameras shortly thereafter – a number that increased to 94 by the summer of 2010. The cameras represent a mix of leading manufacturers – Axis, Bosch and Panasonic. The surveillance solution at this hospital uses Milestone’s XProtect Enterprise IP video management software, which can be installed with servers spread out over multiple locations for operating hundreds of cameras. The system includes existing analog cameras that are connected to the network via video encoders, and new IP megapixel cameras. The cameras are set up in the emergency room, at every entrance, in outdoor areas and parking places, and in the underground corridors that connect the hospital’s different wards.”The Milestone platform is ideal for the hospital in Boras because the personnel often need to document incidents that occur with the hundreds of patients who daily come and go from the premises. The video images are of very high quality, which makes it possible for the police to use them as evidence material, if the need occurs,” says Kjell Andersson from integrator, Niscayah.In the year 2000 alone, before the hospital installed video surveillance, 64 incidents were reported to the police, whereas in 2005 after video monitoring was implemented, the number fell to just 11. This indicates that surveillance does have a preventive effect. Hoglund and his security colleagues from Securitas are the only ones who have access to the video system, which is checked several times throughout each day.”The hospital has 800 doors with different access card systems. Milestone’s platform makes it possible to see the relevant video from all of them on one screen instead of individually by camera,” explains Hoglund.With Milestone XProtect the security personnel at the hospital in Boras manage the views from different cameras on central computer monitors even though the cameras are located in different places. The entire video system can be managed centrally through simply clicking with a mouse, to go directly to any specific camera view. They can use the highest image frame rates allowed by the cameras or adjust these in the Milestone software to save on network bandwidth.In 2010 the hospital in Boras bought another 10 video cameras and expects to add as many again every year. One reason is a new hospital building going up that will be secured in line with the existing facilities. The security operators also monitor another smaller hospital in the area, along with an ambulance centre. This illustrates how Milestone Systems IP video software is easy to expand and tailor to the hospital’s ongoing needs.Sodra Alvsborg’s hospital in Boras is part of Sweden’s Vastra Gotaland region, which operates 17 hospitals, 121 healthcare centres and 170 public dental care facilities. Region Vastra Gotaland was formed in 1999 by merging Skaraborg, Alvsborg and Bohus county councils and parts of the City of Goteborg. The region is one of the biggest in Sweden with 1.5 million inhabitants in 49 municipalities.

“The hospital has 800 doors with different access card systems. Milestone’s platform makes it possible to see the relevant video from all of them on one screen instead of individually by camera”