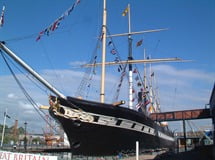 AFTER the historic tea clipper Cutty Sark burned at her Greenwich dry dock in London in 2007, the monitoring of historic vessels by alarm systems, smoke sensors and video surveillance has become vitally important. As well as presenting the pinnacles of maritime technology in their day such vessels are major tourist attractions.Designed by the 19th Century engineer Isambard Kingdom Brunel, the SS Great Britain was an advanced Atlantic liner originally commissioned for the Great Western Steamship Company’s Bristol-New York service.The SS Great Britain was the world’s first iron-hulled screw-driven ocean liner, propelled by a combination of steam and sail power and launched from Bristol in 1843. She criss-crossed the Atlantic, made 32 runs to Australia with emigrants, served as a troop ship in the Crimean war and the Indian Mutiny, and later became a cargo ship. The ship was eventually scuttled in the Falkland Islands in 1937 after 50 years as a storage hulk. It had been a sad end for a great ship. Then came the daring rescue mission in 1970.   ”She was a ship-shaped lump of iron, rust, and scrap,” said Ivor Boyce, one of the tugboat skippers who gently towed her home.  He remembered telling his friends: “What are they going to do with her? No way can they make that into a viable ship anymore.”In 1970, the vessel was returned to the Bristol dry dock where she was first built. Today, the SS Great Britain attracts more than 150,000 visitors annually and is a key part of Britain’s rich maritime history that demands round the clock protection.Installed by Bristol-based Cannon Security, the security system consists of an integrated system of passive infrared Optex Redwall 404 (PIR) detectors, cameras and a live audio speaker warning system installed on and around the vessel, with images that are recorded locally and/or transmitted to a remote monitoring station.The detectors pick up any activity on the shipyard such as attempts to climb on board the ship out-of-hours and generate an alarm. The cameras then transmit images of the incident to a remote video response centre where operators can see what’s happening in real-time and take the appropriate action. “When designing the security system for the SS Great Britain, it became apparent from the nature of the site that the very best type of detectors would be required,” explained Andy Hughes, project manager at Cannon Security. “We have used Optex solutions on several other projects and they raise very few false alarms.”The Super Redwall 404 sensors installed are specifically designed for use in small-to-medium-sized external areas. Standard 404 have a detection area of 40 metres x 4 metres. Rugged construction and reliable operation makes the detectors ideal for use as motion sensors in CCTV applications. The areas of coverage in the Redwall 404 have been designed to match common camera and lens combinations. The inclusion of dual sensors and processors plus high and medium sensitivity settings results in a full specification sensor for the smaller installation. The metal housing of the sensors provides a stable environment for the detection electronics.”Since we installed the Optex Redwall 404 detectors, we have not had to return to site,” says Hughes. “We’re very impressed with them.”According to Nigel Hackett, the sales director for Optex Europe, the SS Great Britain is one of the jewels in the British maritime history.“Protecting it from any damage be it caused by fire or vandals is imperative,” Hackett says. “I’m delighted that Redwall detectors are helping to keep this vital historic ship in pristine condition for future generations to enjoy.”

“When designing the security system for the SS Great Britain, it became apparent from the nature of the site that the very best type of detectors would be required” Andy Hughes, project manager, Cannon Security