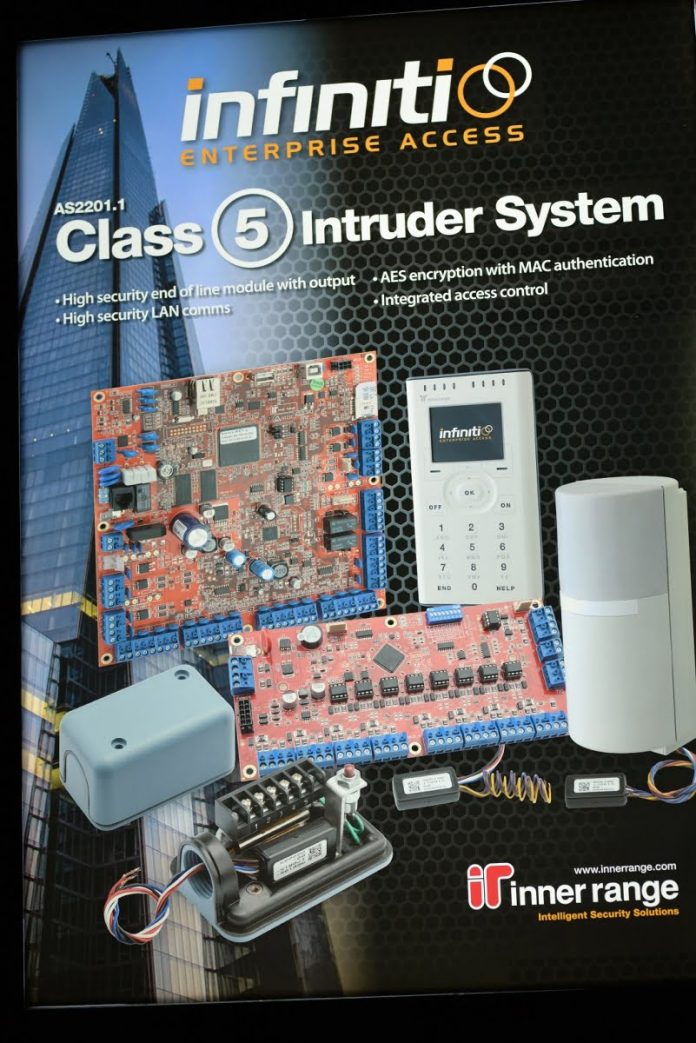 One of the standout developments at Security in Government 2015 was the unveiling of Inner Range’s AS 2201.1 Class 5 platform. Fundamentally, AS2201.1 Class 5 includes encrypted communications from sensor to controller, to keypad. Up until now, government organisations requiring encryption of all parts of security system communications needed to install more costly SCEC Type 1/1A solutions.

“Only a small handful of vendors have products that meet Class 5.  Inner Range is now a highly competitive supplier in this space, it’s big news,” said Inner Range’s Russell Blake. “Taking Class 5 solutions to the high security market is very exciting for us.

“In terms of our product portfolio, we have our ‘Integriti’ commercial security and access control range, ‘Infiniti’ for enterprise access control and ‘Infiniti Class 5’ for high-security applications. Government users and security consultants I have spoken with have said the costs for an installed Type 1A system typically exceed many tens of thousands for just a few security sensors.

“Class 5 gives them almost all the security features of Type 1A but at a much lower cost and may be used in many of the installations where only Type 1A systems have been able to fulfil the site’s requirements in the past.”

The way Inner Range’s Class 5 works is that Inner Range ELM’s (End of Line Modules) are embedded into third party PIR’s, reed switches or other security related input devices. The ELM is wired into such an input device, handles tamper and alarm conditions, and connects via an encrypted RS-485 serial connection to a special Inner Range Class 5 Expander. Bus data and expander to the control module are encrypted to AES-128, as are comms from control module to keypad.

“What this means is that the entire circuit all the way back to the reed switch or PIR is fully encrypted – that’s a fundamental point the AS 2201.1 Class 5 standard requires,” says Blake. “Comparatively, SCEC Type 1A requires similar technical solutions to Class 5, plus a little bit more. Some government agencies and security consultants are saying, “our risk assessment shows that this site can utilise AS2201.1 Class 5 instead of SCEC Type 1A – we will still have our encryption and much more budget to play with.”

The decision on whether an AS2201.1 Class 5 system can be utilised on a particular site is made after the processes in the governments Protective Security Policy Framework (PSPF) have been followed as they must be for each site. It's the PSPF that gives the option of a Class 5 or Type 1/1A solution for a Zone 3 Security Area.

“If the reed switch or PIR goes into alarm the signal is processed and sent out on an encrypted data bus using an ELM to an Inner Range Class 5 Expander,” explains Blake. “Each Expander supports up to 8 security points with each point individually isolated and monitored by a separate RS-485 chip. Instead of simply having supervised input monitoring using resistive states, it’s actually a fully encrypted and authenticated data connection. Communications between peripheral devices (including the Class 5 Expander) and an Infiniti Class 5 control module are likewise encrypted and authenticated.” ♦