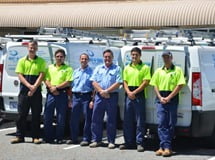 SUPERMARKET applications have very particular challenges. Not only are there multiple fields of view required; including aisles, PoS locations, entries and exits; there are also the challenges posed by towering shelves that block side views, even from oblique angles.
Depth of field is another key issue in retail aisles. Given the typical length of aisles, more than one camera is typically needed if face recognition of shoplifters is the goal. And if fixed cameras are used, there are inevitable blind spots that in the past have been ‘covered’ using smoked domes that create doubt in the minds of would-be criminals at the expense of higher performance in lower light levels.
Other significant challenges relate to the cabling and hardware installation in a brownfield site that has had upgrades and extensions to its fabric. A big store is shaped by the evolution of its building and systems and this has a major impact on the nature of an installation like IGA Willagee. There are also inevitable issues with variable strong light, backlight and with low light after hours.
Shaun Sayers’ Rest-A-Sured Security won the job of sourcing, designing and installing a suitable surveillance solution for the store. It’s another step forward for Rest-A-Sured, which Sayers founded in South Africa back in 1989. After Sayers and his family moved to Perth in 1999, his security company was reborn and, over the past 12 years, Rest-A-Sured has grown from a one-man operation to a thriving integrator, with 3 two-man teams of experienced technicians and administrative staff at an office in Wangara.

“The original reason for installing the system was to deter theft. However, now the system has been installed IGA is also using the camera footage to verify claims of incorrect change given as well as for insurance concerns”

According to Sayers, the process of winning the job was relatively simple and involved an hour-long consultation with IGA, followed by sourcing product and putting together a quote for the work. He says after winning the job, the installation-to-commissioning process took about 4 days.
“First we met the client to ascertain objectives,” Sayer explains. “Then we went back to our office with a site plan to map out what would be a solution to meet the objective. Next, there was a meeting with our supplier to look at what hardware would suit the current layout of the store.
“With the help of Itech Security we planned what we required based on what the owners wanted and Tim Kershaw from iTech assisted in providing a solution. Once we have come to an agreed solution, the quotation is prepared based on that equipment and the cabling and labour components. The quotation is presented to the client and then we move forward with the ordering of the gear.

Central to any surveillance application is establishing exactly what the end user is trying to achieve with their new system and according to Sayers, Rest-A-Sured worked closely with IGA management to ensure its requirements were met.
“The original reason for installing the system was to deter theft,” he explains. “At the time of consultation this was the most prevalent reason. However, now the system has been installed IGA is also using the camera footage to verify claims of incorrect change given as well as for insurance concerns.
“It’s likely that later on IGA will also use the system with video analytics software to establish sales trends in the store and to perhaps use this as marketing data to enable them to present merchandise to customers in the best way.”
While there was a clear motivation for installing the system, IGA was less certain how to meet its goals.
“IGA Willagee’s owners were certain of what they wanted, but not sure how to achieve the end result,” Sayers explains. “We managed the project from that point on, providing a quotation with an indication of where the cameras would be installed as recommended coverage, based on conversations with IGA’s manager, Sonia De Andrade.”
The hardware Rest-A-Sured installed for IGA Willagee is based around HikVision’s 19-inch DS-9016HFI-ST hybrid NVR. The 25ips per channel DS-9016HFI-ST is an H.264 unit with an 80Mbps input rate that offers support for cameras up to 5MP. The unit supports many third-party network cameras, has 8/16-ch 4CIF synchronous playback and compatibility with free HikVision DDNS.
The NVR has 16 BNC inputs and can support a further 16 IP cameras at resolutions of 5 MP, 3MP, 1080P, UXGA, 720P, 4CIF and VGA. There are SATA interfaces for HDDs (4TB per disk), an eSATA interface, 16 audio inputs, dual streams, an HDMI port (1920 x 1080p), 2 USB ports, 16 alarm inputs and 4 alarm outputs. There are also a pair of dual Gigabit RJ45 network ports, as well as a serial interface.
“We installed a hybrid NVR at IGA because that allowed the client to make use of their existing analogue cameras and we then added digital cameras to this NVR,” Sayers explains. “We also upgraded some of the analogue cameras.
“In its entirety, the system consists of a Hybrid NVR that has 16 analogue inputs and 16 Digital inputs, a monitor at the NVR and a PoE Ethernet Switch. Handling vision are iTech MultiCam cameras and iTech Vandal Resistant IR 1.3 Mega Pixel cameras.”
Given these iTech cameras are newly released it’s worth taking a closer look at their specifications, with MultiCAM DS-2CD8464F-E being especially interesting. These are 1.3MP day/night cameras with optional integrated HD video recording (SD card) and dual IRs with a 15m range giving low-light performance of 0.01 lux @ F1.2.
There’s also an integrated PIR for intrusion detection, an embedded alarm device I/O transceiver, a microphone, WiFi connectivity, mobile remote monitoring, email of still images on PIR activation and optional GSM connection allowing integration to networks when network connections are down.
Meanwhile, the DS-2CD7264FWD-E iTech vandal domes are equally well appointed, with up to 1.3 megapixel (1280 x 960) resolutions, standard H.264 video compression with a high compression ratio, and a progressive scan CMOS to capture motion video without an incised margin.
The excellent 120DB Wide Dynamic Range is suitable for strong backlight environments, the cameras support dual stream, and there’s a sub-stream for the mobile phone surveillance. Again, there’s support for 32GB SD/SDHC card local storage, 2-way audio, PoE, auto-iris, electronic shutter, auto focus, heartbeat, PTZ control, an alarm and a reset button.
The vandal domes have a local analogue video output, convenient for adjustment and installation, while 3-axis (pan/tilt/rotation) positioning allows adjustment for optimum camera rotation and position. There’s also IP66 resistance against weather and vandal attacks, making this a very well-optioned camera indeed.

It goes without saying that surveillance is a complex logistical operation when there’s a busy retail environment to deal with. Inevitably, there’s planning involved in getting a system successfully installed with technician’s time on the shop floor limited to quiet periods.
“We contacted the client to fix a start date and to discuss start times during the cabling process,” Sayers explains. “This was usually as early as possible, before the store opened to customers. After we’d agreed on times and dates, we proceeded with the installation of cables and gear.”
According to Sayers, the system itself was relatively easy to install with some support required from iTech’s Kershaw, who visited the site for commissioning to make sure the 4TB NVR’s configuration was done correctly.
“Along with the NVR, we installed 9 iTech MultiCAMS and 4 of the iTech vandal domes,” explains Sayers. “The MultiCAMS were extremely easy to install and set up and they have great picture quality for a 1.3MP camera.”
According to Sayers, the Rest-A-Sured team didn’t work with IGA’s IT people/management but handled the IP side of the install by themselves with support from iTech.
“We installed a completely independent network to the IGA network, however, in the near future, we will be combining the surveillance network with the data network to enable remote access to the cameras,” he says.
As far as the major challenges of the installation, Sayers explains there were some difficult parts to the job.
“There is always a challenge when cabling a store – managing times to work when there are no customers in the store for safety reasons, as well as generally finding the best way to install cables,” he explains. “But other than that the system went in easily for our 2 technicians.”
Given the fundamental differences between the nature of analogue cameras and MP cameras, Sayers points out there were additional considerations relating to parts of the system.
“Megapixel IP cameras are different to analogue cameras in almost every aspect and there are many more considerations when planning a system like this compared with a similar-sized analogue solution,” he says. “Things like network bandwidth, number of digital cameras, frame rates and resolutions all impact on the final results.”
One of the advantages of the new system is that it’s partly future-proof. This is an advantage for IGA, as well as for Rest-A-Sured, which will maintain the system in the future.
“Nothing today is really completely future proof, thanks to the speed of change in technology,” Sayers says. “However, to some extent the new hybrid IP surveillance system at IGA is future proof. Existing analogue cameras can be removed and upgraded to digital cameras without changing the core hardware or software. And digital cameras can be upgraded with no structural changes at all.”
How supportive was the iTech team?
“Tim and team at iTech were extremely supportive as always,” Sayers says. “They prepared the equipment in a pre-commissioned state to allow easy installation once on site and then attended the site to assist with the final commissioning. As an installer, you can’t get better service than that.”

“In its entirety, the system consists of a Hybrid NVR that has 16 analogue inputs and 16 Digital inputs, a monitor at the NVR and a PoE Ethernet Switch. Handling vision are iTech MultiCam cameras and iTech Vandal Resistant IR 1.3 Mega Pixel cameras”