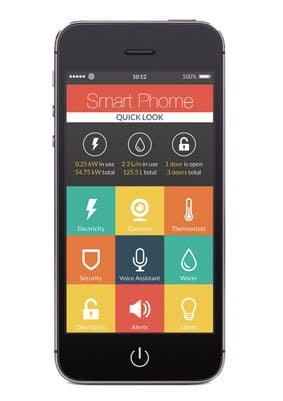 If anything is going to shape the nature of the alarm monitoring industry in years to come it will be the way people interact with information. It’s a seismic shift the industry still doesn’t seem to be entirely on top of.

YOU don’t have to walk far around Sydney’s streets to realise that every second person is walking online. Because I trudge through the CBD to work and because I find the practise of walking online deeply infuriating, I’m well positioned to have noticed this trend. It’s impossible to view such behaviour, in which humans seem to have internalised their latest-gen smart devices, without wondering about its impact on the way people would like to use broader technology.

In a fundamental way people still interact with representations of separate physical interfaces, they are simply bound up in a single always-connected multi-media device. And it’s this ability to remotely access avatars of physical interfaces in real time that’s so appealing.

People genuinely exploit this convenience, whether it’s using a virtual ATM, visiting a virtual store, thumbing through a virtual music collection, photo album, or database. And the same power of convenience, of instantaneous knowing, points people towards virtual controllers for their alarm/CCTV systems at home. Same as everyone else, there are times I would really like to look at the inside of my home from wherever in the world I happen to be and make sure everything is fine.

Given the increasing connectedness of people – and it’s so intense Google recently announced the Internet’s pervasiveness meant it would soon become invisible – it’s impossible to understand why the interfaces of domestic security management solutions remain stubbornly in a state of yester-tech. To my mind the danger is that by failing to offer the experience users expect with every other piece of information technology in their lives, we’ll drive them away from traditional electronic security solutions completely.

Something that grates for users if studies like the Lowe Report are anything to go by, relates to increasing expectations of a particularly high standard of technological capability that does not come at additional expense. When they pay for an internet service, users want to be able to leverage that for everything to do with comms in their lives. They don’t respond well to be additional charges unless they clearly understand where the advantages lie.

It’s this that seems to be encouraging the growth of DIY home security and automation solutions and it's partly a social trend. Today, people comprehend communications, they are on and off multiple devices all day long. They have remote management of banking, shopping, entertainment and interaction with friends. And they want to be able to use the indubitable power of existing smart devices to manage traditional technologies.

Exactly how the alarm industry is going to respond to its customers’ extreme connectedness still remains to be seen, in my opinion. Some players in the market are all over mobile apps while others are much slower on the uptake. And some manufacturers who have a handle on the technology aren't getting the price right. Given the length of time we are spending at this fulcrum point, it’s impossible not to feel that an Apple or a Google could create a game-changing piece of the technology in this space – a multi-comms controller offering endless connectedness and flexibility, as well as very secure comms. A controller supporting any input or output device capable of connecting via open comms standards.

A key aspect of the discussion lies in recognising that there’s an enormous opportunity in finding a balance between 'open' security and home automation solutions that contrive to remain secure in the public domain and can still be supported by professional monitoring services. In my opinion, the advent of such solutions is likely to throw communications providers, monitoring stations and installers into competition in some parts of the market.

Important to bear in mind, there’s growth in home automation. The market is expanding at a compound rate of 26.3 per cent each year on its way to a projected $US21 billion by 2020. Further, the life safety and security segment has the biggest slice of this and is expected to maintain its leading position. The wireless system segment of home automation technology held the largest revenue share, accounting for more than 50 per cent of the overall market. With the increase in the number of products equipped with Wi-Fi technology, the demand for wireless technology-enabled home automation solutions is experiencing substantial growth globally. And while North America led the home automation market in 2014 and is expected to continue its dominance through 2020, affinity towards new technology is delivering growth in Asia Pacific.

I think it’s no longer possible to cling to vague observations in relation to alarm monitoring. The shape of the future is becoming increasingly clear. Just as SEN went to press a Grand View report was tabled that projects the global VSaaS market – video surveillance as a service – will be worth $US50 billion by 2020. While it’s tempting to dismiss such a big number as blue sky, 5 years is a long time in technology. But what most interested me about Grand View Report was what it claimed the drivers of the VSaaS are going to be over this period – they were traffic surveillance and you guessed it – intrusion detection.♦