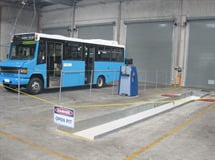 TRANSIT Australia Group is the largest privately owned public transport company in Queensland, Australia. From bus manufacturing through to the delivery of scheduled, school and chartered services, the company delivers transport products and services to the government, the industry and various communities of Queensland.
Sunbus is one of the bus production entities owned by Transit Australia Group, carrying residents of Sunshine Coast, Rockhampton, Townsville, Magnetic Island and Cairns. Additional similar organizations under Transit Australia Group oversee other neighbourhoods, such as Gold Coast and Tweed Shire.
Recently Sunbus embarked on a first and foremost surveillance system establishment throughout the facilities. As this is a depot surveillance project, there are various sections on the premise that need to be covered.
After consulting with Kraut Enterprises, VIVOTEK’s integrator partner in Australia, it was decided that the cameras would be placed at the repair centre, the factory, the office building and the entire depot from an aerial view. VIVOTEK IP7361, FD8361, MD7560 and SD7323 were the chosen solutions, all of which were supplied by ADI.
The VIVOTEK IP7361, a 2-Megapixel bullet designed with various outdoor-specific features, such as concealed wiring and tamper detection, was installed at the bus repair and services centre. At the centre, employee safety was the greatest pressing concern, especially were workers test run buses on the brakepit.
According to Andrew Kraut, ICT systems administrator from Kraut Enterprises, the users found the IP7361 particularly impressive. It was affordable, cost-effective and high-performance. Also, with advanced features like multiple streams, ePTZ function, PoE compliance, on-board storage, two-way audio and many more, the IP7361 is an all-in-one, highly versatile monitoring device. As of Q3 2012, VIVOTEK IP7361 will have experienced an upgrade and been replaced with the IP8361, its second-generation model with enhanced features and higher performances.
Inside the factory, Kraut chose the 2-Megapixel, bandwidth-efficient VIVOTEK FD8361 to take on the role of supervising the labourers and the assembly line. Designed for highly professional applications, the FD8361 delivers high image quality. In this particular environment, where fast motion is constantly taking place, the user demands a camera capable of capturing as much detail as possible during work hours. After work hours suspicious behaviour and potential criminal activities are the priority.
The FD8361 is equipped with activity adaptive streaming for dynamic frame rate control, which meets the needs of many industrial end-users. For a camera suitable for the industrial vertical market, it also needs to be easily installed at any corner and spot in the factory for easy viewing of the entire scene from every possible angle. The 3-axis mechanical design makes the device perfect for ceiling or wall mount installation. The FD8361 also comes with a vari-focal lens (3~9 mm), which allows for versatile applications in various types of environments.
The 2-Megapixel VIVOTEK MD7560 was chosen to monitor the traffic in the area of reception and employees or visitors entering and existing the building. It has a compact and unobstrusive design. The device is also vandal-proof and comes with the tamper detection function, perfect for building surveillance.
Providing images of the entire depot, including the parking lot, is a VIVOTEK SD7323 PTZ allowing staff to zoom in on passing and parked vehicles in the yard. It is imperative that the users can clearly see and make out the identification numbers on the vehicles in order to be aware of what vehicles they have available for use on bus routes.
Its 360-degree continuous pan and 90-degree tilt makes the monitoring process smooth and effective. Also, the 2-way audio function allows for instant communications between a vehicle operator and an employee in case of an incident. Designed for demanding outdoor surveillance applications and with IP66-rated housing, the speed dome meets the users’ requirement for being able to identify close-up images of distant objects and withstand challenging weather conditions.
Kraut is extremely pleased with the performances of the VIVOTEK cameras and he says image quality is impeccable and the technologies implemented on the products are highly advanced and suitable for professional projects as such.
“I would definitely recommend VIVOTEK cameras to all other members of the security industry,” Kraut says.
Meanwhile, Stacey Lien, chief regional sales manager for Australia, pointed out that VIVOTEK highly values the Australian market and is investing more in this territory.
“We look forward to working closely with our partners in Australia and continuing to deliver effective solutions to all members of the surveillance industry.”