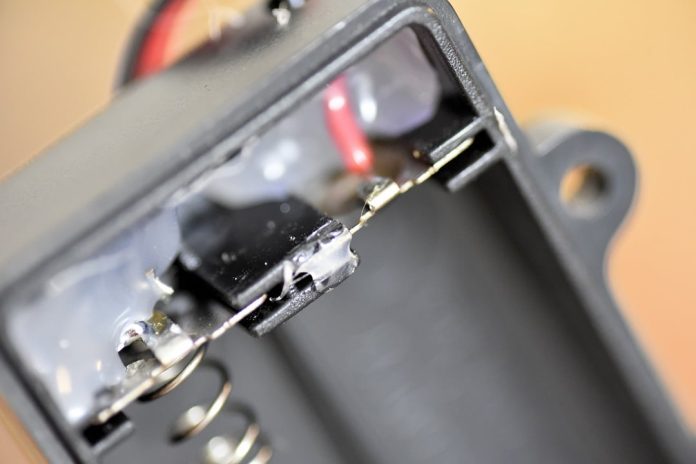 I’ve bought a waterproof battery box to power a movement-activated white LED light to support a camera installed in an entry way. It’s a short-term fix as the end user has a major upgrade in the works.

The issue is that the potted terminations aren’t entirely covered – the potting is just a couple of blobs on either side with wires and termination stumps exposed. What can I use to cover them completely? Will clear silicon do the job or do I need to use industrial grade potting compound?

A: This looks like sample variation caused by zero quality control on the production line and we’d suggest you return the item and ask for a replacement. If that’s not worth the effort for such a low-cost item, then there are a couple of options.

Potting compounds are often epoxy resin-based (hard) or polyurethane (rubbery) and they’re designed to keep terminations attached to termination posts in the presence of vibration, as well as protecting them from corrosion-causing moisture. Something epoxy potting offers is flame resistance, which might be important for some designs and not for others.

Neutral cure silicon can also be used to protect terminations and there’s a strong argument that the latest silicon products are a better potting compound and easier to use than epoxy.

If you need to meet fire regs, then ER2188RP50G is a readily available epoxy resin with flame retardancy, for general purpose, 2-part potting and encapsulation. It uses a hardener free of DDM or other aromatic amines.

The flame-retardant technology used is a clean type leading to relatively low toxicity fumes and low smoke emission. As well as excellent electrical properties it’s rated UL94V-0 for flammability and is RoHS-2 compliant for use of hazardous substances in manufacture. It’s about $A15 for a 50g tube, which looks like it would be plenty.

With silicone we’d be thinking about Oximes but a complexity here is that they don’t bond to polycarbonate, so whether they will bond to whatever compound the manufacturer of your battery box hasn’t used properly is an issue you’ll need to assess in real time. Silicone doesn’t form a complete barrier against water vapour, either.

Something unrelated to your custom light job is that when the white LED comes on, the camera is going to shift from day to night mode unless you lock it in colour. This might not be an issue if the camera D/N shift is quick but it’s something to walk test to ensure camera processes such as moving the cut filter and winding focus in and out don’t mess up video coverage of very short events after dark.