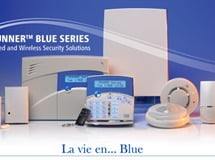 WIRELESS panels
have for too long been undervalued by tech teams despite their advantages of
fast and flexible installation. The fact is there are applications where
hardwired systems simply can’t provide security and this latest generation of
wireless solution is superior to anything available before.

All the major
alarm manufacturers offer installers plenty of bang for their buck and while
wireless is about 40 per cent more expensive than hardwired out of the box,
there are some excellent deals on kits from all the major manufacturers and
wholesalers.

According to
Ness’ Peter Mohan, the Australian manufacturer’s flagship wireless alarm panel
is the Ness R16 16-zone wireless panel. The R16 is a tidy unit that traces much
its functionality back to the revolutionary Ness 5000 panel.

“The R16 supports
up to 16 Ness radio devices as well as an additional 15 Ness Radio Keys,” Mohan
explains. “All Ness supervised and encrypted radio devices are supported. There
is even a Doorbell feature with selectable tunes when used with the Ness Radio
Doorbell transmitter.

“In addition to
radio devices, the R16 has 1 hardwired input which operates on zone 16 and 1
hardwired tamper input,” he says. “The built-in piezo siren provides high
volume audible warning. The R16 also has Siren, Piezo and Strobe outputs for
additional hardwired noisemakers.”

The built-in
dialler uses Contact ID format for central station monitoring as well as audible
monitoring to any telephone. The user can also dial into the system for remote
arming and disarming over the telephone line.

According to
Mohan, the Ness R16 has been designed and built to the exacting standards
demanded by Ness’ commitment to quality and excellence in manufacturing in
Australia.

“The
differentiator with the R16 and all Ness products over the competition is that
they are all 100 per cent Australian made by Ness at the company’s head office
in Sydney,” Mohan says.

“Ness wireless
alarm systems are extremely reliable and consistently give many years of
uninterrupted service,” he explains. “Ness has made a huge investment
in wireless research and development, in particular concentrating on
extending battery life.

These are
impressive figures indeed. Many installers and their clients wrestle with short
battery life in the field – with 12 months before endless and expensive low
battery signals being machine-gunned to the control room annoyingly common.

Mohan says that
from an installers’ and end users’ perspective, the most important capability
of any wireless alarm panel is speed and ease of installation.

According to
Mohan, Ness’ wireless sensors are based on the company’s quality hardwired
sensors and have proved their reliability over many years.

“There’s also a
wireless Smoke Detector and a Wireless Siren for a wireless link to the
contol panel that only requires local power.”

Mohan says that
in addition to their wireless features, the versatile R8 and R16 control panels
also have a 3-door access controller onboard.

“You can connect
up to three standard weigand readers such as the Ness Ultraprox reader or even
biometrics such as fingerprint readers,” he says.

“Many of
the features of a dedicated access control system are included, such as
reader addressing, REX inputs, programmable outputs and even arming and
disarming of the control panel in addition to door control.”

The Ness M1-Gold when
used as a hybrid wireless system offers even more powerful access control
features. The M1-Gold can even interface at high level with Ness’ IP-Access
Control products for a fully integrated wireless alarm and high-end access
control solution.

Mohan says the
typical cost of a wireless kit to the trade is 40-50 per cent more than a
hardwired system.

“This 8 or 16-zone
system is available in two configurations,” Edwards explains. “The first is the
traditional hardwired remote codepad and sirens combined with wireless
detection devices and the second is a standalone wireless control panel with
onboard keypad utilising wireless detection devices.”

Edwards says
Runner has some distinct differences from the competition.

“This greatly
increases the wireless transmission range of the devices because FreeWave
operates on a frequency that is uncluttered,” Edwards explains.

“The Runner
system offers RSSI (Received Signal Strength Indicator) in the form of a signal
strength meter which can be measured when in programming mode, this ensures
that the detection device is located in the best possible area. The wide range
of FreeWave detection devices and transmitters, incorporates all of the possible
security requirements when you are designing a system.”

In terms of
comparative reliability when compared with hardwired alarm solutions, Edwards
rightly concedes experienced technicians agree there’s nothing better than
running a cable to a detection device.

“With hardwire you
are able to indicate alarm, tamper and in some devices, anti-masking,” he
explains. “But FreeWave wireless devices which operate on the uncluttered
915Mhz FM Band, have greater range and less interference than other wireless
technologies.

“Every Crow
wireless device is fully monitored by the Runner for Battery, Tamper, Alarm and
Supervision of Signal and FreeWave wireless devices are as good as their
hardwired cousins’ performance wise but it is the fact that if batteries are
not changed frequently under a regimented maintenance program then fault
conditions are generated, that deters installers.”

According to
Edwards, the key features of any wireless alarm panel are Received Signal
Strength Indicator, Full Supervision, Reliability, Range and Immunity against
interference.

“Also important
is quick and easy installation,” Edwards says. “We have clients who regularly
install our Runner system that can install a three detector fully wireless
system, program it and demonstrate it on site in than less 90 mins.”

“And the system
is competitively priced, too,” says Edwards. “We have a Runner wireless kit
that incorporates of a Runner Plus wireless panel, 2 x FreeWave wireless Pet
Immune Quad PIR’s and 2 x 5 channel remote controls all of which sell to the trade
for $299.00 excluding GST.”

DAS products
manager Paul Knight says that the company’s leading dedicated wireless alarm
panel is the ITI Simon 3 from GE, an alarm panel that has a long history and is
focused tightly offering reliability and simplicity.

“Key features of
Simon 3 include voice prompts for user and installer, ease of use and installation
simplicity,” Knight explains. “Simon 3 has the same range of ITI wireless
sensors that are used on our Reliance panel.

“The whole focus
of Simon is simplicity and ease of use and installation is what the system is
all about,” he says. “As other competitors add more bells and whistles, The
Simon remains focused on its primary role, security.”

“The simplicity
of Simon is reflected in rapid installation times,” Knight says. “Because it’s
wireless the Simon Panel can be located adjacent to Telstra connection and
mains power. Generally a couple of hours is all that’s required for
installation, the a few minutes of

programming and then
commissioning.”

Knight says the
need to maintain batteries remains one of the challenges of all wireless alarm
systems but he says wireless and battery technologies are constantly improving,
offering longer times between battery changes and a better price point.

“In terms of
system operation, the customer has the choice of using the buttons on the front
of the Simon panel, or operating the system using wireless code pads or 2/4
button key fobs can be added.”

“The MG5050 is a hybrid
panel offering both hardwired and 2-way wireless (Magellan technology),”
Hamilton says. “The panel offers a maximum of 32 zones whether they be
hardwired or wireless. Wireless devices can be placed to any of the 32 zones
available in its capacity.”

Hamilton is
adamant the MG5050 is the dominant panel in its segment, offering a feature set
the competitors can’t match.

“With Magellan
2-way wireless Remotes, the panel sends the signal back to your remote given
the user both a distinguishable visual and audible confirmation of the state
the panel is in,” he says. “The panel can tell users if it’s Armed, Disarmed or
set up for Exit Delay or Entry Delay, In Alarm and even PGM activation.

“It gets better –
the user can even pull the remote out of their pocket while at the supermarket
and at the press of a button get the reassurance from the remote displaying the
last action received i.e. Armed,” He explains.

“Wireless keypads
are also impactful with the MG5050,” Hamilton says.

“The integrator
can program from them and they don’t require a hardwired keypad to start out
with. In fact, the Magellan keypad is exactly the same as a hardwired except
the benefit of it being 2-way wireless.”

Other neat
features of the MG5050 include fully supervised wireless repeaters a 5-Amp
relay for the use of gates, the ability to monitor a hardwired zone and a
backup battery.

“There’s also a
wireless programmable output which is again 2-way wireless, which means devices
can be installed into locations where cabling is unachievable, say for
triggering a garage door,” Hamilton says. “In such applications the panel will
send the signal to the PGM and the PGM will send confirmation back to the panel
and then the panel will pass confirmation on to your remote.”

According to
Hamilton, in terms of sensor capabilities the Magellan (wireless) range of sensors
offer both analogue to digital, there’s pet immunity and an ultra small door
contact.

“The strengths of
the MG5050 include menu driven programming, Magellan encrypted 2-way wireless,
2-way remotes even a keypad remote (the REM3) which can be fitted to your set
of keys and provide security even if the keys are lost,” Hamilton says. “The
system is also resisant to RF jamming, offers flash.

“I think from an installer’s
perspective the vital feature of any wireless alarm system is reliability,” he
says. “There is a fear factor to contend with integrators when it comes to
wireless but CSD’s reassurance to integrators comes from experience and
extensive testing that Paradox has carried out in the development of Magellan.

“This panel has
smarts you would not believe – the panel can tell you if something is amiss – if
extreme jamming were to occur, the panel/s would respond with reporting to the
Monitoring station ‘RF Jamming’ and a trouble indication from the keypad.”

Hamilton says
time trials have shown the MG5050 to be exceptionally easy to program.

“We carry out ‘on-site’
scenarios with our training and tech support teams and they’re most
instructive,” he explains. “One scenario we tried was 10 wireless PIRs and 2
wireless door contacts and the elapsed time was 2 minutes 33 seconds including
a user with a remote.

“The record held
by Nathan Van Broek from CSD tech support in WA for StayD demonstration of 10
zones is 2 minutes 5 seconds (that’s programming the 10 zones to suit a medium
sized home with user & remote and StayD mode active).”

As far as
wireless sensor capability, Hamilton says the PMD75 (indoor) is the best in its
range.

“There is also an
outdoor version, the PMD85 and all the digital wireless PIR’s offer installers something
no other detector in the market can – that’s 100 per cent digital detection, no
analogue processing.”

Hamilton says
cost for the MG5050 is sharp with the typical cost of a wireless kit to the
trade starting from $268 excluding GST.