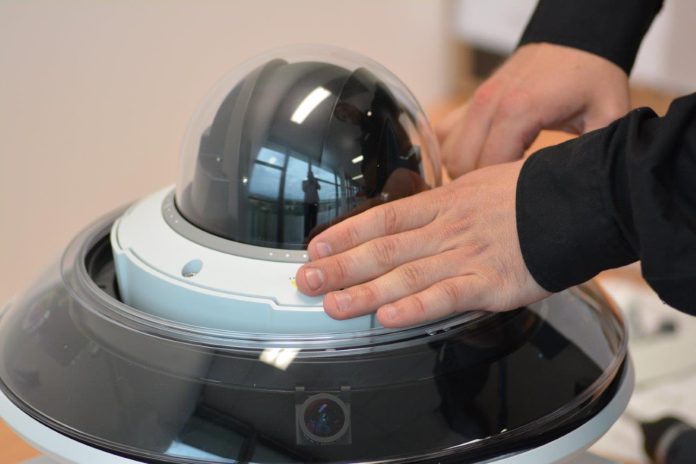 AXIS Communications has released the Axis Q6000-E, a unit that attaches to the Q60-E PTZs to offer a surveillance solution whose simplicity of installation belies its inherent power.

I GOT a look at the Q6000-E at Axis HO in Sydney recently. Running the show was Axis’ John Richardson, who had set the camera up on a pole in the carpark. It was another of those funny days for camera testing. There was plenty of glare and then a storm came through and things got much darker.

Standing underneath the unit looking up, it takes me a while to get my head around what the unit actually does. Richardson has to explain it to me twice. In short, Axis Q6000-E is an outdoor-ready, 360-degree network camera system (it comprises 4 wide angle 1.3mm 2MP cameras in a circular housing), that installs around and seamlessly integrates with the AXIS Q60-E Series of PTZ dome network cameras. 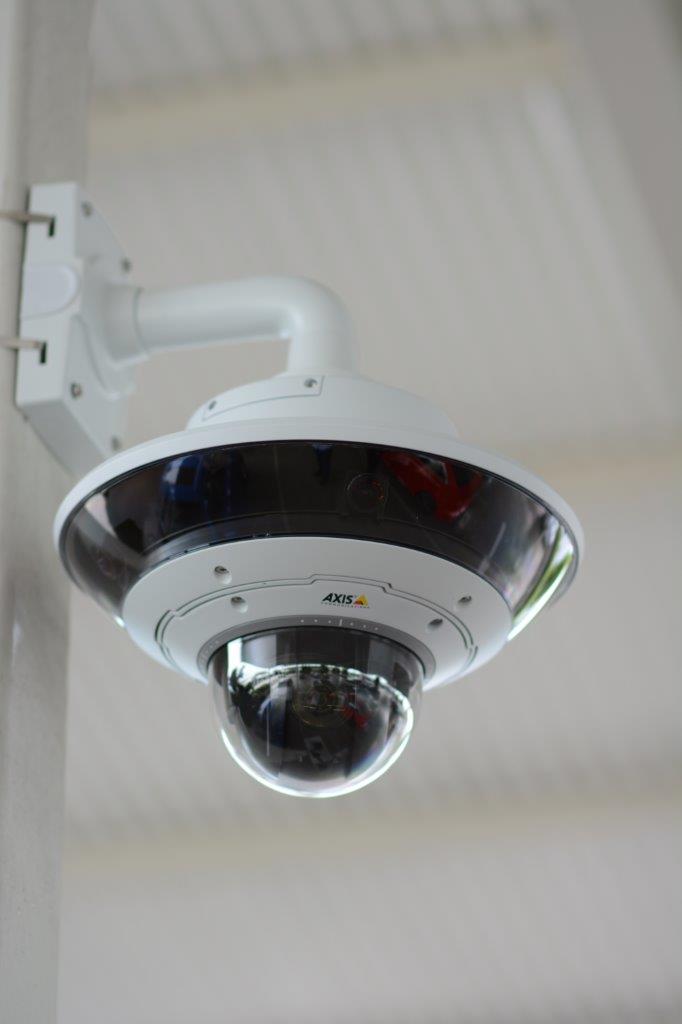 “It’s an easy setup – this single cable goes up to the camera – that’s power, data – you use the existing power supply provided with the Q60-E camera we are working with here. And for an existing customer with one of our PTZs they pull it down, remove the bolts on top, bolt the 6000 on and plug the same cable straight in. The combined unit perfectly fits the existing brackets.”

While this simplicity of installation is attractive, it’s the functionality of the combined solution that’s the real eye-opener.

“What the Q6000-E allows is a real time (25ips), quad split image at a fixed focal length allowing situational awareness no matter where the PTZ is focused,” says Richardson.

“There are 4 cameras in the Q6000-E unit, each is 2MP and they output 720p at 25ips. The Q6000-E cameras are fixed but they are installed on a rail with magnetic detents, so you can move them to improve your view or cover another area more effectively if the unit is mounted on a pole that masks out a particular part of the scene.”

According to Richardson, all Axis Q6045 cameras will be upgraded to a MkII version shortly, which gives them a 32x zoom lens. This new lens is wider and more telephoto and the low light sensitivity is double what it was. It’s a change that will make incorporation of the Q6000-E more powerful still. 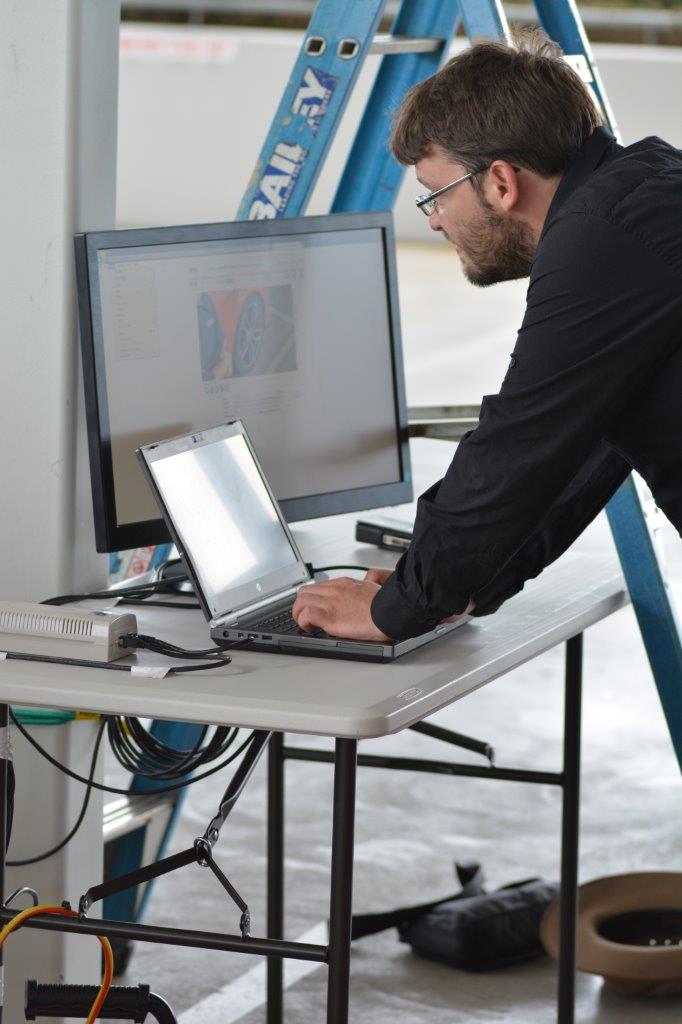 John Richardson at the controls

While I’m mucking around taking photos of the camera, Richardson is working away at the demo workstation he’s setup in the undercover carpark at Axis. When I finish up, we get right into taking a look at how the system works. It’s all deceptively simple.

“What the Q6000-E allows is a real time (25ips), quad split image at a fixed focal length allowing situational awareness no matter where the PTZ is focused”

Operationally, the unit is managed with 2 screens that give a full 360-degree overview from the Axis Q6000-E, and a zoomed-in view from Axis Q60-E. Important too, the Axis Q6000-E provides multiple, configurable video streams in H.264 and MJPEG to optimize bandwidth, storage and image quality. This combination of 4 wide angle fixed cameras and one quality PTZ gives constant 360-degree recording and surveillance, while also allowing one click zoom to an object of interest anywhere in the 360-degree scene.

The solution Richardson has built is driving on a mature age HP Elitebook and the 5 separate cameras, 4 fixed and 1 PTZ, are supporting by a single 100Mbps link. Rather than using Axis Camera Station software we are viewing the image streams on the pair of monitors on the table through the local Web Browser hooked directly to the camera. 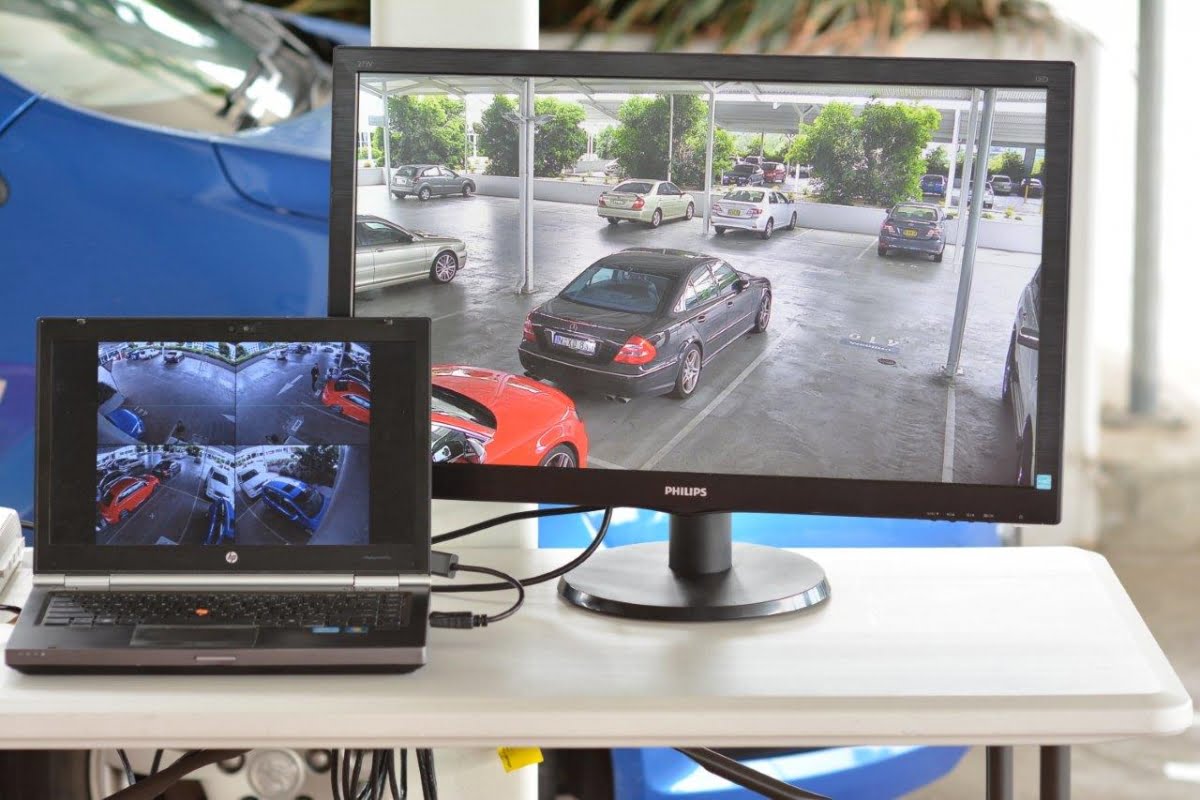 Demo workstation in the carpark

I stand there looking at the full 360-degree image shown on one monitor in a synchronised quad screen, while Richardson demonstrates the way the one-click PTZ works.

“When viewing footage on the quad split image, if you click a mouse onto the live view, the PTZ will pan and tilt to that part of the scene so operators can continue their viewing with great control,” Richardson explains, clicking. With each click on the 360-degree view, the PTZ steps instantly to a new view in which full PTZ functions are immediately to hand.

“And at the same time, even though the operator is moving the PTZ, the 360-degree overview provided by the 4 fixed cameras – continue to be available for viewing and recording,” Richardson says. “As well as viewing events through the PTZ monitor screen, we can also call up the images from the quad stream as full frame. Natively they run in 4×3 resolution or they can run in 720p mode.” 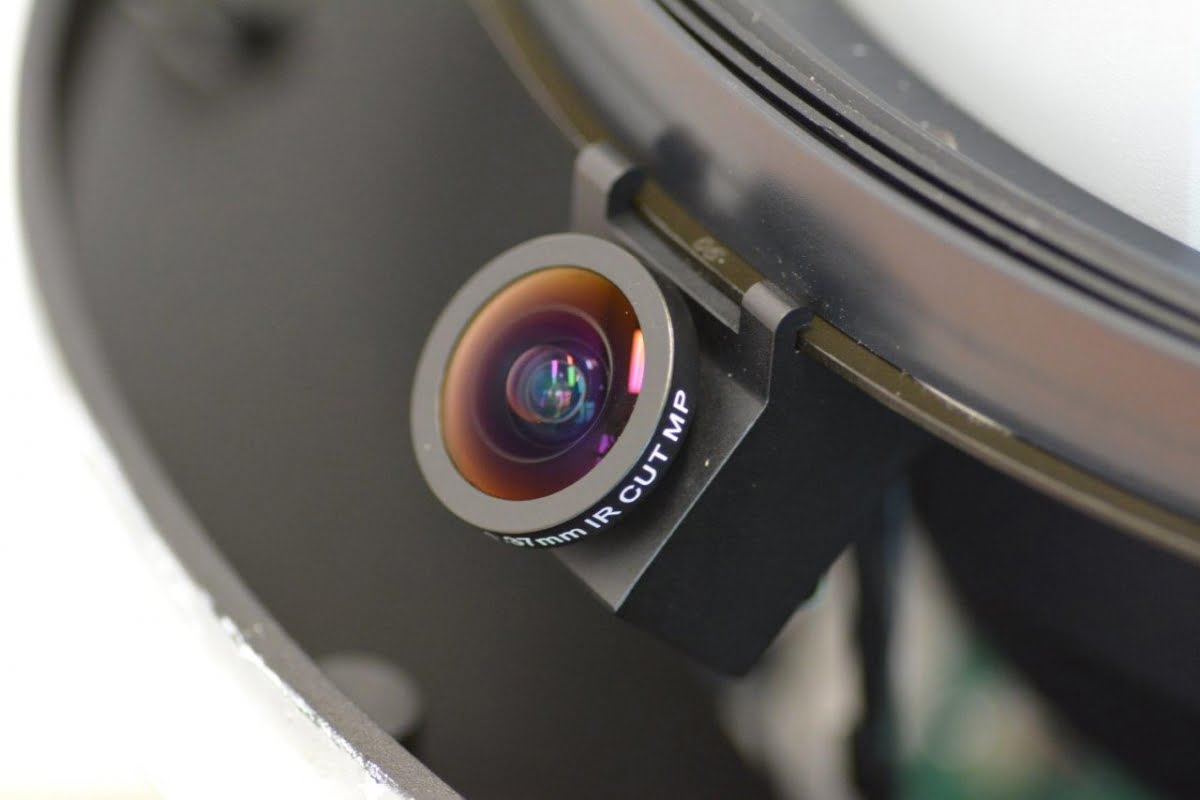 What Richardson is doing is completely seamless. We have full coverage (minus the few degree of the mounting pole) for viewing and recording and we have the ability to zoom and pan using what must surely be one of the CCTV industry’s most capable PTZs.

“Something else to note is that the software allows you to calibrate the position of the Q6000-E cameras relative to the PTZ,” Richardson says. “The PTZ and all the cameras around the Q6000-E ring will run at 25 ips, including all 4 around the Q6000 ring. When it comes to the Q6000-E quad-stream like this, it’s the equivalent of a 3MP image. With the Q60-E PTZ bandwidth is adjustable – you set frame rate and bit rate to match your target bandwidth.

“When it comes to managing the image stream, we can go a step further than just clicking on part of the scene when something of interest occurs, we can also draw a box around an area we want to pay attention to and the PTZ will zoom to that box. If I move the PTZ, you can see the box is updated every second no matter where I am looking.”

Those images from the 4 Q6000-E cameras look surprising good, I point out.

“Our engineers found during development of the Q6000-E that we get better depth of field and much better coverage using 4 cameras than trying to use one fisheye lens. Using 4 moderately wide angle lenses is much better. If you look at the screen you can see we have sharp focus from up close all the way into the background.” 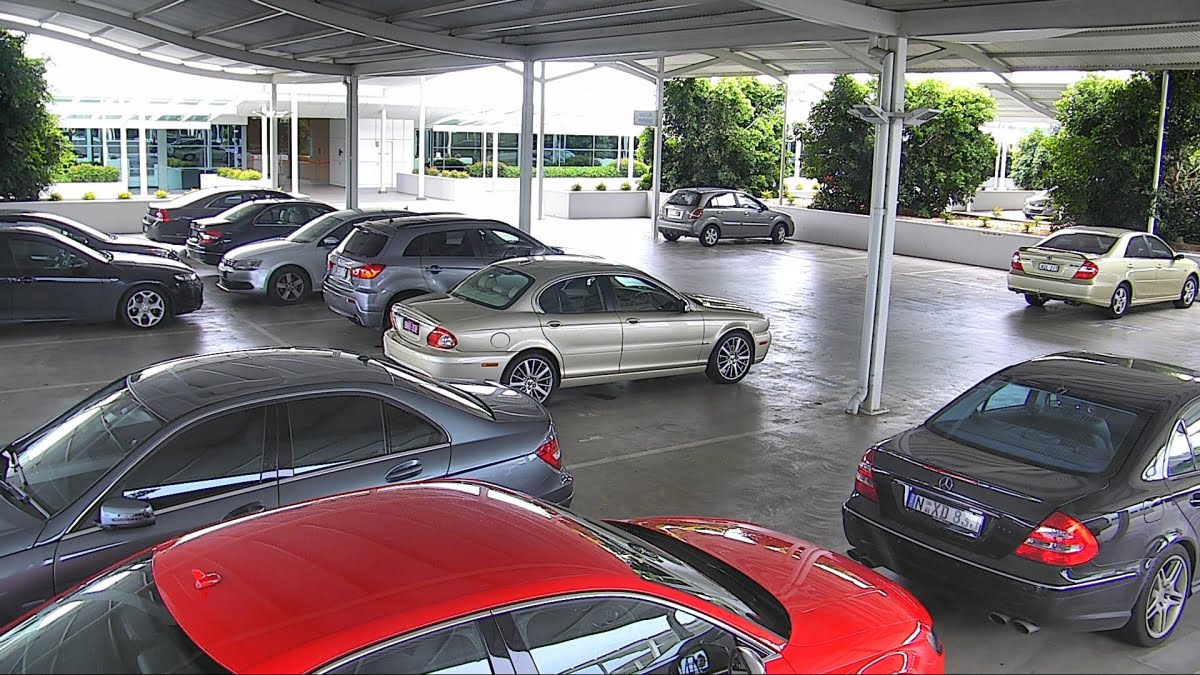 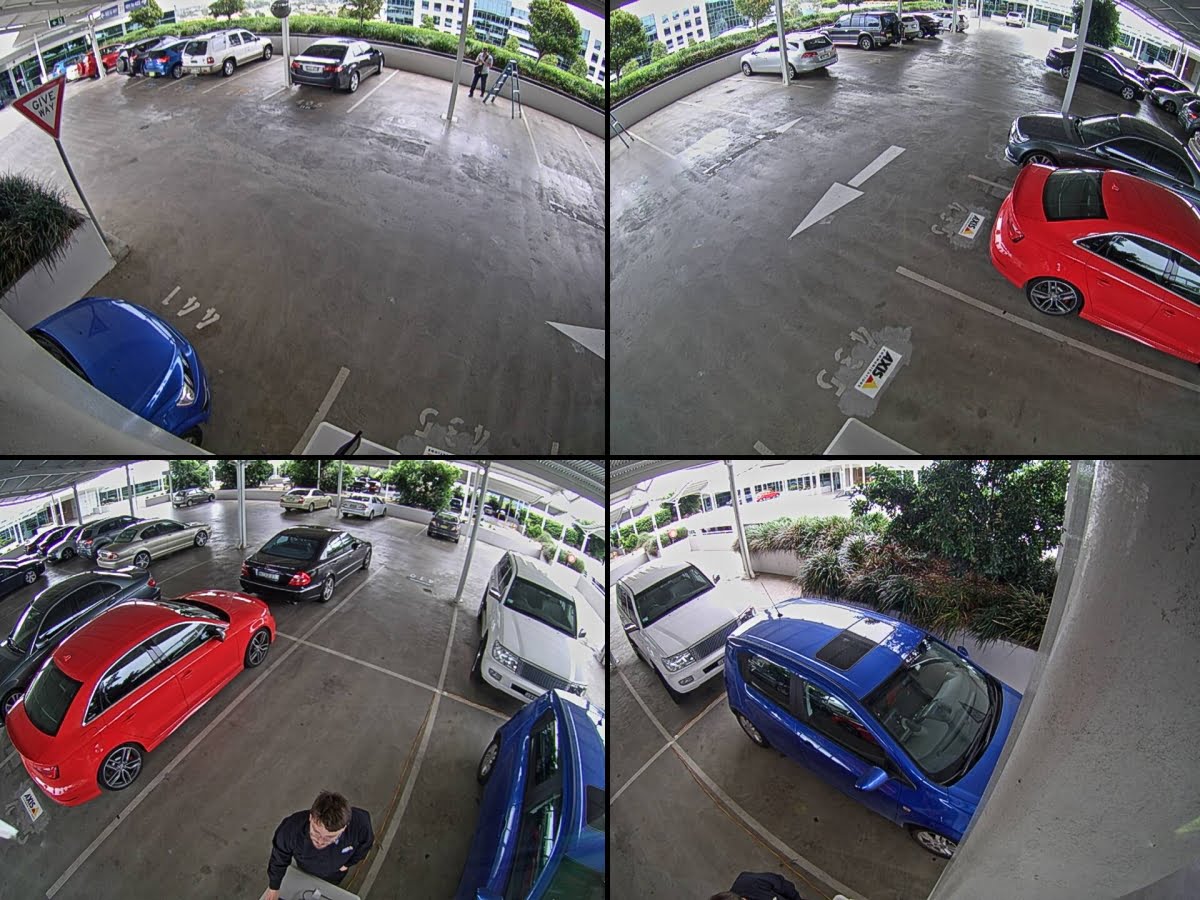 Top: A beautiful image from the Axis Q60-E PTZ and underneath, a 4-split showing the constant wide angle views from the Q6000-E

I look at the screen and yes, Richardson is perfectly right. There’s no doubt whatever that 4 fixed 1.3mm wide angle lenses like these offer vastly superior imaging to any panomorphic lens type. With fish eye lenses, the greater the depth of field, the greater the visible distortion. There’s certainly edge distortion in these images but it’s not excessive and inevitable in any wide angle lens.

And all the while we are looking at the monitors I can’t stop noticing and re-noticing the beautiful image quality of the Axis Q60-E PTZ. It’s a lovely image, with great colour rendition, contrast, general acuity and depth of field.  This camera has a collection of features that make it the perfect team mate for the Q6000-E. It’s a big outdoor PTZ running 1080p and offering 32x zoom. These cameras are vandal resistant to IK10 and have shock detection, surge protection to railway standard.

There’s also IP66 and NEMA 4X protection against dust, rain and snow, and an operating range from -50 to 50C with an Arctic Temperature Control Function. There’s an electronic image stabiliser, auto de-fog, auto-tracking and Active gatekeeper, a built in memory card slot, PoE plus, 256 preset positions, tilt to 20-degrees above the horizon, and colour at half a lux at an aperture of F1.4. But none of the dry specification capture the way in which the image quality of the Q60-E impressed me.

“That PTZ has a really nice image, doesn’t it,” I say to Richardson for the fourth time. “It’s just excellent, considering the funny light, too. The field of view is good and we are getting deep into that scene without using zoom.”

“Yes it is a great image,” he says. “That camera used to be a 20x zoom but now it’s 32x and it’s not just got longer range in tele, it’s also go a new shorter focal length lens so you get a wider image as well – the lens starts out wider and zooms in further.”

Next, Richardson takes the Q60000-E and its host Q60-E off the pole and we head into the office to take a look at the process of attachment. Watching the combined unit being removed from the bracket you can clearly see the thought that has gone into making it work in the simplest possible way. There really is only a single cable and a couple of bolts and when I get a feel of the combined system in my hands as Richardson passes it to me from the ladder, it’s not too heavy or unwieldy to manage.

Richardson gets busy with his drill whizzing out the handful of bolts that hold the Q6000-E to the camera. It really is a simple business. Once these bolts are moved the 2 parts come apart without further ado. 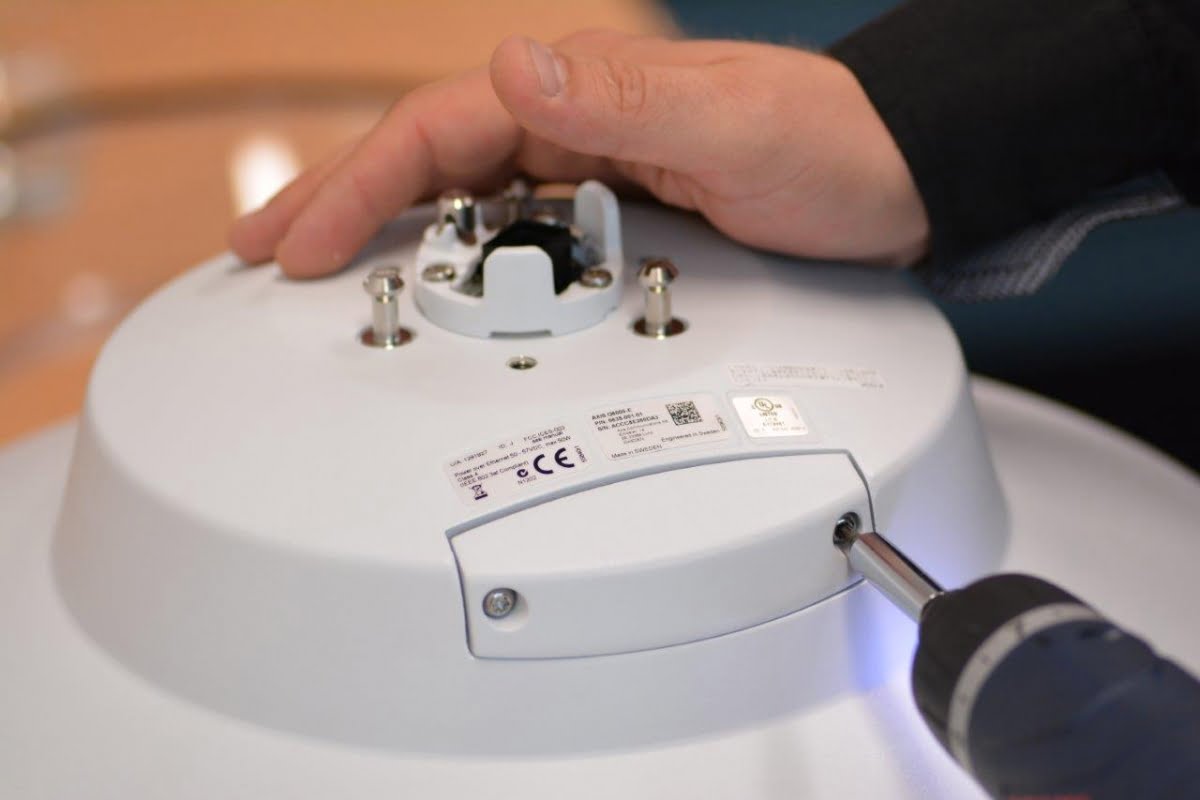 “It’s about a 15 minute process to retrofit the PTZ with the Q6000 unit on the bench and another 10 minutes to calibrate the 4 sensors relative to the PTZ once it’s been mounted on the pole or pendant,” Richardson explains.

“In terms of time and complexity, it’s not a big deal. These are the bits I had to remove,” he says, showing me a small group of bolts in the palm of his hand. “It’s all quite straightforward. Now, let’s have a look inside the unit. 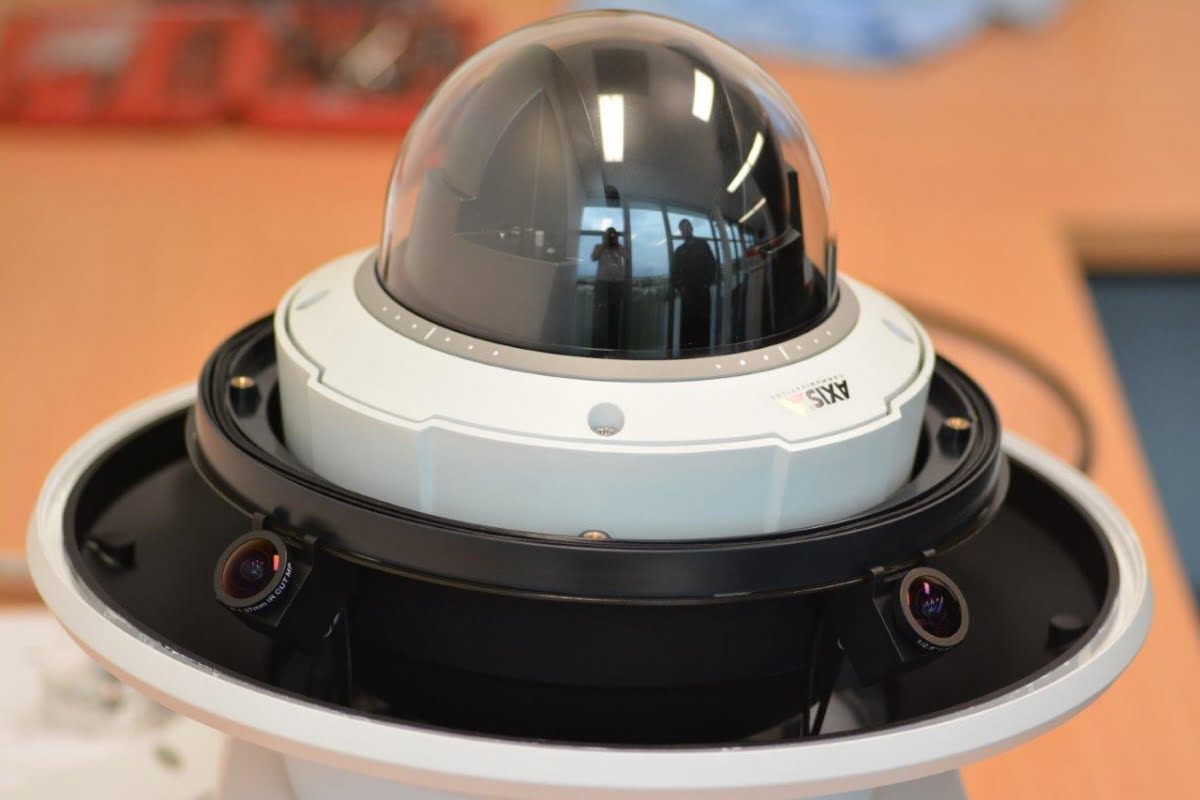 “See how the ring comes off cleanly and look at how it’s all weather-sealed. The home position of the cameras is marked around the ring, which makes life easier for installers. And when you power it up there’s a selectable screen displaying all the cameras so you can perfectly adjust camera positions during commissioning. This Q6000-E is an entirely separate unit with its own processor and applications, so in the future we might see IVA applications using the 4 cameras.” 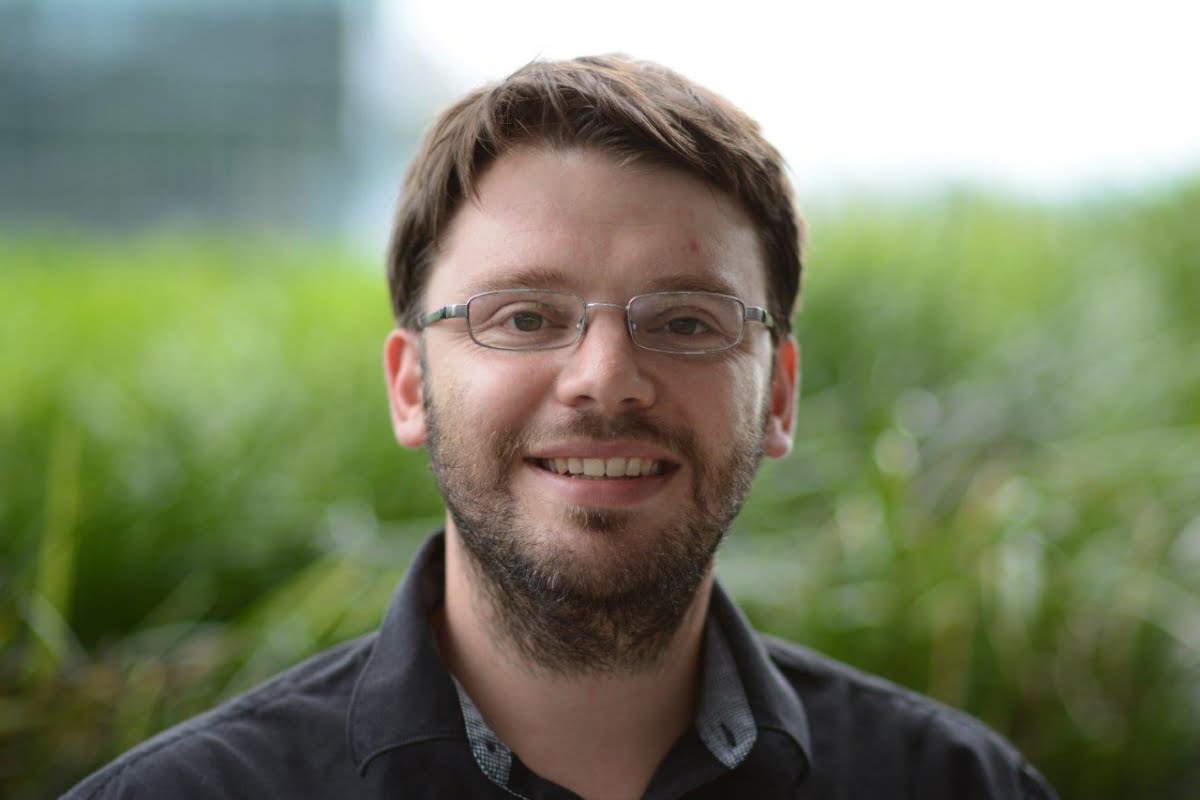 Richardson unscrews the little door on the Q6000-E housing and points out the reset button and SD card slot and shows me where power and data internally pass through in a weather-sealed environment. It’s all very nicely done, indeed.

Later on my impressions of the Q6000-E are materially indivisible from the Q60-E PTZ. Working in combination they offer new customers and current users of the Axis Q60-E PTZ entirely new capabilities. While each is noteworthy in its own way, considered together they are 2 halves of an extremely powerful new system, the perfect example of a whole much greater than the sum of its parts.♦