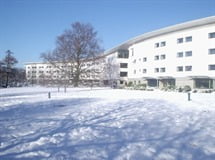 The University of East Anglia (UEA) has over 15,000 students based at its 320-acre campus, situated two miles east of Norwich. Founded in 1960, the university is home to the prestigious Sainsbury Centre for Visual Arts. Following the arrival of a new Campus services manager, Mike McCormack, the university embraced a strategy of bringing its disparate CCTV systems together onto a more comprehensive, up-to-date and future-proof IP-Surveillance network.
UEA invited Axis partner Check Your Security (CYS) to assess the university’s existing surveillance infrastructure and investigate upgrade options. CYS installed AXIS 232D+ and AXIS 233D Dome Network Cameras to provide more comprehensive surveillance in ‘The Street’ where the campus’ shops and bank is located; and ‘The Square’ which is the university’s main external meeting place. The AXIS 233D’s 35x optical zoom also proved ideal for monitoring the large open spaces between the outlying dormitories and the main campus buildings.
CYS also deployed AXIS 241Q Video Encoders to digitize output from the university’s 90 existing analogue cameras, while Milestone XProtect Enterprise video management software was used to manage video images. UEA is now committed to using IP-based surveillance throughout the campus and to integrating systems such as building access control and parking lot barrier entry systems. The UEA also plans to add network cameras into the university’s new £35 million International Centre, which has the capacity to house 1,000 additional overseas students.
The University of East Anglia now has an IP-Surveillance system scalable enough to cope with the inevitable campus expansion. The fully centralized system also enables integration with other IP applications such as access control and automatic number plate recognition (ANPR), while future-proofing investment in existing analogue and network video products alike. AXIS 232D+ and AXIS 233D Network Cameras help provide a comprehensive surveillance solution for the university campus.
After an extension project in the 1980s and major expansion over the last ten years, the uni now accommodates more than 14,000 students including 2,500 non-UK students from 100 countries worldwide. It is ranked inside the top three for student satisfaction according to the latest National Student Survey.
Since the late 1980s, a number of standalone CCTV systems had been installed in and around key buildings, principally as a response to rising car crime at that time. As UEA installed new groups of CCTV cameras, they also attached new dedicated monitoring screens to them. This meant that it was impossible for security staff to view all of the screens from a central location. There was also no clear policy on which types of cameras to buy. Each system remained stand-alone, often using differing proprietary standards for communication with cameras.
Interoperability between groups of cameras became a near impossibility. Monitoring jobs such as tracking people moving across the campus from camera to camera became time-consuming and riddled with points of failure.
During the mid-1990s, UEA established a central control room to serve as the connection hub for all of the individual systems. The room was packed full of equipment, including multiplexers, a bank of video recorders and two walls of monitors with a total of 30 screens. Each screen showed the output from four CCTV cameras.
The control room required extensive air conditioning to reduce the heat generated by all this equipment; despite this system, on a hot summer’s day temperatures in the control room could exceed 100 degrees Fahrenheit. When the heat became too much, not only did the security staff find working in the room extremely difficult, but the equipment would start to fail as it overheated.
“Our partner, Check Your Security, understands our vision and keeps inspiring us to think bigger,” explains Michael McCormack.
When McCormack arrived on the scene, he called for a full review of security surveillance requirements campus-wide. The resulting report led UEA to invite security and networking specialist systems installer firm, Check Your Security, to map out a new IP-Surveillance system for the university.
The new system took advantage of the 90 analogue cameras still in place and integrated new network cameras across high traffic areas of the campus and some higher risk areas, such as the routes through parkland between the dormitories and the main buildings.
By covering these areas using AXIS 232D+ and AXIS 233D network cameras, the system was able to provide a deterrent against crime and peace of mind for students heading home after dark. Removal of old monitors, multiplexers and video recorders and replacement with three HP servers for storage and the use of Milestone XProtect Enterprise software has made storage and management of images much easier and made the control room a pleasant place to work.
The system now offers options of integrating with the campus’ student access control system. In the future it could also be linked with ANPR to help control access to the campus’ car parks.

“Our partner, Check Your Security, understands our vision and keeps inspiring us to think bigger”