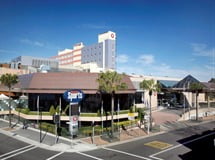 Installing a large electronic security solution like this one, with its layers of development and redevelopment, is always going to be a challenge and it’s no surprise when Murr tells me the site has undergone constant add-ons and improvements for 40 years. In one such instance an entire local street was bought and built over.
“The installation of the new surveillance system is following a process of construction at the club, a 4-stage building process that will include the ongoing installation of a full IP CCTV solution,” Murr explains.
“As the building works are going on, the club is continuing to run, which has been part of the difficulty of the installation. We can’t have any camera down at any time. In the area we are working on now, they relocated gaming to another section of the club and we relocated cameras to that location overnight so the system was operational by morning and there was no downtime.”
While we talk about the installation process, we walk around to the gaming floor which is where Phase One of the system has been installed – it’s a busy, sprawling club and the gaming floor has a good crowd. Looking at the flush ceiling design I can see space is tight. Murr points out the cameras around the perimeter of the room.
“Look at those,” he says. “A major challenge we had to overcome is that no cameras are allowed to be installed on the floating ceiling in any of the floor areas – the issue is, how can we get images of the gaming machines if we can’t put cameras above tables?”
“Instead we had to go right around the perimeter and use good zoom lenses and high camera quality to capture the images we needed. This demand impacted on our choice of camera – we needed a full body camera so as to retain the ability to choose the lenses we needed now and in the future.”
That made commissioning of each individual camera an exacting process, surely?
“Yes it did,” Murr replies. “Coverage is designed not to miss anything in the scene and the quality of the image and the framing of the scene and selected depth of field is such that if you want to zoom in, the image is not going to pixelate. That’s what the SP509 gave us in this environment.”
Was it a hard installation? I ask, looking around at the busy gaming floor, packed with tables and machines.
“Yes, it was very hard, the ceiling heights were a special challenge – the cables go from patch panels then up to an even higher point, then across the room, while the bunker is down in the basement,” says Murr.
“Throughout the gaming floor you can see that the ceiling design is amazing – it’s flat and flush which looks great but it really makes our installation impossible.”
“See those hatches in the ceiling near the cameras? Inside every hatch is a patch panel and that’s how the cameras installed nearby get onto the Cat-6a cable.”
Looking up at the towering ceiling it beats me how the techs managed to install some of the cameras even with the help of hatches. They must have turned their shoulders inside out with some of them.
“We had 4-5 guys during the install, working after hours,” Murr continues. “Sometimes there was work that could be done during the day but when you are doing cutovers of cameras in the gaming area it has to be after hours.”
What about the servers and risers and cable trays – in a legacy site like this they must be overflowing? I ask.
“Yes, they are busy,” Murr agrees. “But everything we’ve got is Velcro-tied to a dedicated catenary cable. It’s away from power and never goes over or through it. The cable we use is one colour and it’s known as being for security so no one else goes near it.”
Part of the installation process included commissioning and ongoing maintenance and to assist this process there is remote access online.
“We do a lot of repairs remotely,” Murr says. “We also have a walk&view system where maintenance can be done using a smart phone.”
The high quality Panasonic cameras also demanded careful commissioning.
“With a camera like this you need to know your stuff when you set up,” Murr says. “You can’t just hit the autofocus button and move on. If the environment typically changes throughout the day, you’re not done, you’re going to have problems.
“The crew attended a comprehensive training session on all the camera settings so when they are in a scenario they need to address, they can. Because our installers are technical and love to play with new products, they are certainly getting the best out of it at BSC.”
Something else that needs to be taken into account during the installation/upgrade process is the legacy hybrid solution. This old system is still entirely operational but as the current installation progresses it is being carefully cut over and decommissioned, piece by piece.

In the control room

Next, we head into the control room, which is squeezed into a corner by a mountain range of ARU racks. The working video wall is compact given the high camera numbers, it’s narrow and it’s tall. In fact this is probably one of the most full-on video walls I have seen.
Often when you look at a video wall like this the quality of the images is inconsistent thanks to the variable quality of the cameras installed but this one is noticeably consistent.
Having recently reviewed the Panasonic WV-SP509 camera in a foyer I pay special attention to the SP509 in the rugged parking station applications at BSC, where it is peering from shade into bright sunlight. The camera does not back down from this demanding brief. It’s a strong image front to back, with useable depth of field pushing right out into the street.
“And the Geutebruck system handling the cameras is unbelievable, it’s phenomenal,” says Murr. “I haven’t found a product that beats it. Look at these live scenes – they’re HD at 25fps will multiple movements with 170 cameras and there’s no visible frame dropping – none at all – that’s showing you why we have that dual viewing and recording system offering maximum bit rates.”
The club’s operator pulls up a camera on the gaming floor and we get a look at what Murr has been talking about all this time. Wow, I say, that’s just awesome. The live image is sharp and objects, including faces, are clearly defined, with colours well-rendered and plenty of light nuance. Depth of field is strong. Multiple movements in a single scene don’t cause overall latency in the image to my eye. From the patterned carpet to the blinking LED lights on the machines to clothing and faces, this scene is very tight.
Usually when you see a camera of this power it’s installed externally and set up high to handle a very large scene like a carpark but here in the more compact internal spaces of BSC with variable but still good light, the SP509 is just killing it. There’s a lot of capability to spare, too. I estimate the detailed depth of field here to be about 15 metres, which is a big chunk of floor from a single camera with a &&&^-degree viewing angle.
Next we view recorded footage. I think I can see a slight difference in the quality of the recorded scene playback – some subtle image attenuation that might be a slightly lower frame rate and dropped resolution giving a softer overall scene but it’s hard to be sure. A person in the recorded scene waves their hand and their fingers are clearly defined throughout the movement. We can see stripes on clothing, numbers on machines. We see the colours of buttons and LEDs as the cameras successfully overcome flare.
“I do love the Geutebruck solution. I’ve never seen a system that can do so well with this volume of cameras,” says Murr staring at the monitors. “It’s not just handling the gaming floor. Look over there at that scene in the carpark. There we are doing numberplate recognition – the 509s handle part of this, showing the plate and the vehicle and the overall scene – and we also use a specialised numberplate camera that incorporates IR illumination synchronised with the camera shutter. This camera does nothing but look at the plate – it can do this at 160kmph with no light. It’s installed and integrated with the CLUBLINK management system.
“And we also have other interfaces, including Geutebruck video motion detection. The VMD curtain picks up cars arriving at the club automatically and the Panasonic HD PTZ swings around and zooms and focuses. Down in the control room the event appears on the monitor and brings up event footage in a set order.
“Operationally, there’s live footage of the vehicle arriving is shown first, then the event is looped over and over, showing the operator the incident. Finally the incident is paused and all this happens automatically. The operator does not have to look for an alarm event, it’s brought to their attention by the GUI – which is interfaced to the VMD,” Murr explains.
Some of the credit for the efficiency of the operation has to go to ARA’s own product, CLUBLINK.
“All the alarms happen automatically because of the HLIs between the sub-systems and our own CLUBLINK GUI which sits over everything and brings it all together,” Murr says. “3D Floor layouts of the Club are displayed on the GUI, giving access to each camera without having to remember camera numbers. Predetermined scenes are set up in our alarm GUI during commission and alarms have to be acknowledged by an operator. It’s just perfect for this application. We can also interface to Tecom access control, alarms, duress, and VMD to name just a few.”

Bankstown Sports Club’s new full IP solution is a benchmark system. It offers serious performance at multiple levels and looking at its fundamentals you get a clear sense of what the best solutions of the next 5 years will be offering.
They’ll have excellent camera performance and super-fast subnet architecture designed to handle the heavy loads of quality HD cameras being viewed live and called up as recordings. They’ll also employ the best network components and designs focusing on simplicity of replacement and easy maintenance.
Ease of management is another key aspect of this solution. Geutebruck’s GSCView is a popular management system for good reason and its performance bias gives it the edge in an installation like this one.
Finally there’s integration. At BSC this includes HLIs supporting alarms and access control, VMD and Bosch Security Escort all managed via ARA’s CLUBLINK software. The result is a solution that is impressive now and when completed will offer the club outstanding performance in a package that’s as intuitive as it is capable.
Linkedin
Facebook
Twitter
Email
Copy URL
Print
Previous article
LenovoEMC Partners With Milestone, Introduces NVRs at ISC West
Next article
FLIR A310 f Fixed And PTZ Cameras