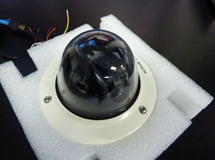 NEW from Bosch is the Starlight HD 720p60 camera family. These cameras are built around a progressive scan CMOS sensor offering 720p resolution (1.4MP or 1312 x 1069 pixels) and a frame rate of 60ips. Bosch is the second manufacturer to head to 60ips (Sony was first), which gives superior performance in fast action scenes.
These cameras are all beautifully built, just as you’d expect from Bosch, and the options in the range are also on the money. Users can select a full-body camera, a vandal dome and a tough IP66-rated outdoor dome. There’s a range of Super Resolution HD lenses letting you select from 1.8mm ultra wide angle through to 40mm telephoto. All of these units are PoE and have a bunch of remote features making programming and maintenance easier for all you installers.
Obviously the standout features here are those low light numbers and the increase in frame rate but there are some other neat things worth taking a look at before we put the Starlight HD through its paces. The first of these is Bosch’s Intelligent Dynamic Noise Reduction (iDNR) which actively analyzes the contents of a scene to reduce bandwidth and storage requirement.
The result is a reduction in bandwidth and storage requirements of 30 per cent without impacting on quality of resolution or smoothness of motion. Supporting this are compression parameters allowing 8 user-definable regions of interest to be set. Another strong feature is Content-Based Imaging Technology (CBIT). This uses Bosch’s Intelligent Video Analysis (IVA) to enhance image quality. The way C-BIT works is by automatically detecting objects like faces or cars and tweaking imaging settings on the fly for best performance.
The cameras have the latest version of Bosch IVA which detects, tracks and analyses moving objects while keeping alarms to a minimum. In addition, intelligent Auto Exposure (iAE) improves the contrast of important objects in the scene in both bright and dark areas.
There’s also a face detection feature that finds faces in a scene and forwards a high quality JPEG image of the best shot of each face when the face disappears from the scene. The cameras are all ONVIF Profile S compatible and feature selectable sharpness.
There’s a video security app to give access to the camera from anywhere. The app gives control of all cameras including panning, tilting, to zoom and focus functions. Dynamic transcoding allows playback of images over low bandwidth connections. The IVA has retrospective forensic search capabilities at the browser.
There’s 3-level password protection, SSL certification, and 128-bit encryption of video and audio. The Dinion option has a unit weight of 690 grams without the lens. Operating temperature range is good at -20 to 50C and there’s also motorised back focus with 1:1 pixel mapping for accurate focusing.
The cameras have multi-streaming features delivering multiple H.264 streams along with an M-JPEG stream. There’s an SDXC slot for edge recording up to 2TB (when 2TB cards are available). The cast-aluminium body of the IP66-rated dome can withstand the equivalent of 120 lbs of force, and the extended operating temperature range of each of these cameras broadens operational capabilities.
Keeping installation easy is another priority for Bosch cameras. You drive these and other functionalities through wizards that make it easier for installers to set up a camera. These wizards are accessed by a web browser or you select buttons on the camera. For instance, there’s a range of automatic lens wizards making it simple for an installer to accurately zoom and focus the cameras for both day and night operation.
Something else that’s neat is the way Bosch has worked to make the installer’s life easier by including selectable application profiles into the camera.
“There’s Indoor profile, Outdoor profile, Motion profile – that maintains optimum shutter speed and frame rate to view traffic,” Brewer tells me.
“Then there’s Vibrant profile – where the image almost becomes equivalent to a studio camera – Vibrant brings the colours right up. Other profile options include Intelligent Auto Exposure – you use this in a scene with bright backlight or sunlight. Finally, there’s a Low Light profile.”
There are also 2 regions of interest in a scene that can be set up using the remote electronic pan, tilt and zoom controls. These regions can be used to produce separate streams for remote viewing and recording of high security/high traffic/high value areas of a scene. Meanwhile, the IVA intelligent tracker can also detect and follow objects within defined regions of interest.
Other features installers can adjust remotely include remote auto focus, and remote zoom on the varifocal. In fact you simply set the camera up, frame the scene then hop off the ladder and start doing fine tuning via browser. It’s too easy. You can browse around the camera adjusting zoom, full range auto focus and local range. It’s all very simple. An automatic varifocal feature means that the zoom can be changed without opening the camera. And when it comes to actually installing the units, the choice of installation options includes flush, wall, and pipe mounting.

We get started on the demo with a photo shoot while the boys explain some of the finer points of Starlight technology. According to Malesevic, there’s a new processor with the extra horsepower contributing to things like Content-Based Imaging Technology and the advanced IVA.
“The Intelligent Dynamic Noise Reduction onboard the camera dynamically reduces the noise in the image – slashing bandwidth by 30 per cent,” explains Malesevic.
“The camera manages this by optimising the detail-to-bandwidth ratio using temporal and spatial noise filtering. You can also adjust compression parameters with 8 user-definable regions of interest that allow you to cut bandwidth and storage demands by tweaking vital areas for best quality images.
“I took this Starlight camera home last night and had a quick test in the house with all the lights out and the images were just unbelievable,” Malesevic says. “With practically no light in house at all, the colour was still on and you could see everything – it was unbelievable.”
Once I get the camera in my hands I can feel and see that it’s a really nice unit, as Bosch hardware always is. We are testing and photographing the vandal-proof Flexidome version of the camera but as mentioned earlier, there’s a full-body version and an IP66-rated tough mudder, as well.
We test the camera in the Bosch demo room at Huntingwood, starting off by turning out all the lights and monitors. The only remaining light sources are the test monitor and a bar of sunlight coming in under a door in one corner. Interestingly, while the room appears dark to the naked eye, on the monitor the crack under the door looks blinding bright as the opening scene from Close Encounters of the Third Kind.
Bosch’s demo room is relatively longer than wide – perhaps 7 by 5 metres. Brewer pulls a screen down to cover the monitor and it’s even darker in the room now. While I didn’t have a light meter with me at the time, I later tried to recreate a similar environment at the SEN office and came up with ambient light levels ranging from 2.5 lux in front of the monitor to less than 1 lux in the far corner of the room.
These comparatively high light levels precluded us testing the miniscule 0.017 colour claims from the folks at Bosch, though I can confirm the camera didn’t go into monochrome during our test procedure. My initial sense of performance on the monitor was of the retention of extremely good colour rendition from front to back, good depth of field and consistent performance across the entire scene.
During the test we also challenged the camera by moving around to create motion blur and the Starlight handled this well. I also tried the hand wave to check the 60ips – it definitely makes a difference with fast movements – not surprisingly this is more noticeable when the lights are on.
Now Brewer stands towards the back of the room as I peer behind the blackout screen. Looking at the monitor it is clear there’s a person standing at the back of the room and while I can’t positively identify Brewer’s face, all other aspects of hair colour, tie colour, shirt colour and general attire can be made out.
This room is very dark and still the camera has not gone to monochrome. Where this camera seems to really excel in our test is when there’s a very small amount of light available – a lux or so. At those levels you’re still getting unusually strong colour, great depth of field and all scene detail. It’s very impressive performance.
Something else that’s excellent is the lack of noise at these low light levels. At this point I take images of the monitor with my trusty Lumix but they don’t give a particularly accurate portrayal of camera performance. Ok, so we know this camera range is capable in low light, but what about backlight? How good are Starlight cameras when it comes to wide dynamic range?
“The other side of this camera is its ability to handle WDR when selected for that,” Brewer explains. “When you are setting the profiles it sets the threshold where it switches the dual shutter, which helps with WDR. There’s an extra 16dB of dynamic range that comes in automatically and activates the dual exposure when the application requires it and when that’s not required it goes back off again.”
Because we are testing a camera installed inside we use a flashlight to challenge the camera’s ability to handle intense light while delivering a recognisable human face. Further challenging the camera, Malesevic, who is in the pilot’s seat, sets the profile to indoor mode – you’d use outdoor mode in full sunlight.
Faced with these challenges, the Bosch Starlight does well – we are easily getting court admissible images. Probably what’s most impressive thing though, is the fact the camera is also doing well throughout the rest of the scene despite having a single, strong point of light in its eyes.
After the test I check incident light using the flashlight at half a metre and the reading comes back at 10.5 EV – that’s about 3600 lux in a single point. Close light sources are very challenging for any camera to handle without erupting into blooms. It’s very good work from Bosch.
Brewer says he’s in a bit of a conundrum with the Starlight, a camera that has upped the bar over all the other cameras in the Bosch stable.
“This new HD camera is better than our other low light cameras – it’s an excellent performer in low light and it does exceptionally well with backlight as well,” he says.
“Now we’ve got an HD camera that has better low light performance than SD and with a price only a few points above standard definition cameras. It’s a big step forward.”

Features of the Bosch HD 720p60 include:

“Now we’ve got an HD camera that has better low light performance than SD and with a price only a few points above standard definition cameras. It’s a big step forward”