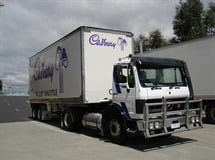 CADBURY is the second largest confectioner worldwide and Australia’s leading chocolate and confectionary supplier. Cadbury holds a 53 per cent market share in Australia giving them the number one position in chocolate with a strong presence in other confectionary. Cadbury Australia has a major manufacturing base in Melbourne, Victoria, and it’s warehousing and distribution facility covers an area greater than the Melbourne Cricket Ground. As a division of the world’s second largest confectioner, Cadbury Australia has to be extra vigilant of its processes and procedures in order to uphold the integrity of the global Cadbury brand. To achieve this and fulfill the company’s commitment to providing quality product to customers, it is critical that all areas of the business are fully secure and not exposed to potential contamination.

With stringent world-class manufacturing standards, Cadbury Australia’s challenge is to ensure a controlled environment across all processes. This means the site’s perimeter security system plays a role in ensuring outsiders cannot access the manufacturing plant. All products are packaged and labelled as required by Australian and Federal Food regulations; and it is crucial as per these regulations that there is no risk of contamination. “We have an extremely high duty of care. When you’re selling confectionary to the public you have to make sure that what is written on the packet is in the bag and nothing extra,” explains Cadbury’s maintenance planner, Gordon Menzies.

“We have an extremely high duty of care. When you’re selling confectionary to the public you have to make sure that what is written on the packet is in the bag and nothing extra”

This imperative decrees that the entire operation requires a high level security system able to cater for the large amount of activity and movement that comes from such a substantial distribution centre. Before Cadbury Australia’s review of its perimeter security, there were a number of different technologies securing the premises, including microwave beams, cameras and a chainmesh fence. The chainmesh fence was installed for many years and the company experienced numerous incidents of people cutting holes in the fence to forcibly gain entry. Because of this and the other technologies deteriorating with age, the Cadbury team had to find a perimeter solution that would detect and deter people and ensure that no unauthorized personnel entered the site.Cadbury Australia required a perimeter security solution that would:* Provide a deter and detect solution 24 hours a day, 7 days a week, fulfilling Cadbury Australia’s duty of care* Add credibility to the Melbourne premises, positioning them as one of Cadbury internationals highly secure warehouse and distribution sites with an obvious focus on product security, quality and consumer well-being* Be safe for all employees and customers on-site* Provide a multiple zone system for management of different fence zones* Reduce the need for on-site perimeter patrolling security guards and significantly reduce security expenses.

After comparing various perimeter security systems, Cadbury Australia made the decision to install a PowerFence from Gallagher Security Management Systems (GSMS) around its premises in Melbourne. The facilities protected include the large distribution warehouses, manufacturing facilities, car parks and shops, ensuring that Cadbury Australia has full control of its site. The PowerFence covers 4000 metres around the perimeter of the Melbourne plant and has with 12 different zones. The separate zones give management the capability to manage sections of the fence separately. This was a particularly important requirement as the site has a school on one of its boundaries. With the multiple zones, Cadbury is able to isolate the zone closest to the school to avoid potential injuries. Since installation of the PowerFence there has not been one attempted break-in at the Cadbury site – the PowerFence is doing its job at successfully deterring would-be intruders. That’s important because as the old security technology has continued to deteriorate the PowerFence system has taken over as the complete security solution for Cadbury Australia.“We haven’t had one issue since we turned the fence on. It all stopped,” says Menzies. “We now rely very heavily on our PowerFence system.”Installation of the PowerFence and its success in deterring intrusion has resulted in significant monetary savings for Cadbury. The business now saves an estimated $1 million each year in manpower costs, as the company no longer need security guards to patrol the huge fence boundaries.” As a result of the system, Cadbury has been able to reduce security staff to two, largely because the PowerFence has a central monitoring point. The security officers are also very happy with the new perimeter security system. “When you have the guards on site embracing it – it goes along way,” says Menzies. The PowerFence has also played a large part in Cadbury’s risk management programme. “We’ve got our own risk assessors within the business who come out and do surveys, they were really happy to see the PowerFence go in” says Menzies.

“We haven’t had one issue since we turned the fence on. It all stopped. We now rely very heavily on our PowerFence system”