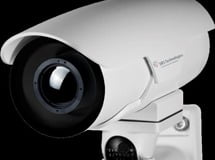 AVAILABLE from local thermal imaging tech house Infratherm, the DRS WatchMaster IP Elite thermal camera offers integrators and security managers the awesome fundamentals of thermal imagers – the ability to detect and confirm intrusion at very long range with no support from expensive-to-run lighting sources – in a compact form factor and at an affordable price.
I like thermal cameras and the more affordable they get the more I like them. They won’t give face recognition but what they do give is confirmation and general identification of intrusion at extreme ranges and in appalling conditions. They can see in total darkness, peer over water courses or bays and carve through rain, mist, fog and smoke.
This new Watchmaster IP Elite is a particularly good example. It’s built by specialist thermal manufacturer DRS. It’s weatherproof, tamperproof, networkable, can be integrated into ONVIF compliant VMS solutions or NVRs or just fire you an email or text intrusion alert.
I’m checking out the camera with Infratherm’s John Robinson, Brad Ballesty and Matt Nolan at the company’s office and workshop at Castle Hill in Sydney. We view images on screen in the board room across a LAN connected to a camera mounted on the outside of the building and looking across the carpark.
But before we charge into the specifications and performance of the WatchMaster IP Elite, I can’t help dropping anchor over the distributor for a moment longer. Based in Sydney, Infratherm has spent decades building up a portfolio of high quality solutions including forward looking infrared cameras, infrared thermal cameras, HD thermal imagers, thermal imaging, and radiometric systems and analytics.
According to Infratherm’s CEO John Robinson, something that makes the company special is the fact it’s not a single source supplier. Instead it carries a gilt-edged basket of products from makers like General Dynamics, Opgal, ExacqVision, OD Security, Jenoptik, RVision, Controp, Nova Sensors, L3, SRI International, DRS, NEC, Santa Barbara Infrared, Meprolight and JetProtect Corporation.
Unlike single source suppliers restricted to their principal’s range of products only, Infratherm matches customers’ needs from a global network of suppliers to provide a specific and cost effective solution for their customers. What this means is that instead of trying to fit square pegs into rounds holes, Infratherm focuses on offering customers a selection of options closest to their needs, allowing them to select on the basis of product strengths. The company then hangs around and makes sure the solutions work and it specialises in tough niche applications.
It’s an interesting business model for a number of reasons but for me what’s most striking is that it’s based on an elevated level of customer service and support that’s likely to become more common as suppliers try to differentiate themselves from their competition.
“We try to stay ahead of the technology curve, to understand what the emerging technologies,” explains Robinson. “We’ve done that for 20 years. If we decide we need to form a relationship with a supplier we do it very early. This ensures we have a good understanding of the technology and we can set customers expectations correctly in terms of time and performance, which is very important to us.
“We also have a history of training people how to use technology properly and helping them to maintain their solutions – and we don’t carry anything we can’t fix. That’s just the way we do things. You can see old cameras around the place we are in the middle of repairing. This stems from the fact that when the business began, our clients depended on very expensive equipment for their livelihood.”

We have a look at the WatchMaster IP product using DRS software that links us directly to the camera. The images are contrasty in the monochrome settings we look at. There’s no ID possible here but you can see people, vehicles, details quite clearly. It’s obvious where the buildings are, the windows, doors, shrubs.
You have to come to thermal cameras with a different mindset. These cameras are perfect for fundamental detection of intrusion – if you need to know there’s someone there, then thermal cannot be beaten, day, night, rain and shine. The image is actually better at night, according to the boys. And it has more heat contrast at dawn and dusk.
We look at the images. While depth of field is great – the scene is maybe 35m wide and 70m deep – there’s also a pretty good sense of depth of field. What I mean by this is that the sense of distance perspective is good. All thermal cameras tend to have a 2-dimensional quality about them on-screen, especially when the scenes are devoid of mid-field detail. The WatchMaster does a good job of displaying depth perspective in the scenes we view.
Watching the traffic in the carpark you get a strong sense of the value of thermal imaging in perimeter applications and in support of manned sites where security teams respond to confirmed detection. And, as ever when viewing thermal camera scenes, I can never help lateral-thinking myself into a monitoring station control room.
In these applications thermal cameras could give operators vital confirmation of intrusion allowing immediate police response instead of the strange, even dangerous situation which sees keyholders acting as mutual first responders to unconfirmed alarm events in commercial premises.