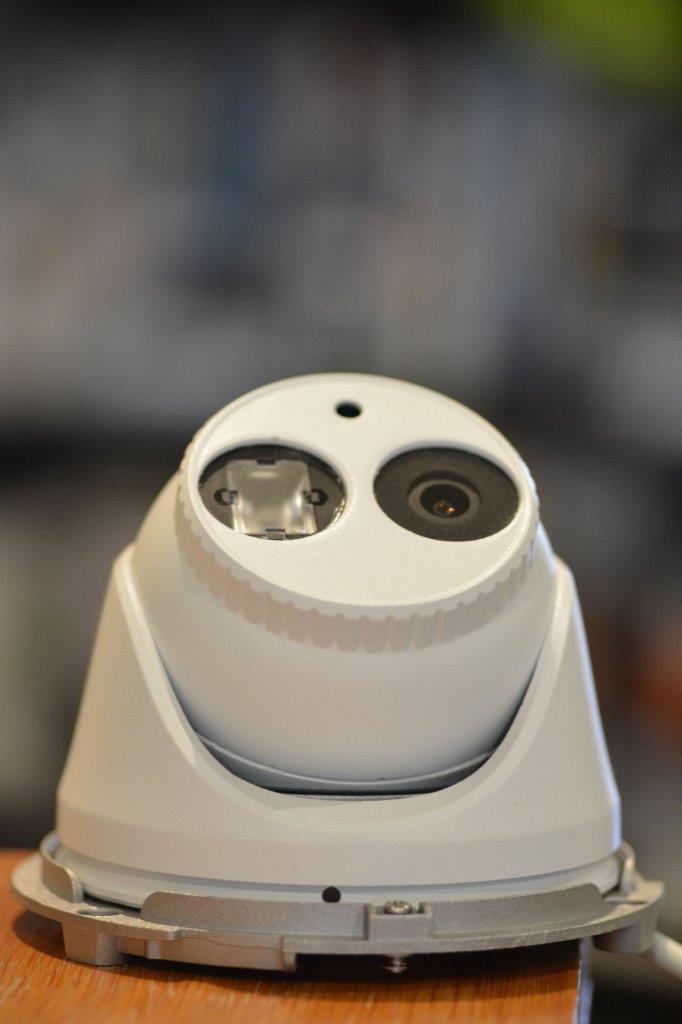 Hikvision’s HIK-2CD2332-I turret camera, distributed locally by CSD, is a compact and capable low cost day night PoE camera from the company’s 2-Line range. In this review, we’ll put this camera through its paces day and night and see if its popularity is justified.

CAMERAS like Hikvision’s HIK-2CD2332-I are popular products. They combine robust IP66-rating with decent performance, ease of installation and very low cost. How low cost? Try 180 bucks on for size. In terms of specifications, the HIK-2CD2332-I day night camera has a 1/3-inch progressive scan CMOS sensor capable of 3MP (2048 x 1536) resolutions delivered at 15fps. You get real time 1080p and a claimed minimum scene illumination down to 0.7 lux at F1.2 with AGC on. IR-assisted black and white works at 0 lux with the camera’s 20-30m EXIR Smart IR activated.

The camera has an M12 lens mount with a number of lens options, including 2.8, 4, 6 and 12mm focal lengths, weight is 670g and operating temp is -30 to 60C. When it comes to image adjustments, saturation, brightness, contrast and sharpness can all be tweaked through the camera browser. There’s also backlight adjustment, day/night, white balance, exposure settings, image enhancement and video adjustment.

We’re testing the HIK-2CD2332-I camera using SEN’s ONSSI Ocularis IS VMS running on a Dell 9020 server workstation with an Intel i7-4770 quad-core processor offering 8 threads of execution per core, a clock speed of 3.4GHz and 8GB of RAM. This machine has a dedicated AMD Radeon R7 250 graphics card with 2GB of RAM. Camera power and data are handled by a Netgear GS108P ProSafe 8-port Gigabit switch.

I spend a bit of time in camera browser playing around with settings before starting the test. Hikvision provides a decent choice when it comes to tweaking camera properties. My chosen settings are main stream at 1080 x 1920 pixels, H.264 main profile, variable bitrate, highest quality, 20fps and a 6Mbps maximum bitrate (I never get anywhere near this), with Scalable Video Coding off. I start out with camera settings on default but at 4.20pm EST, as light levels drift under 2000 lux, I increase brightness to 75 per cent, and contrast, saturation, hue and sharpness to 60 per cent.

“Starting at about 10cm and out to about 10 metres, performance is great and past this point there’s good detail through the first 20 metres of the scene”

I notice that when recording a static scene the bandwidth consumption is around 1.2Mbit/s with an average frame size of 50Kbit/s. My average snapshot file sizes range from around 900kb to 1.5Mb, depending on how much movement and noise are in the scene. Movement causes a greater spike in file size than noise levels, which grow as light levels fall. Something to bear in mind is that I took my snapshots with the wrong time programmed into the camera – take a look at the captions for the correct times of day. 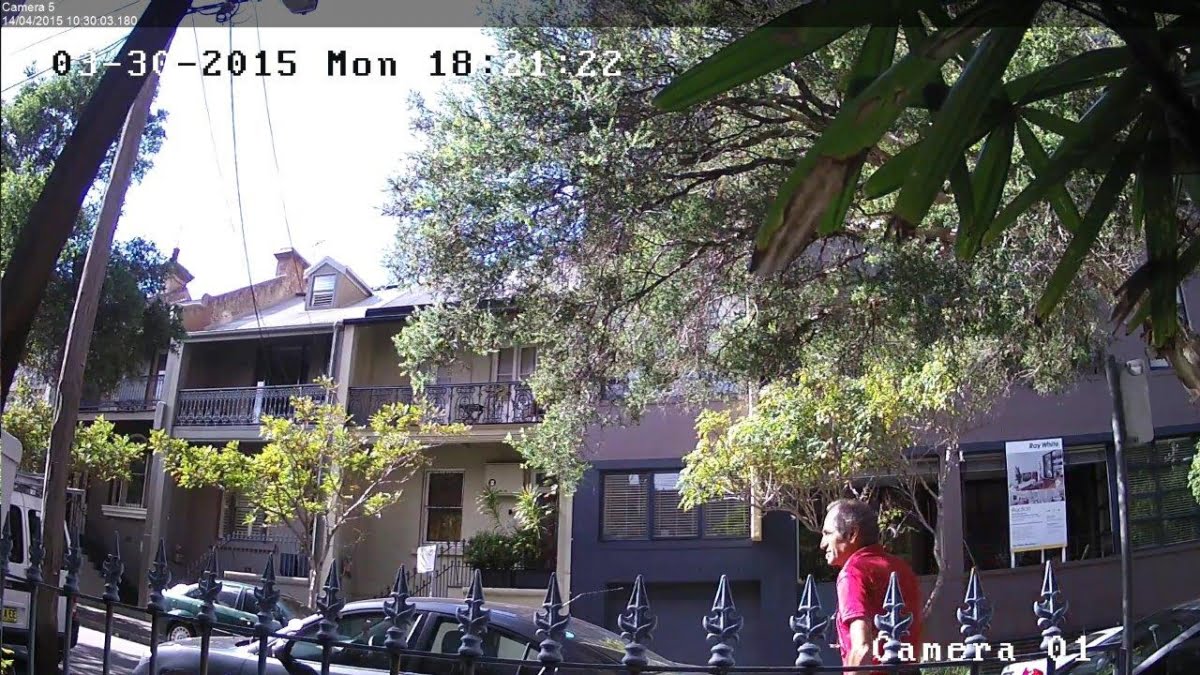 Ignore the stamped times on the images and look at the top left for Ocularis time – I didn’t sync the cameras – this is 10.30am

My first impressions of the HIK-2CD2332-I in terms of performance in daylight are that for the money it does a surprisingly good job. Starting at about 10cm and out to about 10 metres, performance is great and past this point there’s good detail through the first 20 metres of the scene. That doesn’t mean you don’t get reasonable situational awareness when pointing the camera at deep district views, as I discover later.

I start by looking across the street outside the office – a scene that’s 15-18m deep, house-front to house-front. Performance at 10.30am is crisp. This camera is not a toy. For depths of field like this one – 15 metres or less – the HIK-2CD2332-I is really in its element. I’m getting easy face recognition at 5-8m. You do see the impact of the wide 4mm lens when you digitally zoom to get face recognition at 20m. At this distance compression artefacts intrude before it’s possible to clearly identify faces when zooming. Regardless, at 20m you can see clothing, skin colour, hair colour and get a sense of appearance. An investigator could confirm identity of a known person at this distance, in my opinion.

In terms of the lens, there’s classic wide angle barrel distortion evident but given its 79-degree range, distortion is actually quite well controlled – perhaps it’s 8 per cent, maybe a little higher, which is rather good. Zooming exposes some lateral chromatic aberration evidenced as purple fringing on high contrast areas – it’s the result of the lens not focusing all wavelengths of colour onto a point of convergence. This is nothing that will impact on overall camera performance though it costs in sharpness wherever it is visible. Lateral chromatic aberration is typical of all wide angle lenses. I see no sign of vignetting.

In bright morning conditions with the camera in the shade and city buildings in full sun at 1000-1500m, the camera does well. You can see a small trade-off with elevated ISOs or slightly slower shutter speed that’s giving excellent images in the immediately shaded scene causing a challenge in the far distance (1000m-plus) as sunlit buildings and sky start to merge due to over exposure. But overall, the performance is good and the scene is composite. 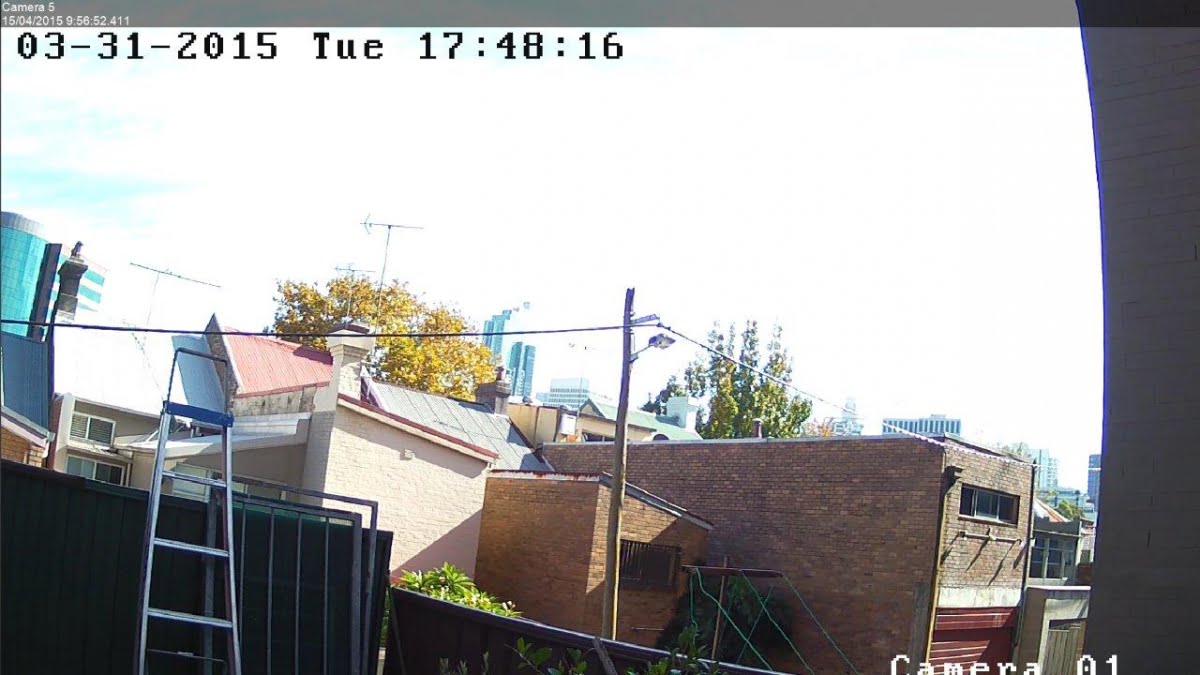 This is about 10am – some deep shade and strong light at a distance is causing over exposure in the very depths of the scene.

Where the HIK-2CD2332-I shines is colour rendition, the ability to manage scenes that include full shadow and bright light, as well as depth of field and outright resolution. I tested the camera at 1080p in order to get real time frame rate and the resolution is good. Another great strength of this camera is resistance to lens flare. I don’t know how the designers managed it but the camera proved close to immune to flare in the most extreme conditions. It’s possible to provoke reddish ghosting of the lens by including the sun in the frame but the image remains useable for video surveillance. 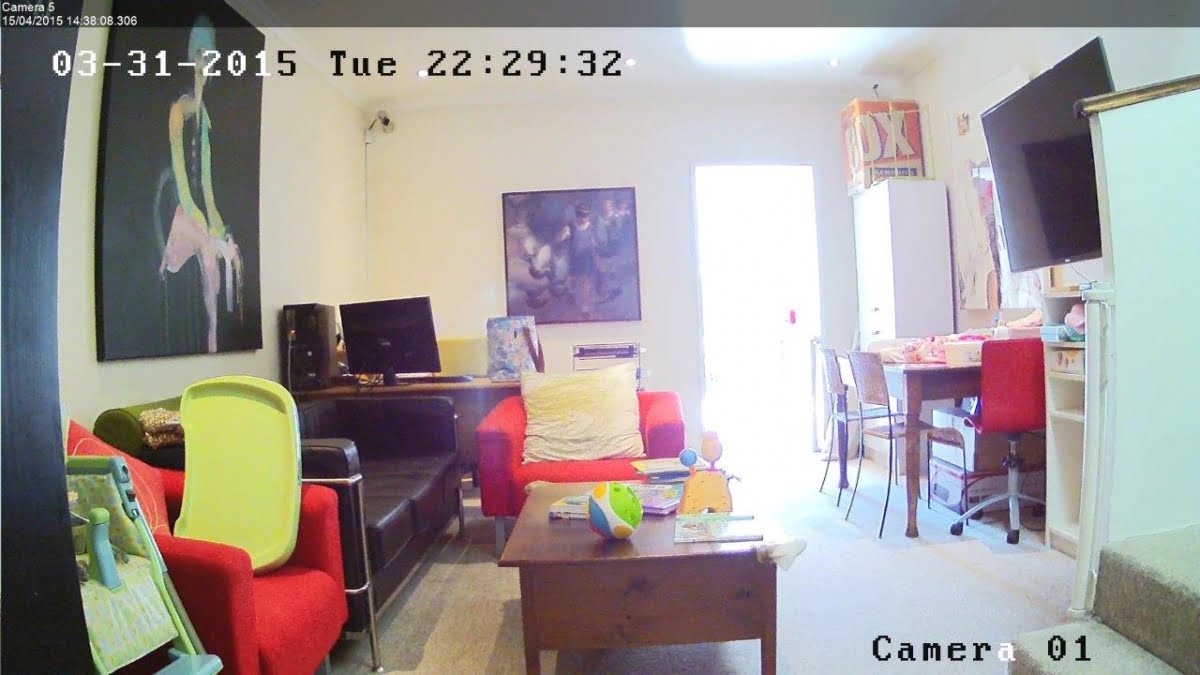 This is a challenging scene in terms of WDR performance – there’s close to 90,000 lux hitting the back door and igniting the white painted kitchen – this is 2.30pm.

Next, I take the HIK-2CD2332-I through the office and pause on the way to check its ability to handle backlight. Our office has silly backlight from direct westerly sun and the camera does fine inside the office itself, while the rear doorway is lost in a bloom of white light. I haven’t used a test mannequin in this scene but the picture to the left of the door shows retention of detail and skin tones adjacent to strong light sources. In the foreground colour rendition has good intensity. There’s a bit of smoky ghosting either from the rear foor or the lightwell above right. I can’t decide if it’s integral to the image or lens flare but given its vertical line, I think it’s to do with processing in very harsh conditions.

“Another great strength of this camera is resistance to lens flare. I don’t know how the designers managed it but the camera proved close to immune to flare in the most extreme conditions”

Out the back we have district views with objects and buildings of various contrasts at varying distances from 2-1500m. It’s a big scene that supports my observations about the camera’s strength under 20m, while revealing a capability for deeper situational awareness. This scene also confirms the presence of lens barrel distortion. In the afternoon with 90,000 lux falling on the courtyard, the image is more composite than it was in the morning.

There’s no sign of flare, even with the sun at the top edge of the scene. I’m getting a good workable image that’s about 30 metres deep and 79 degrees wide. When I zoom in, image characteristics confirm my earlier feelings. At 1080p, with a lens this wide, about 2 or 3 clicks of the mouse wheel is as much zoom as you want to use to avoid a discernible loss of sharpness. This said, you can zoom in 5-6 mouse wheel clicks and get images ideal for situational work. 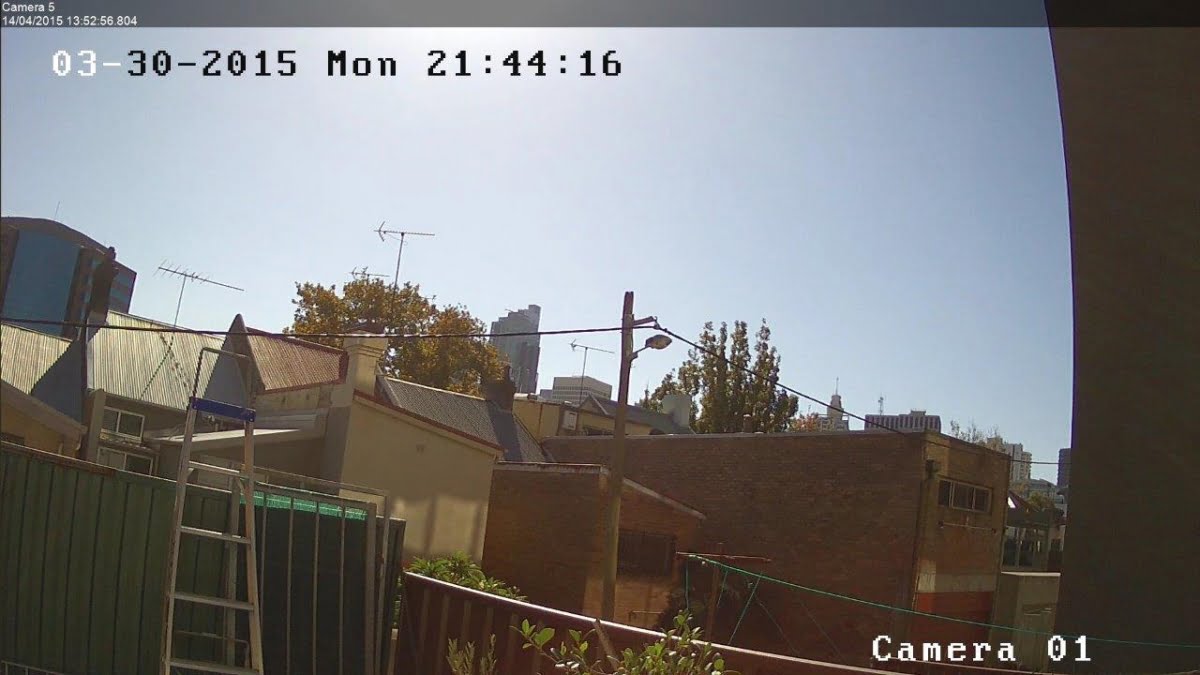 The sun is in this image top centre – it’s impressive performance and levels of detail at distance are good, too. World Square is 1000m, Centrepoint is 1500m. 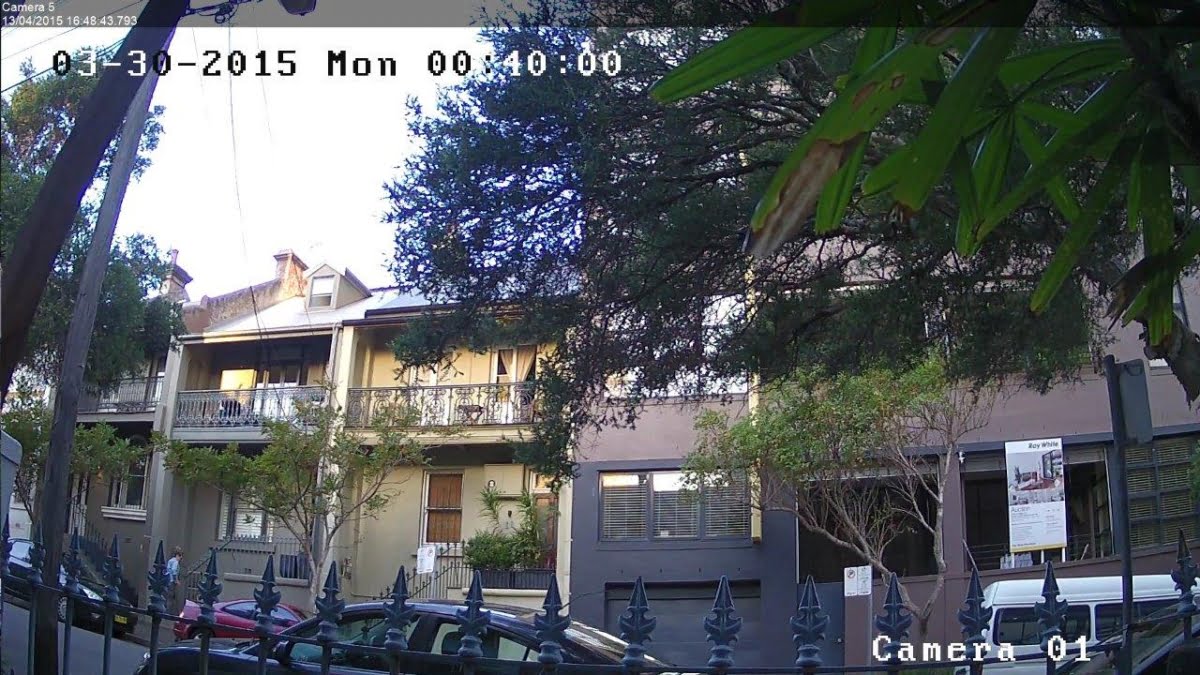 This was later in the afternoon – this is a perfect scene for the Hikvision – wide and about 18m deep, house front to house front 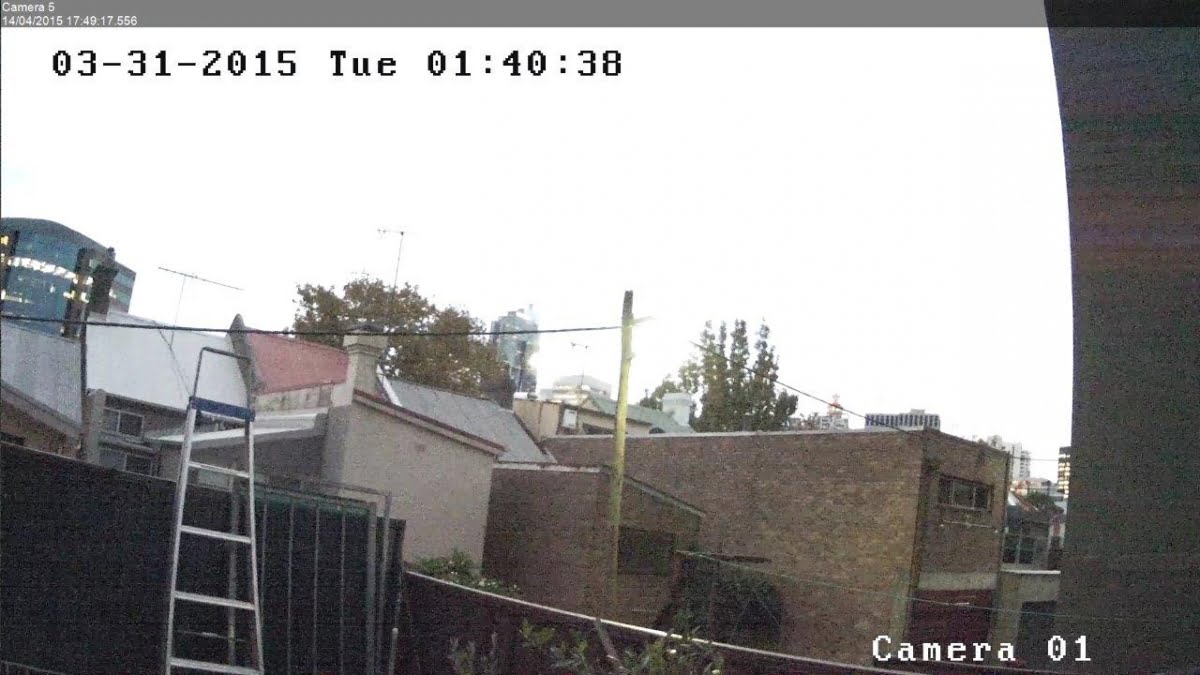 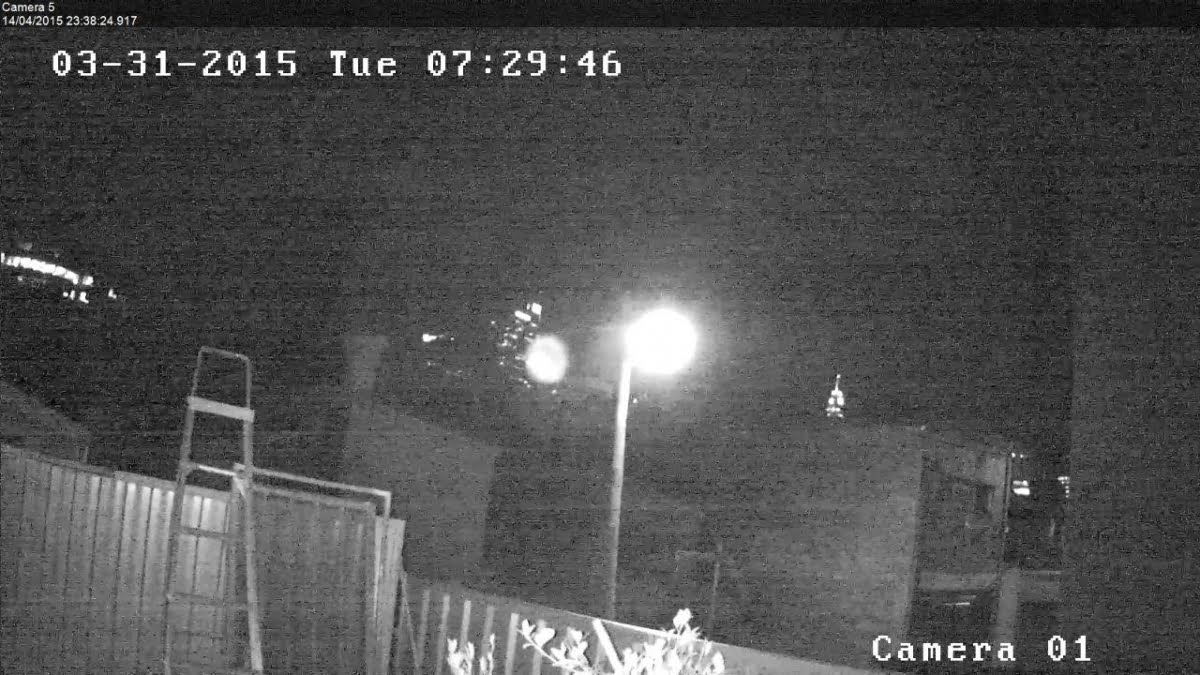 These last 3 images show the transition from light to dark – it was under 100 lux in the first, about 30 in the second and 1 lux at the lens under IR in the third.

The challenge for cameras of this type is offering strong performance at night and that’s where the IR comes in. The camera’s specifications claim 0.7 lux as the minimum scene illumination and to check this claim, I tested the camera with Smart IR off at 4 lux. The camera had gone to black at white at this light level and the image was useable for very general situational awareness. 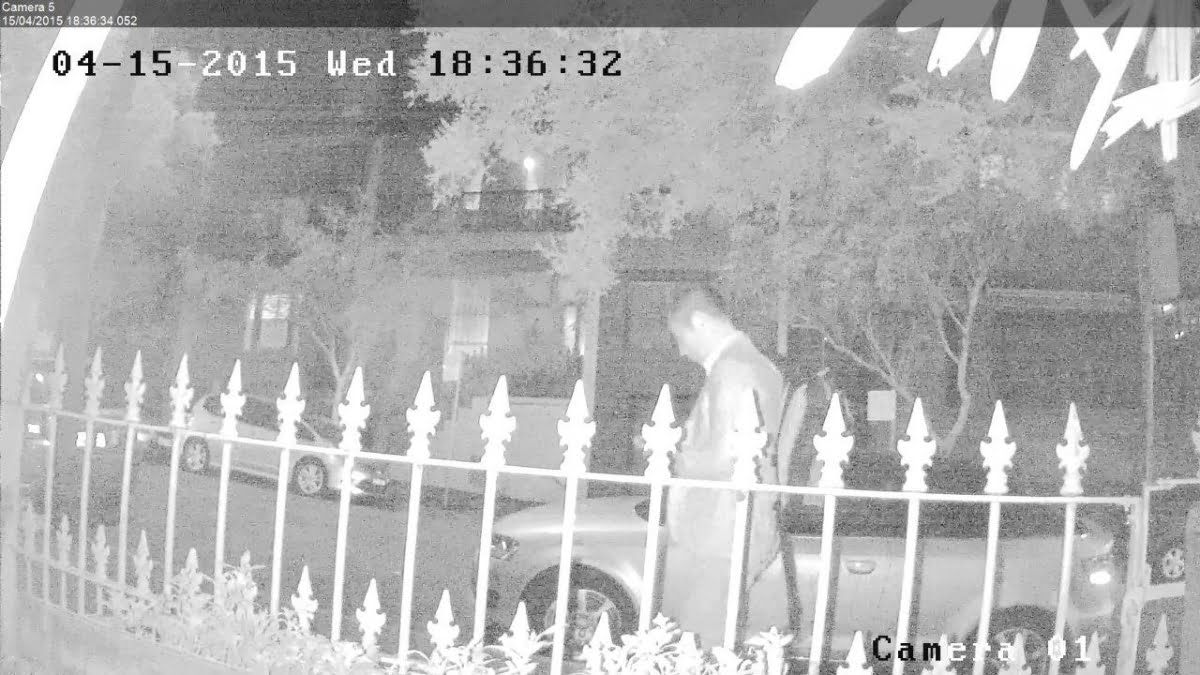 IR off at 4 lux – it’s a worthwhile image but there’s some noise which increase file sizes by about 25-30 per cent.

The closer to the lens, the better performance was. I got worthwhile face recognition at 3m but no license plate ID. Over the road at 15m I could see people walking and could discern their height and body type and guess their gender. I could see some aspects of attire but finer details were lost. The image was getting noisy – file sizes were about 15 per cent larger than the same scenes with IR on. To be frank, I was surprised the HIK-2CD2332-I gave this sort of useful performance at a measly 4 lux but if you have IR, you might as well use it.

Hikvision suggests 20-30m IR range and the longer end of this range may be discernible when the camera is installed in completely dark and open commercial spaces. But on a city street with ambient light levels of around 4 lux and a maximum scene depth of 18m, it’s hard to be certain how much camera performance relates to the IR component until you switch Smart IR on. 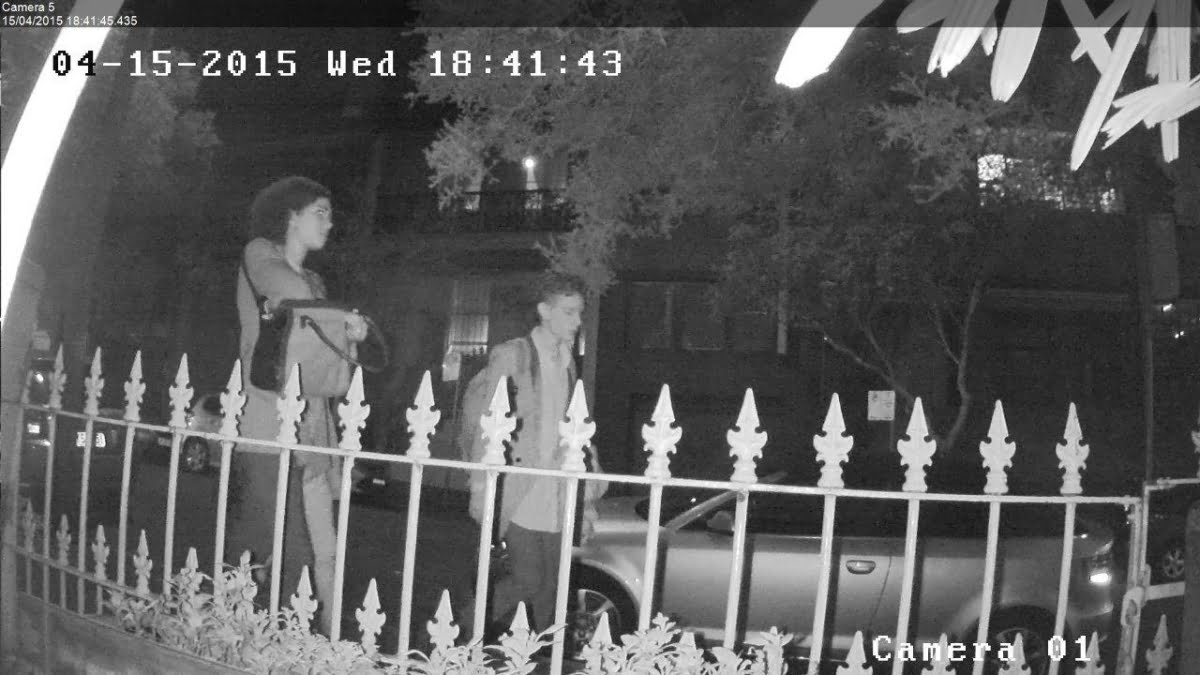 IR on in 4 lux – you can see the difference it makes quite clearly.

It makes a serious difference. Noise disappears, contrast weaves together magically before my eyes and the little dome gets face recognition under 5 metres and license plates much further out – I can see one at about 9-10m. For face recognition, it’s more about the placement of the camera as long as the subject is within about 5-7m of the IR. In this application at 15m you get situational awareness – including gender recognition and a good sense of attire.

To be honest, I’m impressed. I was prepared to be disappointed with the HIK-2CD2332-I at night and unsure how strong performance would be during the day. But this affordable little 2-Line HIK-2CD2332-I proves a useful surveillance camera when installed in applications that suit its modest but undeniable strengths.  ♦