SEN.NEWSDISCOVER THE ART OF SEN NEWS
HomeReviewsMicroPoint: Radar Inside A Cable
Reviews

MicroPoint: Radar Inside A Cable 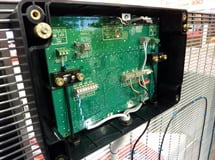 PERIMETER security solutions are a site’s first line of defence and properly implemented they can have a huge impact on security. Pushing detection out to the fence line increases the potential time responders have to reach a site before a breach in higher value areas.
What’s so sweet about South West Microwave’s Intrepid MicroPoint II solution is that it offers this vital early warning and it does so in a package that ticks every box. Cost, ease of installation, performance, reliability – MicroPointII hits them all.
Supporting the technology locally is Charlie Michael’s Perimeter Systems Australia and I meet him on his stand at Security 2013 in Sydney. Michael, formerly of Alarmcom, is passionate about his product as the best distributors always are. According to Michael, MicroPoint technology is 15 years old and this latest MicroPoint II version serves to bring the solution into networked environments.
Central to the technology, operating power, system communications and alarm signals are all transmitted using a single, patented MicroPoint cable, simplifying installation. MicroPoint cable is a copper conductor with a protective sheath. Michael says the best way to describe the system is like a form of radar inside a cable, and there’s something appealing about that concept – the ability to accurately detect disturbance in the cable with radar accuracy to +/- 3M.
“The way it works is that a pulse is transmitted down the cable between center conductor and braid. Any mechanical deflection of the sense wires causes a portion of the pulse to be reflected back to the receiver at 80 per cent the velocity of light.
“The time delay between the onset of the transmitted pulse and the receipt of the pulse reflected from the deflected sense wires is a measure of the distance that the signal has propagated in the cable that can establish how far away it is from the processing module within about 3 metres,” says Michael.
“This pinpoint accuracy of detection allows us to ensure the system ignores rain, hail and wind because these impact on the whole fence line. Such a widespread event can’t be an intruder. But if an intruder tries to breach the fence they will be detected.”
According to South West Microwave, Patented MicroPoint detection technology enables MicroPoint II to locate a disturbance along the length of the sensor cable to within 10 feet (3m).  Location information is used to create detection zones that are totally independent of processors or electronics in a process called Free Format Zoning.  Location information is used during calibration to automatically adjust the system sensitivity to account for variations in fence fabric in a process called Sensitivity Levelling.
When it comes to set up, installers can use any PC to calibrate the MicroPoint cable sensor and assign zones using Windows-based installation software which provides guidance as well as recording details of a configured system for later maintenance or diagnostics. This free format zoning allows the number and location of zones to be easily altered to meet changing site conditions.
The most common use of MicroPoint II is installation on a chain link, weld mesh or expanded metal fences, a feature called Sensitivity Levelling accommodates variations in these type of fences and in the fence fabric tension. During calibration, the sensitivity of each metre of cable is set to provide uniform sensitivity along the cable.
If there are greater threats of false alarms at any point on the fence for whatever reason you can make that section of fence only more or less sensitive.
Additional management options (Controllers) include Graphic Control Module (GCM II), The INTREPID Graphic Control Module II (GCM II) is a dedicated, Linux-based graphic system controller designed to provide large or multi-site facilities with local GUI-based alarm monitoring and control of new-generation INTREPID devices, contact-closure auxiliary security devices and CCTV equipment. The GCM II is supplied as a self-contained module, including system hardware and application software with graphic mapping capabilities for robust system configuration and management.
Michael says an INTREPID Polling Protocol II (IPP II) SDK is available free of charge to third-party developers for high level integration of the new-generation INTREPID devices into custom control applications to CCTV systems such as  Genetec, Geutebruck or whichever management system is being used on a site.
Size potential is significant and larger sites are not more complicated. If the perimeter is longer than 400m a link Unit joins multiple processing modules together into a single larger system and this can be expanded multiple times.
“It’s possible to have a 3-4km site with a single or redundant  communication lines form the first and last processor modules with two 48VDC power supplies configured with any number of zones to suite the site and customers requirements – nothing more,” says Michael.
As part of our demo, we look at a 4km fence line protected by 10 MicroPoint II processing modules supporting a single loop of MicroPoint cable. What’s so nice for installers is that MicroPoint cable transmits all alarm signals and provides power to all modules and auxiliary sensors along the perimeter.
The single sensing, power and data cable is simply cable tied to a fence during installation and it then detects all attempts to climb or cut that fence as well as precisely locating the point of attempted intrusion. Processing modules also have external inputs allowing you to run PIRs, reed switches.
While I’m taking some photos of the controller, an end user comes up to the stand and praises the system – saying it’s great, reliable, bullet-proof. Importantly, it seems he’s a relatively new convert to the technology.
“People certainly like MicroPoint,” says Michael. “Most our customers having used MicroPoint once will continue to use it. All the gear is SCEC-endorsed and 100 per cent designed and made in the US. Everything at South West Microwave is in-house, with tight quality control based on pride in its 35-year history.”

Features of MicroPoint II include: