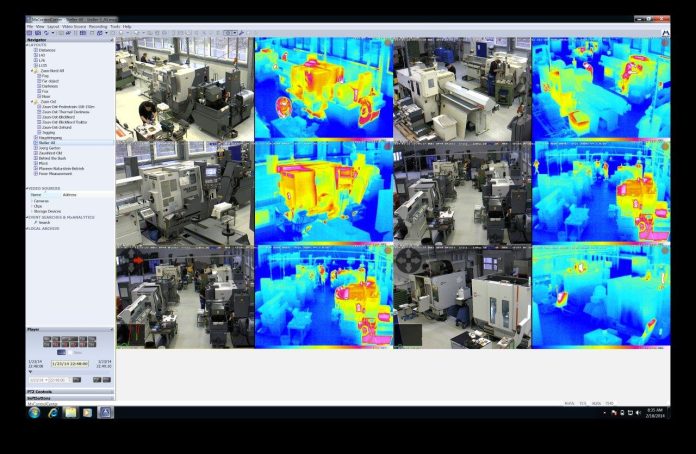 AT the Mobotix Partner Conference in Sydney last month I got a walk-round of the Mobotix M15-D Thermal camera with Julien Lenser-Hobbs. The M15 platform was built with the ability to integrate new camera sensors and thermal was a key planned development. While the M15-D was displayed at Security 2013, this is the first time I’ve seen it in operation.

Before we get started, let’s take a look at some of the specifications. The M15-D Thermal is a PoE, IP66-rated, IK10-rated poly housing with integrated sunshield. The distinguishing feature of this camera is that it’s a dual design. There’s a fixed thermographic camera as well as a removable 5MP colour sensor providing high quality optical vision.

The new thermal imaging sensor is 336 x 253 pixels and there’s a frame rate of 9Hz, which is industry standard. The thermal imager is fixed due to size and space requirements and is pre-installed on the right side of camera.

When ordering, you can select camera combinations like thermal and colour camera and thermal and black and white cameras for better low light performance. Field of view is also optional when you order. There’s very wide angle, standard wide angle – slightly less than a normal camera – and telephoto, which is a couple of degrees either side of line of sight.

The thermal sensor will not be damaged by exposure to sunlight and there’s a claimed MTBF of 80,000 hours. Many thermal cameras only have 12-month warranty – Mobotix is obviously expecting a lot more out of its unit.

Important to note, there’s no extra housing, no extra heating, no additional cabling – the philosophy is the same as it is for all Mobotix cameras. The M15-D is standard PoE and only draws 6 watts, which for a thermal camera is very low. The standard camera is also 6 watts – so the combined unit is very efficient.

What I like most about the M15-D Thermal is the fact it combines thermal and standard optical performance in a single compact PoE housing. Because it’s a finished unit installers simply hang it on the wall and do setup on the free software. There’s no stuffing about with trying to find IP66-rating housings with germanium windows, etc. You install the camera and it works. 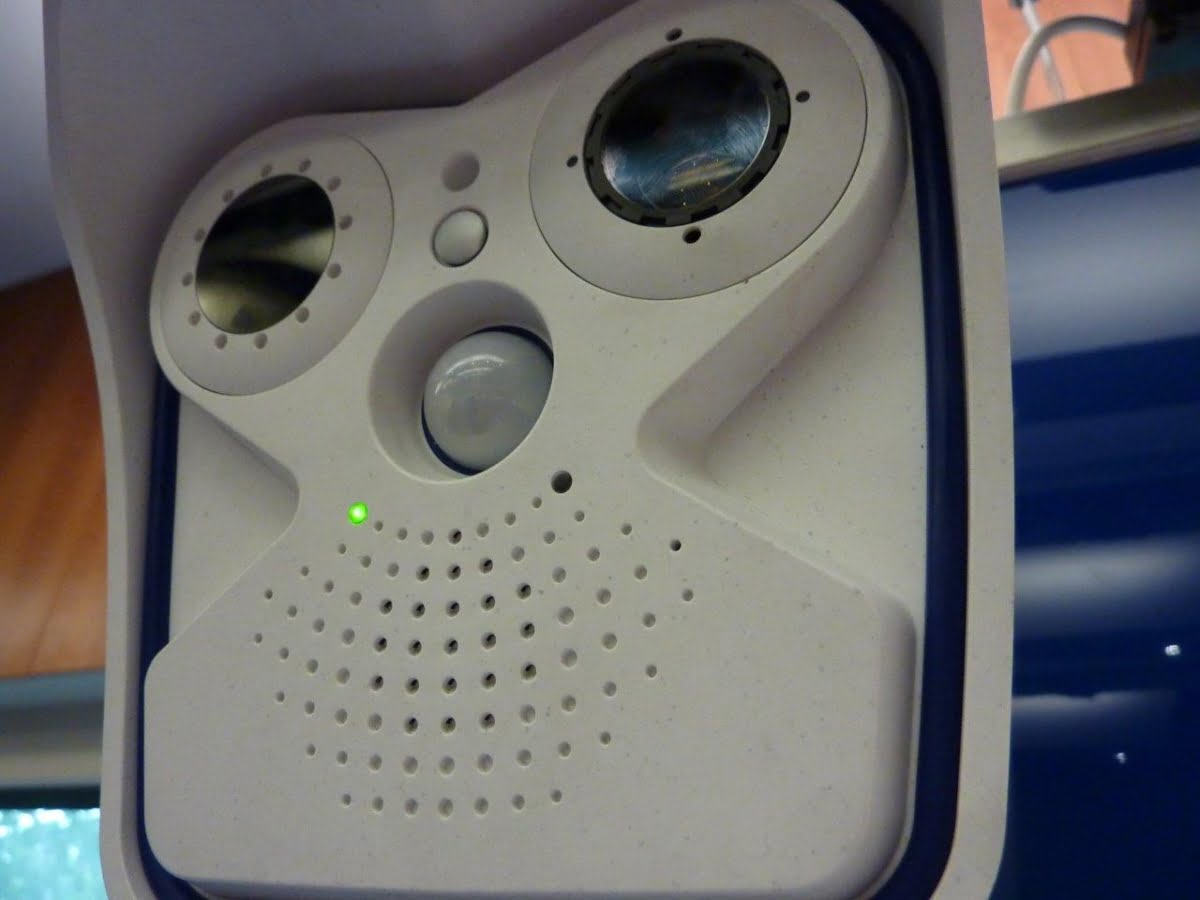 We head over to have a look at the camera in the demo hall. Temperature in here is probably about 24C. The size of the room is 20 x 10m.  Looking at the display screen it’s clear that thermal is not about optical levels of resolution, it’s about verifying intrusion and the M15-D does that very well indeed.

On the display, yellow is cooler warm and red is hotter warm, with body cores and faces being red, tailing to yellow and then green across the extremities of the body. Mobotix has chosen royal blue as its background in this setup and the contrast works very well. The range of the cameras is very good in this application – unsurprising given the M15-D Thermal is externally-rated. The chance anyone could move in this camera’s field of view and not be detected by its uncooled microbolometer is zero.

As well as looking at the folks in the hall, we check out some demo perimeter footage. It’s a good baseline to start from. It’s night and there’s heavy fog. There’s no way you could see what was going on using standard optical cameras. Even with illumination there’d be flare off water particles that would make a mess of the image.

But the M15-D cares not a wit about any of this. As we watch the screen a family of rabbits lope across the scene. They are clear as day – clearer even. There’s no chance you would miss them if you were watching the screen and there’s no change the camera’s analytics software would miss them either. Such performance would be as valuable during dust storms or bushfires as it would at night.

“In conditions like this you can forget about optical video motion and analytics solutions – but with thermal when something a small as a rabbit moves you get detection and direction of movement,” Lenser-Hobbs explains.

“This makes it very easy to see all events very quickly. Let’s face it, people don’t want to search through hours upon hours of video footage just do see a vague shape or to see nothing at all. And if you have a perimeter with optical cameras installed you still have to pay for lighting installation and operation as well as searching through all the inevitable false alarms.

“But with M15 Thermal you get reliable intrusion detection in full darkness. Depending on the application, you can also use the camera to turn on a light for a brief period so you are not wasting power and you can get more information via the integrated optical camera.”
According to Lenser-Hobbs, the M15-D works like any Mobotix camera – there’s nothing difficult about installing or using it.

“There are a couple of different features relating to the display colour,” he says. “You choose display colours, there’s an auto adjustment mode that allows more advanced installers to focus on specific high temperature items.

“Perhaps the end user wants to focus on equipment or heavy vehicle movements, not on people, for instance. These lateral applications allow maintenance crews to see if equipment is running hot. This temperature change is often the earliest sign of trouble – perhaps a fan has failed, there’s something blocking air flow to equipment or oil is running low.”

Looking at the camera bolted to the display it’s obvious that having thermal and video side by side in this compact form factor makes Mobotix a very strong solution – it’s not an enormous 2-headed behemoth in blindingly expensive stainless steel. It’s the same size as all the other Mobotix cameras that use this housing.

“With M15 Thermal you get reliable intrusion detection in full darkness”

Next, we look at scene in which there’s no way to see a loiterer with optical but with thermal you can clearly see a person peering out from behind a concrete pillar. You can also see a vehicle out front that has been running recently. Obviously there’s no face recognition or numberplate recognition when there’s insufficient light for the optical side to see clearly but thermal is about verifying intrusion in low light at medium and longer distances.

Now we also look at an internal scene. Because this camera has both video and thermal capabilities, it’s easy to compare the performance. At night with no lights you get great intrusion detection from thermal and you can see plenty from the point of view of number of intruders and what their actions are. As soon as the lights come on you get thermal and Mobotix’ excellent 5MP image quality.

Managing footage in this demo is Mobotix MxControl Center or MxEasy software (a new software platform was released at this Partner Conference, incidentally). You dip into standard camera software to activate the dual image display on one of the 2 image sensors (thermal or optical) or both simultaneously. 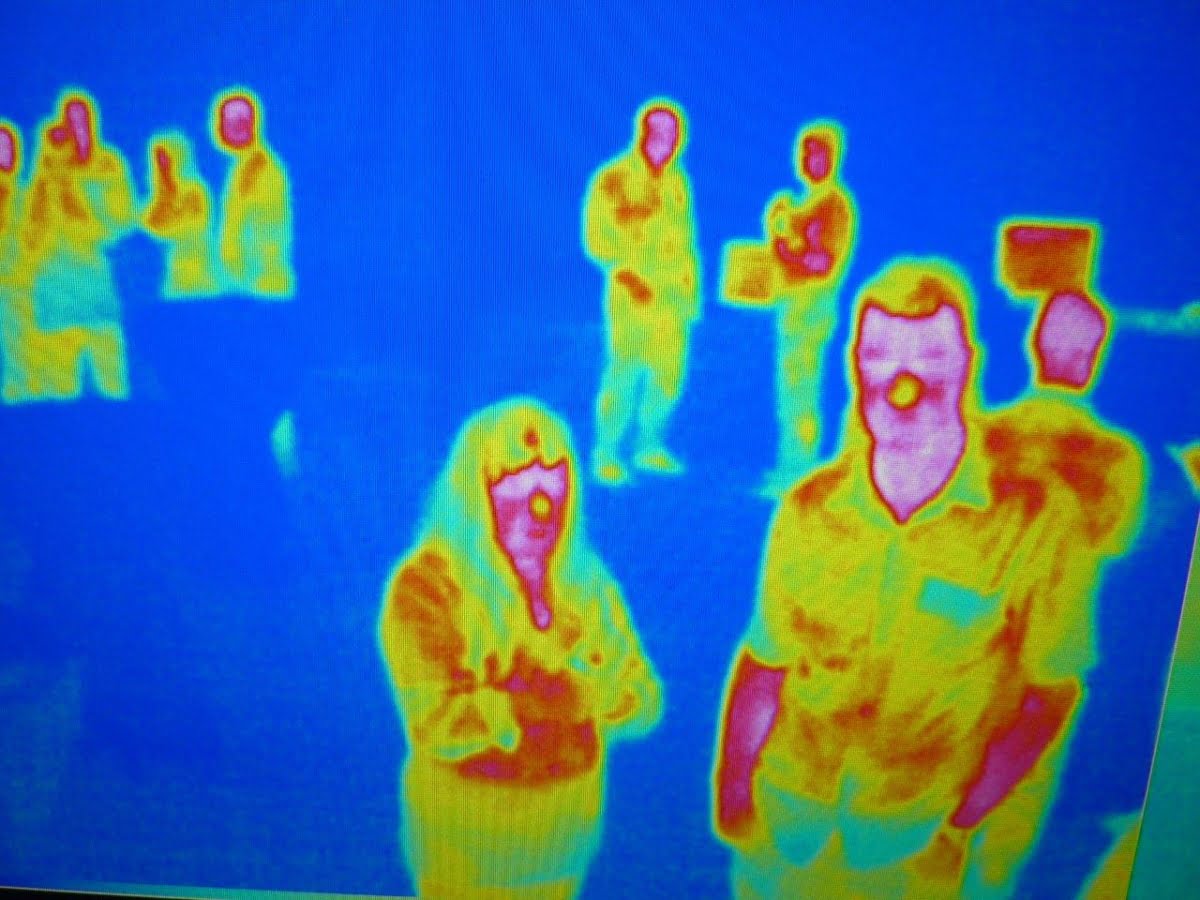 When it comes to programming configs – there are a handful of choices that are intuitive for anyone. The thermal image sensor is configured using camera software in a web browser. Display is simple, too. Users populate their displays with drag and drop. What’s great is that you have thermal and optical side by side with this camera so there’s extra information right there in front of you.

When M15-D is teamed up with the MxActivitySensor software you get reliable video analysis results of person/vehicle movements. What makes this solution so dependable is that a microbolometer is blind to optical noise from an environment – bushes, grass, street furniture, glare, shadow, whatever. The thermal side of the camera simply always picks up heat and nothing more. The optical side is a huge bonus.

Along with its integrated PIR, the M15 housing also has space inside the for 2 radar sensors with an angle of 90 degrees. The idea here is that it empowers the camera to take on more serious perimeter and external monitoring roles. Adding radar to the M15 is an interesting move from Mobotix, given most alarm sensors equipped for video verification offer comparatively low quality images. Thermal, 5MP optical and radar in one unit? Good thinking, Mobotix.