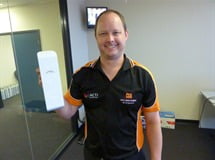 THESE compact UBiQUiTi Networks solutions integrate with the Concept LAN Ethernet Bridge (CLOE), an interface used to allow Concept RS485 LANs to be supported by networks. Typically, CLOEs are linked by copper or fibre networks but using the UBiQUiTi Instant 802.3af adapters turns the Concept CLOEs into 802.3af wireless devices replete with +/-15kV of surge protection.
The adapter sits between the Concept control module and one of UBiQUiTi’s NanoStation M and NanoStation loco M 2×2 AirMax time division multiplexing Access stations which are built around integrated antennas and give 1000 and 2000 metre ranges. The key thing with UBiQUiTi’s time slot wireless comms is that they reduce node collisions and enhance efficiency, improving latency and scalability, vital when it comes to larger access control solutions.
UBiQUiTi is no newcomer to the market and has been into wireless since 2005. The company really started making waves in 2008 when it released a range of extremely compact and very powerful IP65-rated wireless Ethernet links that put cable-free IP comms into the hands of system designers. In 2009 the company released the airMAX MIMO TDMA polling technology, a protocol that led to an entire lineup of radio/antenna systems, building on the 802.11 b/g series, including the latest NanoStation units and the powerful Rocket M.
If it was not delightful enough that UBiQUiTi eliminates the torment and expense of cabling on large and complex sites, the company’s wireless is a real brain box. Supported by airOS, airVIEW and airCONTROL software modules you can configure, monitor and manage networks of UBiQUiTi M devices from any authorised networked workstation.
According to CSD’s Charlie Stokes, typically there are a number of different methods installers use to carry remote access control communications on big sites.
“You can use RS-485, fibre links or convert Concept LAN to Ethernet. This gives us the flexibility to get security systems into a building in multiple ways,” Stokes explains.
“Of course, as soon as you start talking about Ethernet you are talking about getting onto an organisation’s networks and then you are vulnerable to someone putting other devices on links, pinching IP addresses, IP address conflicts, routers being turned off, blackouts, poorly managed networks.”
And with UBiQUiTi there’s no need for expensive trenching? I ask.
“There’s no trenching,” Stokes laughs. “Trenching is expensive, cutting concrete is expensive and in most cases if you’re bringing in a single building then trenching can be cost prohibitive. Users will often resort to installing 2 separate solutions and having them report as 2 separate sites just to get around the challenges. With UBiQUiTi you have the ability to bring that remote building onto a central system.”

“Users will often resort to installing 2 separate solutions and having them report as 2 separate sites just to get around the challenges. With UBiQUiTi you have the ability to bring that remote building onto a central system”

It sounds great to be able to eliminate the expense of cabling and trenching on campus style sites, I comment, turning the tidy housings over in my hands.
“Yes, this solution is really solving problems,” Stokes agrees. “As soon as you say to somebody I’m going to have to cut up the road, carpark, trench through the park, it’s just so expensive and time consuming. The trench has to be dug, the conduit pulled and laid. It might take 2 or 3 days to do the trenching and cabling, then another day on the install and another day on programming. With UBiQUiTi you could complete the job in 2 days instead of a week.”
How’s does all this work? As Stokes demonstrates, it’s far simpler than you’d think.
“What we have done is taken the Concept Lan Over Ethernet module (CLOE) device and instead of using a client’s network we used UBiQUiTi radios point-to-multipoint, running on 12V DC which we power from the Concept board,” Stokes explains.
“With most radios you are talking about running them on 24-48V but these units will run down to 10V DC and that means we can power them off Concept power supplies with passive PoE – they only draw about 275mA. Our controllers are 12V battery-backed so whatever happens to a network does not matter. These links will never go down.
“Stations can be 80m away from the controller and each access point has the capability to have 300 UBiQUiTi stations supporting 300 Concept boards connected to it. This keeps communications safely in the Concept domain.”
What’s the setup from the installer’s point of view? How difficult is this solution to configure?
“One of the great things about UBiQUiTi is the ease of setup and the distances that you get,” Stokes explains. “It’s point-to-point, or point-to-multi-point and line-of-sight with ranges of 1000 or 2000 metres. Both the NanoStations are IP65-rated and we often put them into plastic enclosures for additional protection and to hide them from view and give them a bit of extra weather protection.”
We look at one radio capable of going 1000m (45-degree spread) and another with 3dB higher signal capable of going 2000m (30-degree spread). The smaller one is $A100, the larger is $130. There are other products on the market but this is much more affordable. It’s amazing performance for the money, I think to myself.
The UBiQUiTi range goes right up to the powerful Rocket, which is a separate antenna with a radio that clips on and 2 antenna cables. This gives a range of 2000m at 120 degrees allowing installers to fit more buildings into the wireless comms path. CSD is also carrying UBiQUiTi’s 13dBi 360-degree antenna that can be placed in the middle of a campus and gives 360 degree coverage with a diameter of 1000m.

Programming UBiQUiTi modules is straightforward and takes no time at all. These units are both transmitter and receiver and are capable of being stations or access points so once you install the hardware you can use the airControl software to configure them as you choose. And according to Stokes, commissioning is simple.
“One of the best things about this technology is how easy it is to set these up on a network,” he explains. “You put up your Access point and configure that, and once that’s done all the UBiQUiTi stations find that Access point automatically.
“You then say to the client station, this is user name and password and lock it down to the access point MAC address so it won’t talk to anything else. Setting up an access point takes about 5 minutes and it’s less than a minute to get the remote stations to connect to it.
“They have a default IP address and user name and password on the box and ready to go,” says Stokes. “You configure the laptop with a static IP address so it can talk to the IP address of the device, then set them up to be an Access point or a Station.
“The web server is in the device – as soon as you open the software it comes up requesting the user name and password and you can then log in and change settings, download diagnostic tools including speed test tools, signal strength tools, it can analyse what radio frequencies are in the air, if there’s any interference.
When it comes to Concept system monitoring, if links do go down the system’s modules drop off-line and there’s a report to the monitoring station or monitoring software – same as RS-485 or fibre.
“Another of the cool things about the UBiQUiTi is a software package called airControl which all the devices report back to and as soon as you have any problems it will send an email out and alert you to issues. “All the airMax devices report status to the airControl server and this passes on issues to nominated email addresses. You can also program each device during airControl commissioning with a GPS location so that when a link goes down the software will display the location on Google maps.”
Then there’s airView, a diagnostic software package that uses the antenna inside a NanoStation to scan the air and see how noisy it is. airView offers installers an advanced spectrum analyser capability able to give waterfall, waveform and real time spectral views of the RF signature of a location. This allows installers to minimise interference so as to ensure reliability and performance.
UBiQUiTi from CSD is an excellent extension to the networking capabilities of Concept systems. It allows remote modules to report to central controllers at minimum cost over serious distances using proven TDMA wireless technology. Getting across a carpark, a sterile production line or a busy retail floor has never been this easy – nor so affordable.

“It might take 2 or 3 days to do the trenching and cabling, then another day on the install and another day on programming. With UBiQUiTi you could complete the job in 2 days instead of a week”