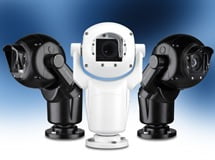 PLYMOUTH-based Outersight (UK) Ltd specialises in designing wildlife observation systems for remote and hazardous locations. Managing director, Peter Barlow has been working with the SSC for more than 10 years and designed the centre’s surveillance infrastructure.
The SSC is one of the most popular visitor attractions in Scotland, winning many awards, and is a world leader in the use of remote cameras to observe wildlife, which includes Sea Eagles, Gannets, Puffins and Grey Seals.
Visitors to the centre view footage on large screens and can actually move any of the 10 live cameras using a joystick, which controls the pan and tilt of the camera and can be used to zoom in and out. This ensures they are always looking at something they find interesting. All focus and iris functions are carried out automatically by the MIC Series cameras, which do an excellent job of optimising the picture. Web feeds are also available 24/7 via the SSC website.
MIC Series cameras are renowned for their rugged design and durability which is imperative for such remote locations, as Barlow explains: “Many of the camera locations are not accessible during breeding season, or on cliff faces that would require specialist climbing equipment to reach in the event of a camera failure. As the SSC is a charity, all expenditure has to be funded by donations or visitor ticket sales so minimising the cost of maintenance is essential.”
The cameras are subjected to gusting winds in excess of 100mph, waves, sand and corrosion from sea spray but, as Barlow says, “The MIC Series cameras cope with all these tough environmental conditions impeccably.”
Ensuring the birds are not disturbed by the cameras is of paramount importance.
“The brushless design means there is very little noise from the camera as it moves, so birds are happy to nest nearby and visitors get as ‘up close and personal’ as possible,” he says.
The first MIC Series camera was installed on the Isle of May with video signals relayed via a fibre optic cable and analogue microwave link back to the SSC. Following the successful trial, cameras were upgraded on Bass Rock a year later and then another MIC camera was installed on the Scope Deck at SSC. Six more MIC Series 400 cameras were installed over the years, in various remote locations, the latest this year.
The compact design of the MIC Series cameras limits wind resistance, which in turn reduces vibration at high zoom ratios according to Barlow.
“The cameras’ smooth, rounded design means they are very bird friendly and with a small amount of camouflage paint they blend well into their beautiful surroundings and are barely visible from a distance. We naturally want to cause as little disruption as possible.”
MIC Series cameras feature full 360° continuous rotation and 320° tilt control to give SSC visitors a complete view. A toughened optically flat window and integrated wiper ensure the perfect image whatever the conditions. With their industry leading IP68 rating the MIC Series cameras are more than equipped to deal with the harsh Scottish coastal environment.

The brushless design means there is very little noise from the camera as it moves, so birds are happy to nest nearby and visitors get up as close and personal as possible.