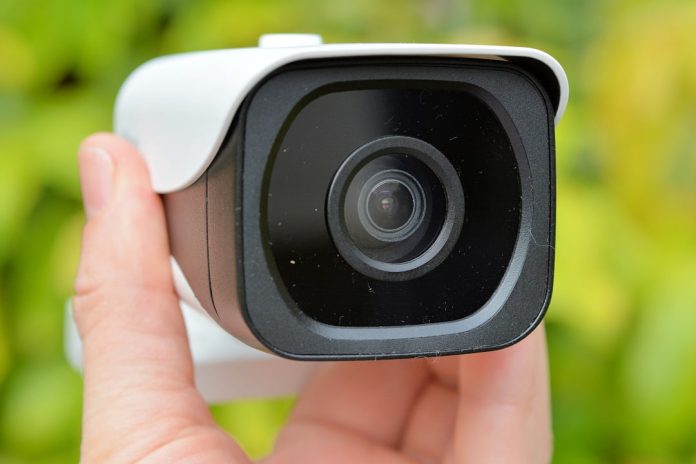 Dahua’s Dahua IPC-HFW4800EP 4K bullet camera, distributed locally by Seadan, proves good things do come in small packages. We like 4K at SEN and this PoE IP66-rated bullet, with its 4mm lens and IR support, proved to be a super little camera.

IF I hadn’t got a sneak preview of Dahua’s 4K box camera from the boys at Seadan before doing this review, I might have argued the IPC-HFW4800EP was the best camera in Dahua’s range for daylight performance. In terms of colour rendition, sharpness, acuity, lack of distortion, lack of CAs, lack of noise, lack rebuild artefacts, it’s a very well-balanced camera.

Let’s take a look at some specifications before we get into performance. The 4800EP has a maximum main stream frame rate of 15fps @ 4K (3840 x 2160 pixels), it’s 25/30 at 1080P, and the bitrate for H.264 streams is adjustable from 20K~16Mbps. I tend to think that 15ips means movement is not seamless but plenty of end users favour this frame rate and after spending an afternoon with the camera I found that for typical applications like face recognition and number plate recognition, 15ips was fine. 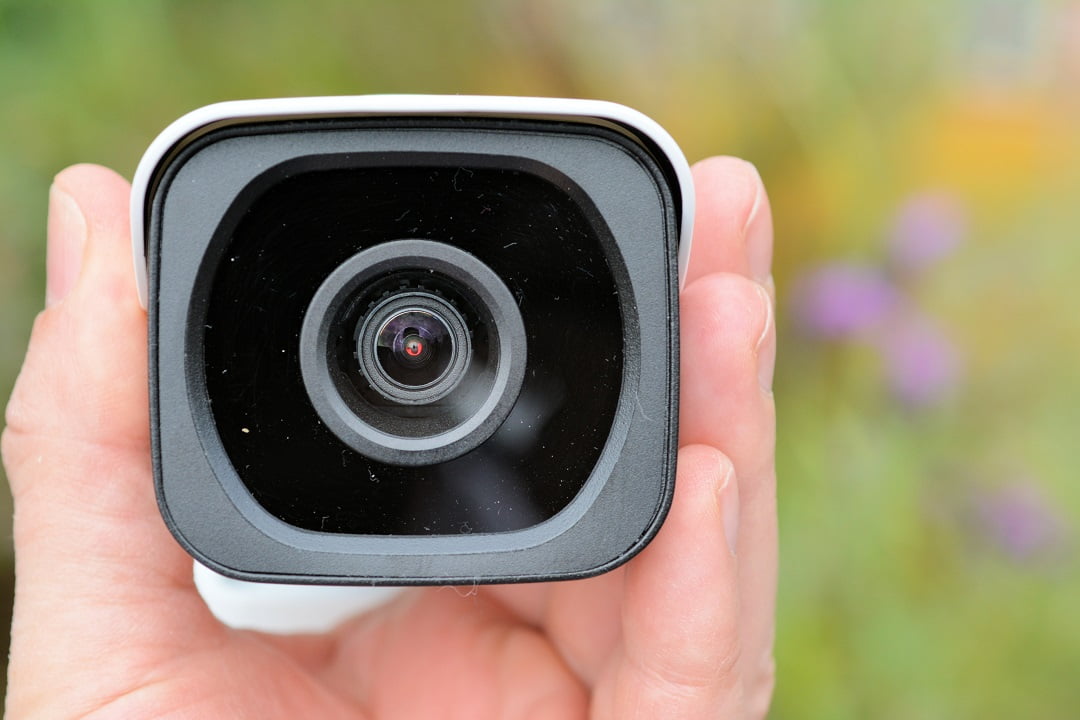 The form factor of the 4800EP is a bullet with a poly sunshade. The camera is PoE, IP66-rated, features a ½.3-inch progressive scan CMOS and offers H.264/MJPEG and dual-stream encoding. There’s also 30m IR range from integrated IR LEDs. Other camera features include Day/Night, auto ICR, backlight compensation, digital WDR, auto or manual white balance and gain control. There’s Dahua’s 3D noise reduction, privacy masking of up to 4 areas, electronic shutter speed is auto or manual and can be set between 1/3(4)~1/10000s. Minimum scene illumination is claimed to be 0.1 Lux/F1.6 in colour and 0 Lux at F1.6 in monochrome with IR on. Signal to noise ratio is good at more than 50dB.

The manual focus f1.6 lens is fixed at 4mm giving an 80-degree angle of view. A fixed lens might be seen as a weakness in a camera that did not have this much resolution and there may be some applications where the shorter or longer focal length potentials of a varifocal lens might be preferable. But the simplicity of the element equation of this fixed 4mm lens goes some way to explaining why it has such fine performance. Covered by a clear window, the lens proper has a red Magnesium Fluoride coating targeting the 550nm centre of the visible spectrum so as to provide resistance to flare and ghosting. 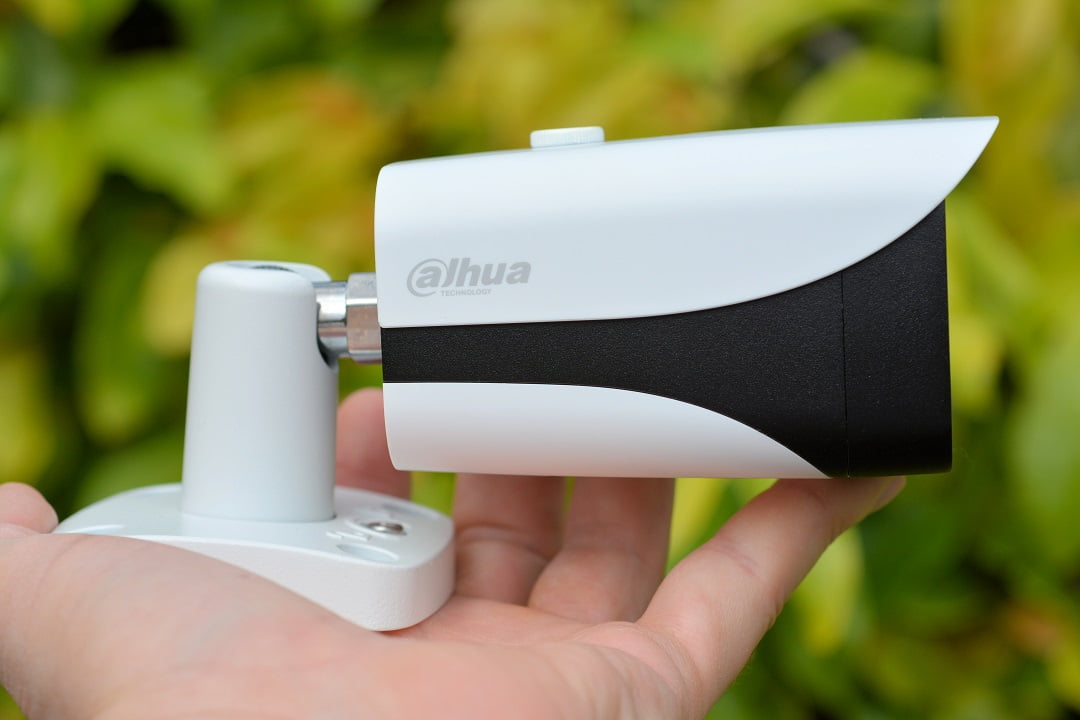 Power consumption is 7.5W, operating temperature is solid at -30 to 60C, dimensions are compact at just 178.4mm x 70mm x 69.9mm, while weight is 528 grams. This is a small camera but it feels extremely well made in the hand thanks to its metal body and mounting bracket. There’s an integrated RJ-45 and power lead emerging from the bracket. Everything about the 4800EP seems well stitched together. It’s not a complicated build. There’s only one adjustable external setting on the camera body.

The first impressions you get with this camera are its strong resolution, excellent colour rendition and surprisingly low latency. I start off my test out the back and find that when faced with extreme backlight – and by that I mean with the sun in the frame – the 4800EP compensates by muting colours. This is normal for many high resolution IP cameras. As soon as I push the lens away from the sun, the colours fill in. It’s a quite neutral sensor – not too warm, not too cool.

The other things I notice – especially once I go to full screen – are a comparative lack of barrel distortion and low levels of chromatic aberration. Yes, there is barrel distortion – it’s a 4mm lens after all – but it’s very well controlled. I prefer 4-5mm on the street to extreme wide angles, such as 2.8mm. Without pointing the camera at a test sheet I think distortion is probably 8-9 per cent, which is exceptionally good for a compact bullet camera like this one. 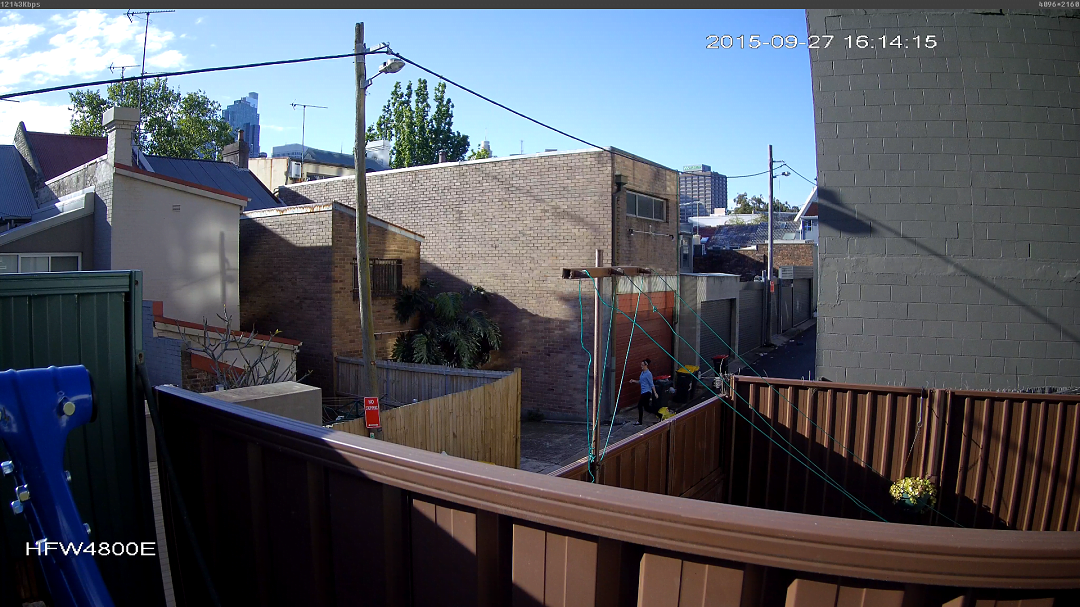 Great performance in this district view.

Chromatic aberration is very mild in areas of high contrast – I have to go looking for it. This suggests the simple fixed lens of the 4800EP is focusing all wavelengths in nearly the same plane. Lack of CAs improves contrast and detail and that’s a desirable feature in any camera. I also notice when I’m out the back in very bright sun – 70,000 lux or so – that the camera shows no sign of flare and I see no ghosts at any time, day or night.

When I take the camera out front of the office and point it up the street, what’s most noticeable is the high level of detail even at this comparatively wide 4mm focal length. If this was a 1080p camera there’s no chance I’d leave it at 4mm out here but spreading pixels is not an issue. We’ve said it before and here it is again – 4K is sensational when it comes to detail. Given appropriate light levels, 1080p cannot compare with it. This little Dahua 4K is better than any 1080p camera I’ve tested in terms of its ability to give admissible evidence in daylight hours.

Something else I notice as the afternoon wears away, is that there’s a division between the shaded side of the street and the sunny side. This is a challenging scene in that regard and I have the camera settings at default. Later on, when I take the camera out the back as the sun is sinking further, the scene gets darker than I’d like. At this point I make some adjustments to brightness (60 per cent), contrast (55 per cent) and saturation (55 per cent). All my other settings are default – profile is set to day, day/night is set to auto, 3D NR is on with levels at default.

With my new settings the image in these lower light levels is excellent in the foreground, though I lose the blue of the sky. Whether you’d have a group of settings that were applied after hours is something the installer would need to consider. Dahua’s SmartPSS software certainly allows this. Importantly, the adjustments I make are tiny but the difference they make is enormous – especially going to 60 per cent with brightness.

As the sun sinks, the 4800EP and I go through that lovely period of best-seeing for an IP camera – not so much light that the camera starts to over compensate, not so little light the scene gets dark, or suffers amplification noise as ISO winds up. When I break out my Sekonic to check, I measure light levels at around 4000 lux. 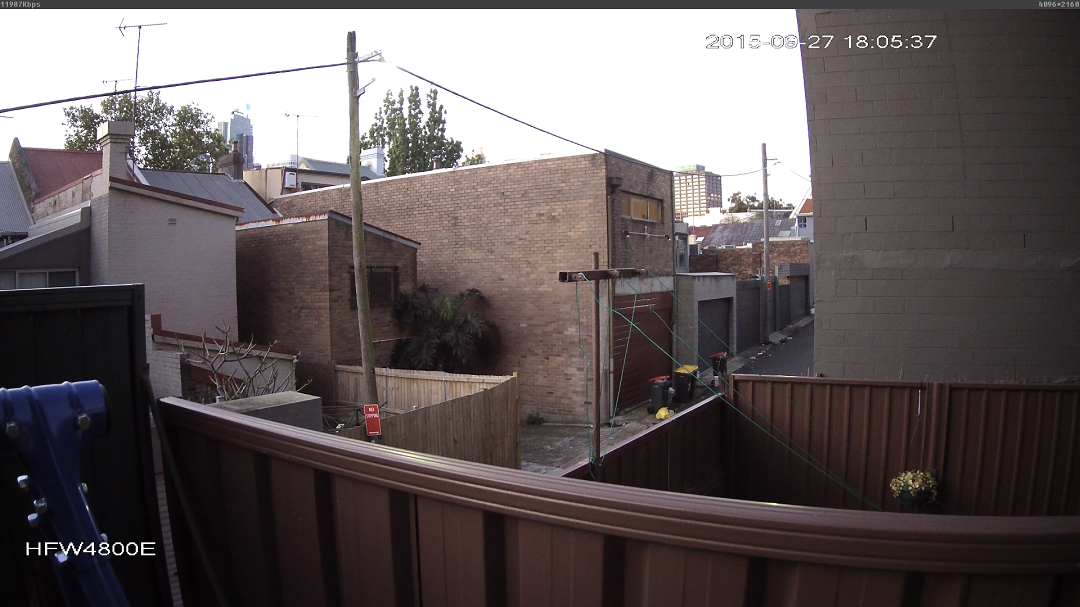 At 6.05pm and at 10 lux at the lens, I get up and go look out the back window because even though the days are getting longer again, the little Dahua camera is starting to surprise me. “It’s got IR for a reason, right?” I catch myself saying. Ten minutes later it’s 6 lux at the lens and there is now some noise and some smoothing creeping in and robbing detail and I can see blooming around the streetlight which is in the frame. Regardless, for all practical purposes, it’s a bright image and I’m now very interested in what’s going to come next. 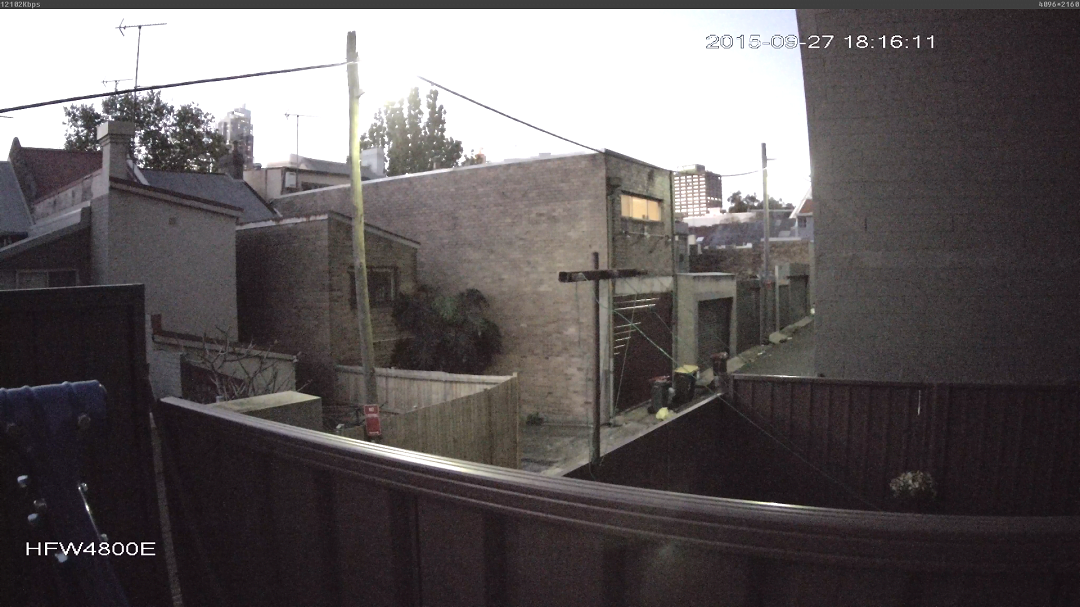 At 6.20pm, the 4800EP flicks over to monochrome and the IR comes on. I measure light at around 2-3 lux. IR range seems good and in monochrome I lose a lot of the noise that had started to impact on scene quality in colour. In another 10 minutes I’m measuring less than 1 lux at the lens but the image doesn’t alter. For a 4K bullet camera, performance in sub-1 lux in the back lane is good. You are not going to get any measure of face recognition deeper than 10m perhaps, but you’ll have situational awareness. 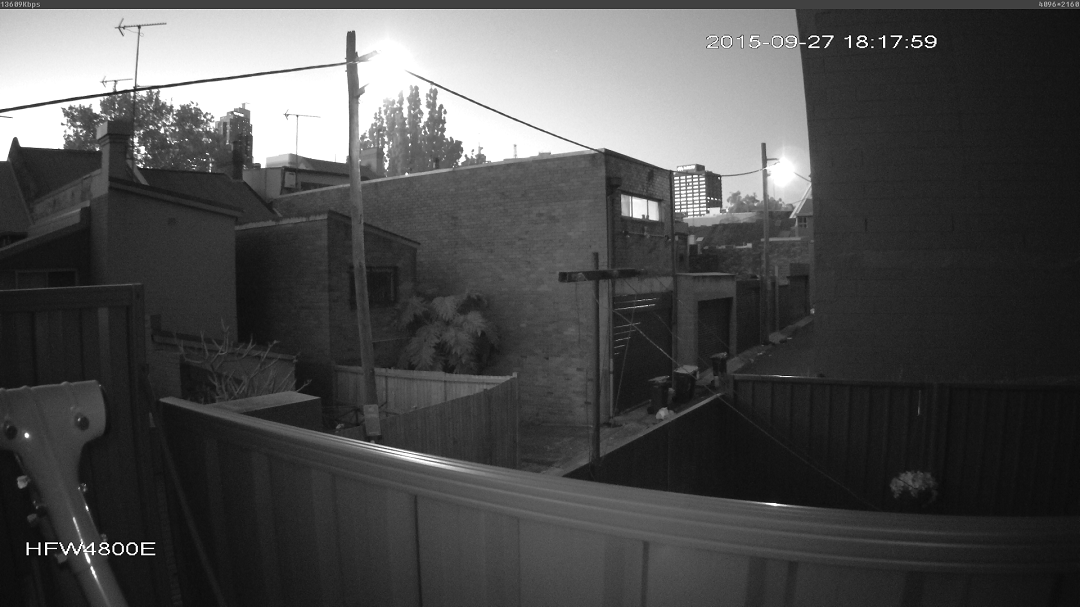 Taking the 4800EP out the front, performance is improved but it’s still typically challenging for a 4K camera in low light, even with IR on. You’re getting situational awareness out to about 12m but beyond this faces and fine details become less distinct, which is typical for a compact camera with integrated IR. There’s also typical IR flare from faces. When I run Norman up and down the street I get good detail of the target and some face recognition closer in, but not further out. I take Norman out to about 18m from the lens but there’s no point going further than this. 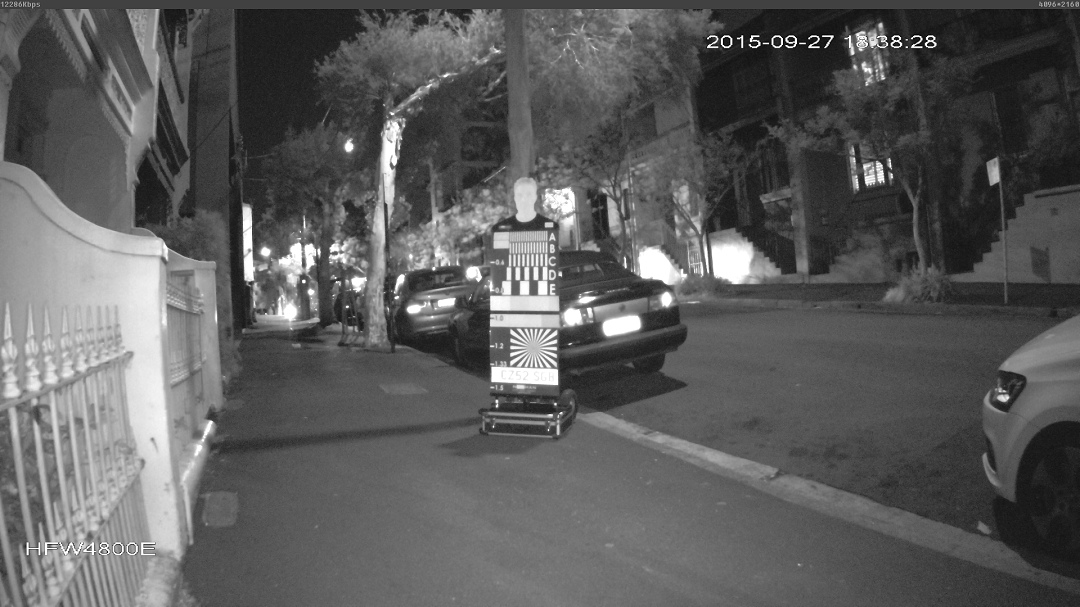 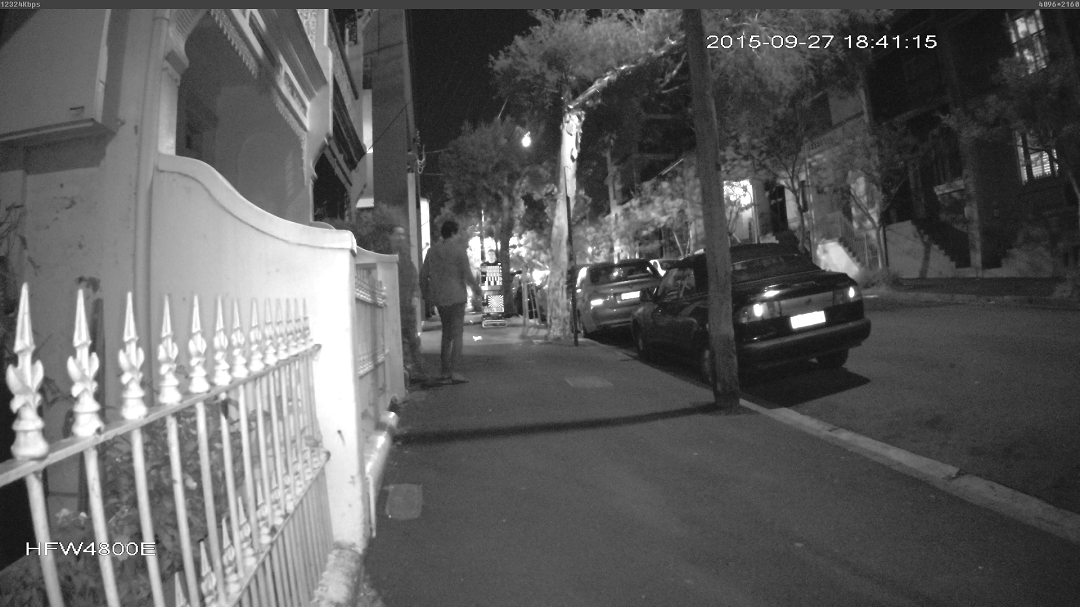 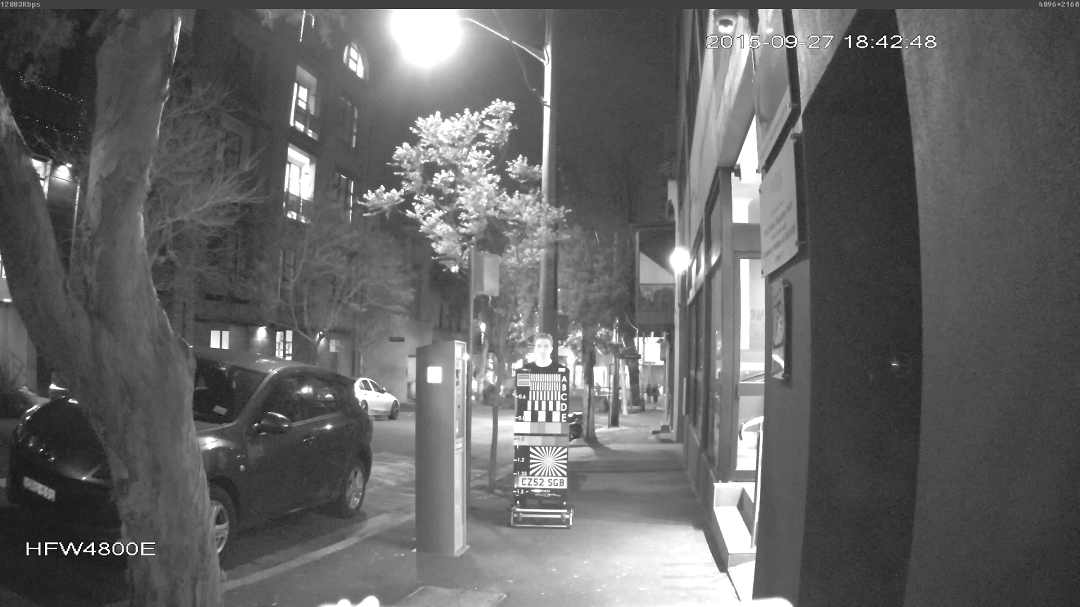 Flare from Norman’s face but situational awareness remains useful deep into the scene.

Later on, I test the camera inside the office with IR on and again I’m getting perfect situational awareness but I can’t get face recognition. This may relate to Norman’s shiny poly coating – no matter which way I turn Norman, I still get flare. This is typical of an IR array integrated into a camera. You really need an oblique angle to get best performance from IR. 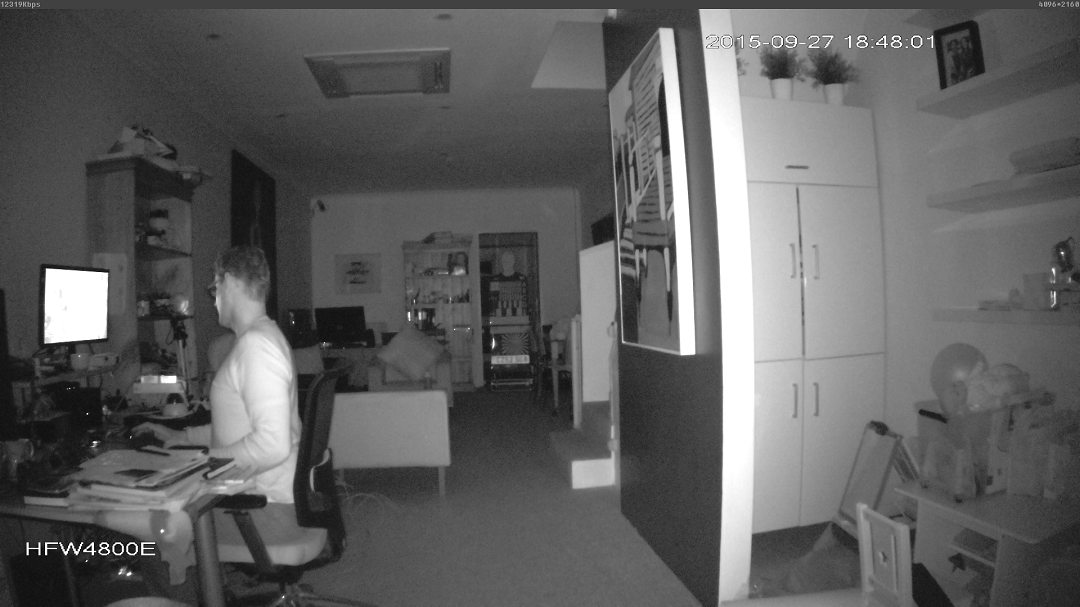 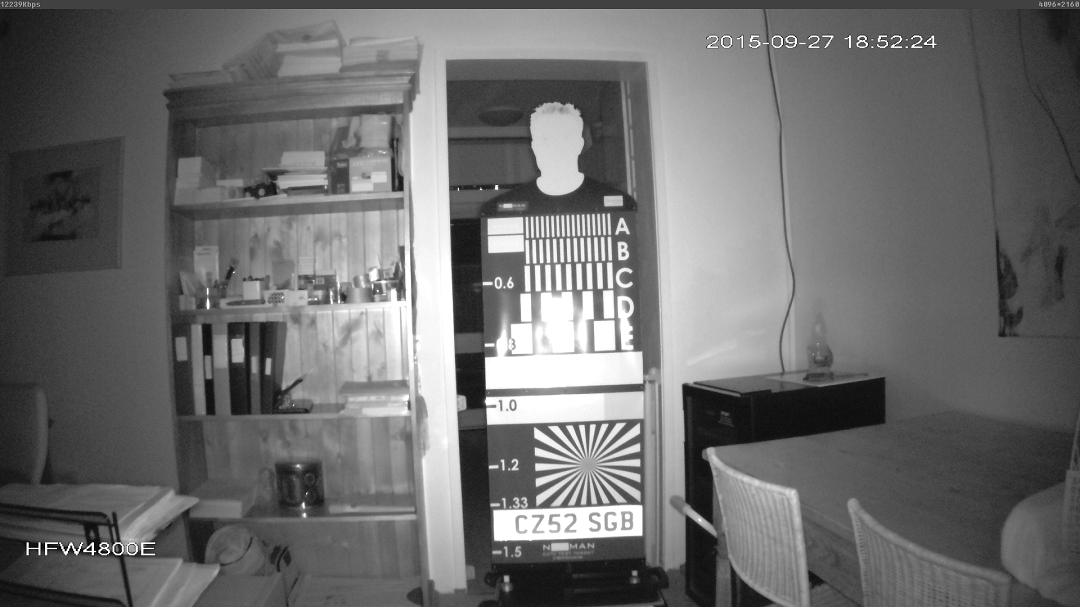 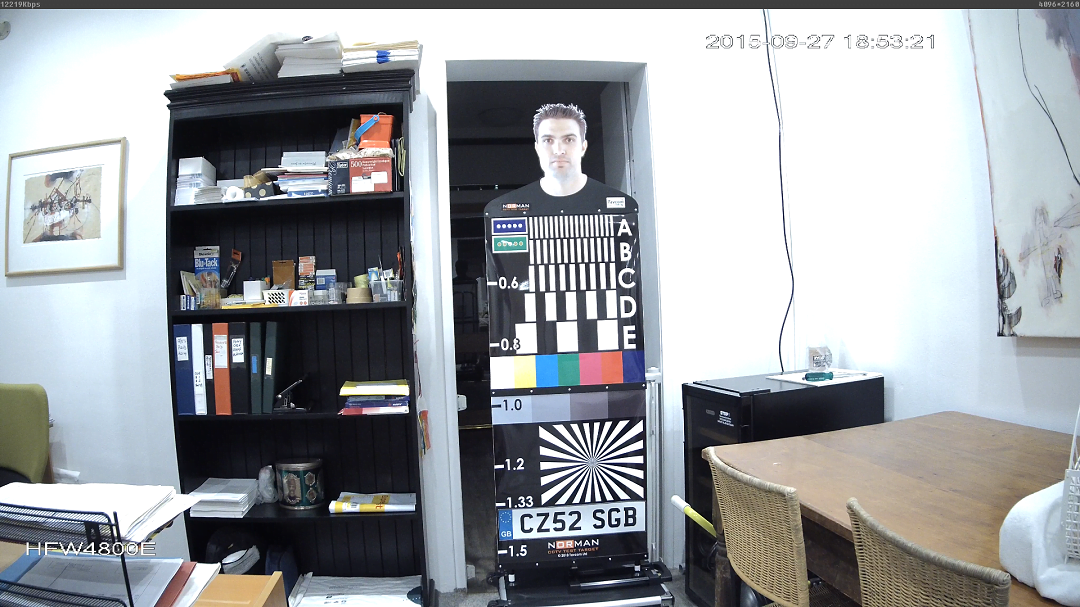 Inside the office with IR on and with lights on…

Next day, I take Norman out the front and we go through the business of testing performance at 8m, 12m and then about 20m in this busy, variable street scene, with its shadows and harsh sunlight. The IPC-HFW4800EP is seriously impressive out here. Its high resolution and excellent colour rendition, combined with that neat little 4mm lens make the 4800EP a great performer. 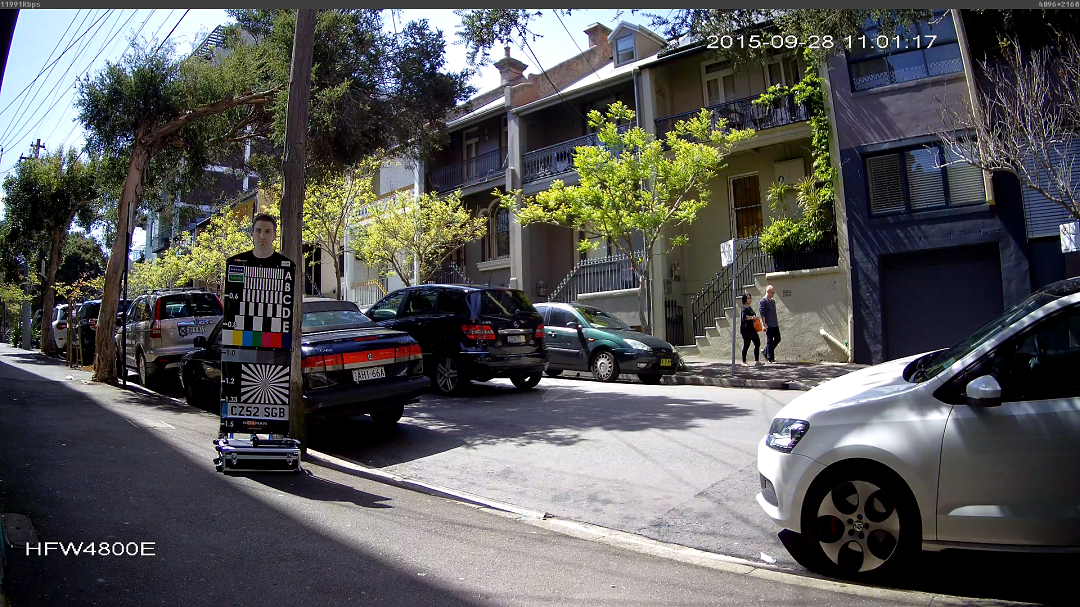 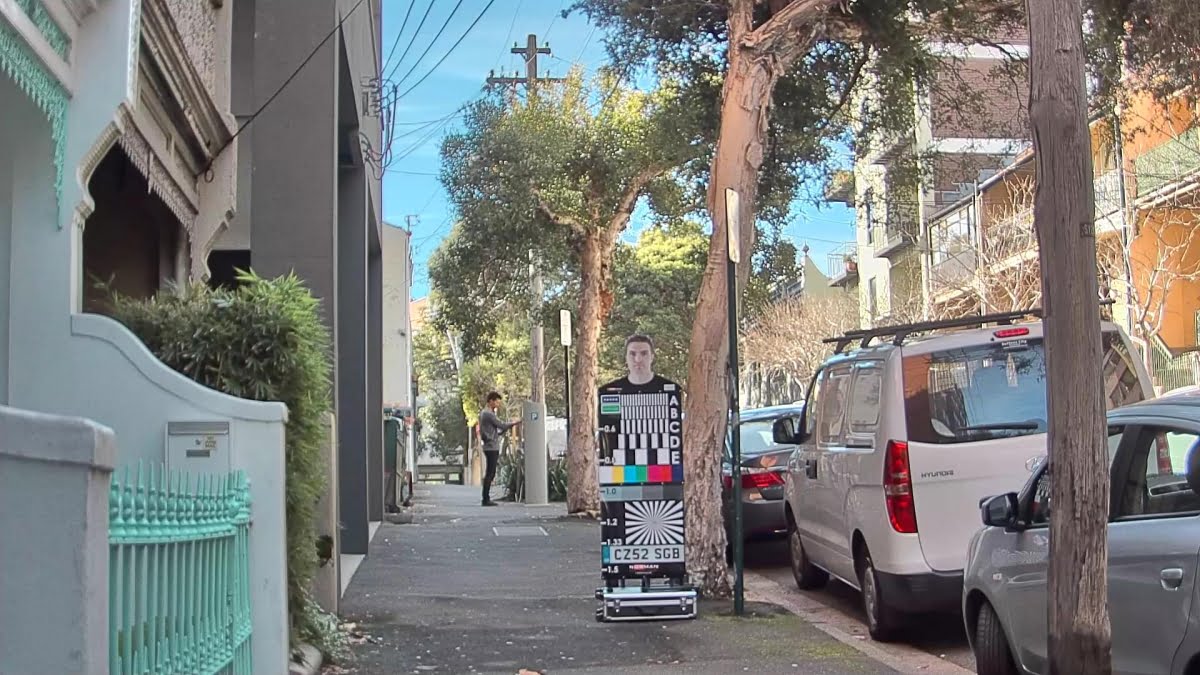 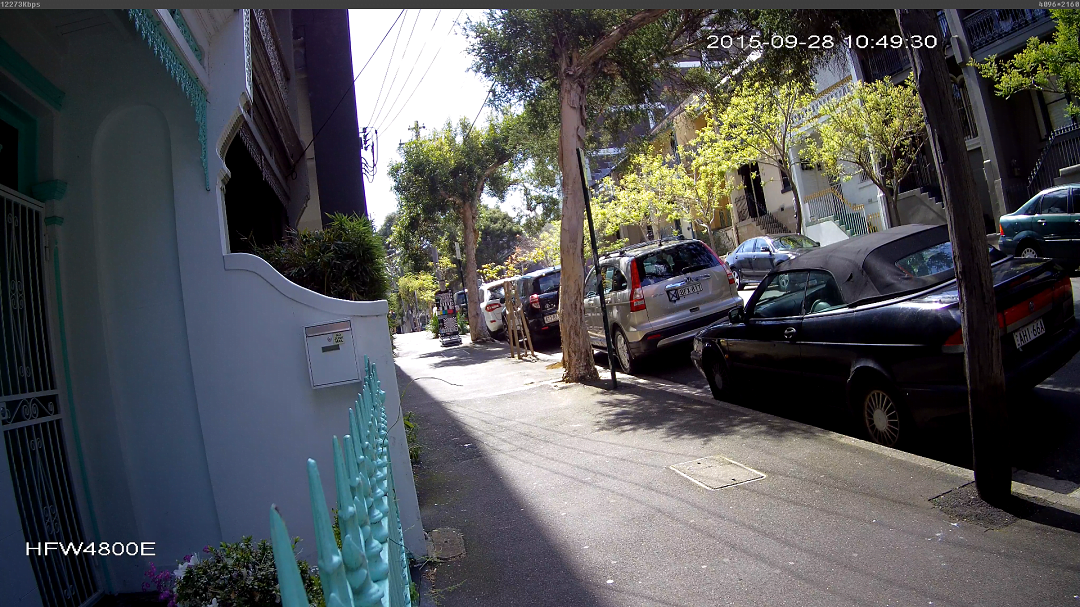 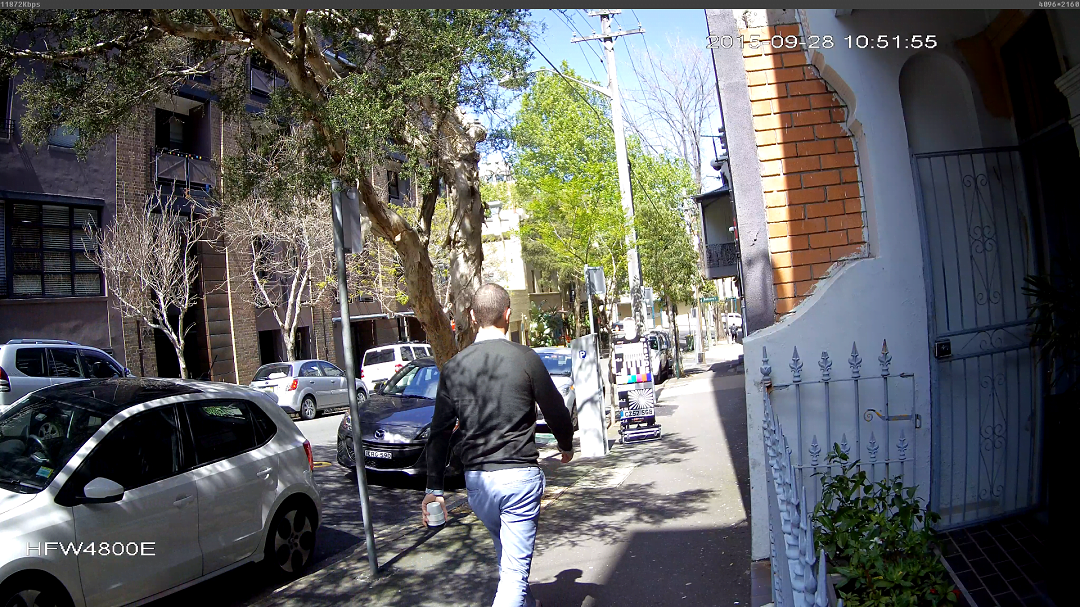 Outside in good light is this camera’s forte. It’s the best compact bullet we’ve tested in this regard. Annoyingly, the images as rendered by SEN’s website template are cramped when compared to the original grabs.

While we are out here I pay special attention to latency – I judge this to be about 200-300ths of a second, which is very good. There are plenty of 1080p cameras on the market with latencies of well over half a second and some are close to 1 second. The other thing I take a look at is motion blur – I’m interested because the 15ips frame rate renders fast moving vehicles in steps and viewing a monitor live it’s hard to tell if there’s blur being registered in recorded images. However, I find the little Dahua to be exceptionally good in this regard, too. In a number of my snapshots I deliberately include cars and pedestrians and the 4800EP has no trouble with blur whatever. I’m able to jag license plates of cars doing at least 60kmph. 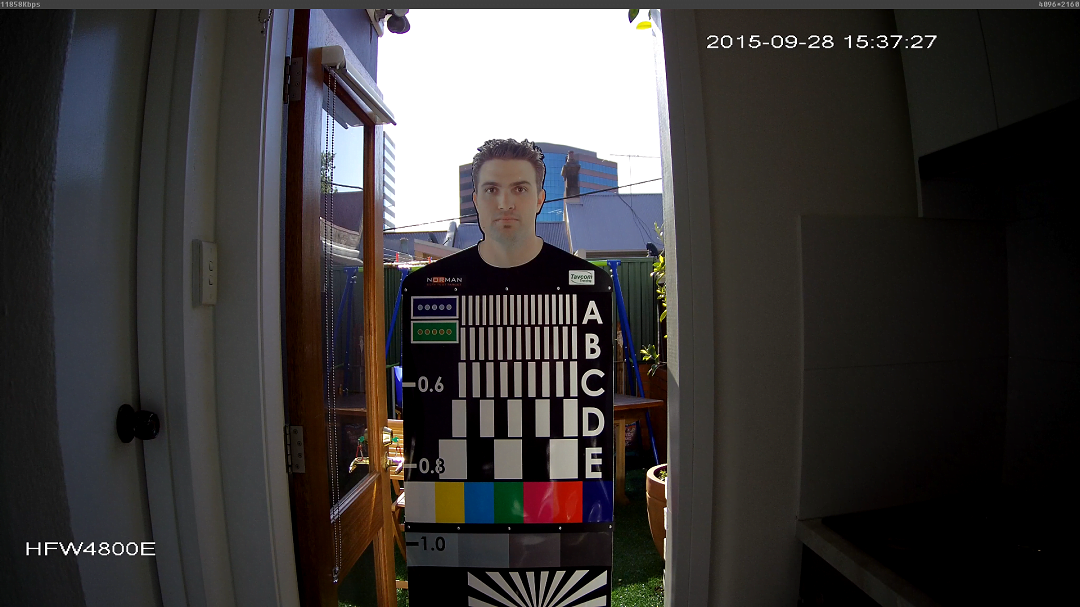 Strong WDR performance in more than 70,000 lux of backlight.

Overall, this is a fine camera. Low light performance is not as strong as daytime performance but the camera’s 30m IR allows useful situational awareness deep into low light scenes. When compared to the performance of IR-supported 1080p compact bullet cameras, the Dahua performs better at night not just close in but in terms of depth of field. During the day, the image from the 4800EP is a revelation. We’ve not tested a compact bullet camera that comes close to it for image quality.

Features of Dahua IPC-HFW4800EP include: