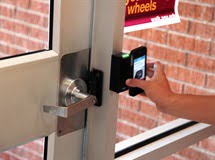 ARIZONA State University (ASU) is committed to the ongoing use and management of advanced technology, including solutions that optimize security and convenience for students, faculty and staff. In August 2011, the university launched a ground-breaking project to evaluate the benefits of moving its student housing keys onto NFC smartphones.

HID Global’s iCLASS SE platform is based on a new, standards-based,

technology-independent and flexible data structure that significantly improves security, portability and performance. It also extends physical access control beyond traditional physical cards and readers to enable the deployment of digital keys and secure identity credentials on smartphones and other devices.

Initial feedback from the ASU pilot project has been very positive. Participants report that, while they have often left their rooms without their keys and Sun Card campus IDs, they never forget their phones. Carrying their Sun Card credentials inside their NFC smartphones gives them confidence that they can always get back into their residence hall or room.

A leading innovator and long-time user of iCLASS access control credentials, ASU organizes on-campus housing for approximately 13,000 students living in residence halls across four campuses. The university first adopted iCLASS technology for its Sun Cards in 2004 as part of a major safety and security initiative that was initially focused on ASU’s labs and other sensitive spaces.

The initiative was extended over the years to include residential areas with a focus on student safety and security. Today, students, faculty and staff carry a Sun Card for secure access to a variety of facilities. The university also was familiar with NFC technology and could envision providing services similar to its Sun Cards in smartphones.

“When I first saw this technology used in other applications, I recognized the benefits it could bring to a university campus,” says Laura Ploughe, director of business applications and fiscal control, University Business Services, at Arizona State University.

As with any campus housing program, assigning rooms and distributing keys is traditionally a significant endeavor that takes many days and involves a large number of campus staff members and volunteers. Throughout the school year, residential life and facility management also must handle room re-assignments and the tasks of retrieving old keys and issuing new ones.

There also is the matter of lost keys and associated costs. Although Sun Cards make the administrative tasks of key management easier, Sun Card management, too, is onerous. Moving access credentials to the phone seemed easier. ASU was also keenly aware of the role cell phones play in students’ lives.

“Mobile phones are at the heart of campus life and play a major role in facilitating the students’ social connections,” Ploughe says. “We are always looking for ways to help students succeed, and to engage with and deliver services to them in the same manner they engage with each other using their phones and social networks.”

ASU felt the cell phone was an ideal platform for carrying digital residence hall and room keys alongside the device’s other voice, data, memo, music, navigation, camera and game functionality. The university wanted to gain student feedback about the convenience and perceived security of using their smartphones for physical access control. It also wanted to determine the viability of transferring identity to a ubiquitous device that provides secure identity and can also be used for all functions associated with student life around campus.

The 27 students and five staff members participating in the pilot were given NFC smartphones carrying next-generation iCLASS SE technology. To open door locks, pilot participants presented the phones to a door reader just like they do with their existing iCLASS-based Sun Cards.

The embedded NFC short-range wireless communications technology in each of the phones enabled them to exchange access control data between the phones and door locks. All participants used their phones for residence hall access, and some also used them with a unique additional digital key and PIN to open individual room doors. The technology also supports over-the-air provisioning and management of digital keys, which simplifies access control administration.

The underlying technology that makes this all possible is HID Global’s next-generation iCLASS SE access control platform and its SIO data structure. SIOs on the credential side and SIO interpreters on the reader side perform similar functions to traditional cards and readers, with significantly improved security, portability and performance.

SIO technology operates within HID Global’s Trusted Identity Platform (TIP) framework, which is designed to support a secure and trusted boundary for cryptographic key delivery. The TIP framework ensures that SIO digital credentials can be securely provisioned on a variety of credential platforms, including smartphones and other mobile devices, no matter where users are located or how they are connected.

According to Ploughe, the pilot project has proven that a ubiquitous device can converge secure identity credentials and physical access control, and has endorsed the promise that NFC technology holds within the campus environment.

The results from a participant survey included the following highlights the fact almost 79 per cent of respondents reported that using a smartphone to unlock a door is at least as convenient or more convenient than using their existing Sun Card. Meanwhile, 55 per cent reported that the mobile access transactions were at least as fast as using traditional Sun Cards.

Further feedback show 90 per cent of respondents said they would want to use a smartphone to open all doors on the ASU campus and 85 per cent of respondents said they were approached by others who saw them using their smartphones to unlock doors and had questions or comments about the technology. The majority of questions were how and where to get a similar smartphone for themselves, and the majority of comments were about the coolness of the technology.

Nearly all respondents expressed an interest to use their smartphone for other applications including meal, ticket and merchandise purchases, student recreation center access, transit, and other typical Sun Card applications.

The pilot showed that mobile access control delivers benefits to both administrators and the cell phone owner. Lost phones carrying digital keys are more likely to be noticed and reported than physical keys or ID cards. The mobile access control model also streamlines credential distribution and retrieval by enabling remote credential management throughout its lifecycle.

It is also easier to modify applications and security parameters via software downloads and firmware updates, which eliminates the risk of key and/or card copying and simplifies the task of temporarily issuing new keys and cancelling them when lost or stolen.

“We were very impressed with the convenience of putting Sun Card credentials on NFC smartphones, as well as the enhanced security that is delivered by this next-generation of advanced access control system,” Ploughe says.

“This project with HID Global has proven that a ubiquitous device can converge secure identity credentials and physical access control, and has endorsed the promise that NFC technology holds within the campus environment.”

“This project with HID Global has proven that a ubiquitous device can converge secure identity credentials and physical access control, and has endorsed the promise that NFC technology holds within the campus environment”