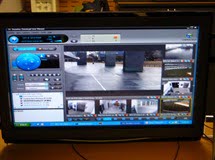 LAST time SE&N went to The G, we took a look at a new access control solution that integrated Genetec’s Synergis access control software and HID’s VertX networked access control solution. This issue we’re taking a look at the integration of the site’s video surveillance system, which involves another component of Genetec’s Security Desk – Omnicast VMS. Genetec’s Security Desk is ideal for the MCG’s task, combining as it does monitoring and reporting for Genetec’s Omnicast IP video surveillance, Synergis IP access control, and Autovu IP License Plate Recognition (LPR) systems within a single interface. As the tour of the huge site goes on I realise this is probably not the last time we’re going to be taking at look at the networked security solution at Melbourne’s iconic stadium. The MCG’s networked security system is a rapidly evolving creature likely to get better and better over time. A combination of factors seems to be at the heart this rapidly evolving system, two key elements being the IP sympatico between the MCG’s manager security and venue support, Andy Frances, and Integrators Australia’s Dean Monaghan. Both are strong believers in networked security systems that are simple yet offer what what might be described as three dimensional expansion.  By 3D expansion, I mean networked solutions that integrate multiple technologies in multiple layers that can be managed by a single front end. At the MCG, the ultimate aims of the new security system are improvements in simplicity and reliability of operation, with an additional driver being increased performance from multiple integrated sub systems. Given these imperatives it’s likely that in the future the MCG will leverage every useful piece of technology budget constraints allow. Just what does the networked video surveillance system at the MCG now comprise? For a start it’s built around a subnet propped up by Cisco ProCurve switchers. Driving the system are servers and clients incorporating Genetec’s Omnicast VMS. Omnicast is a component of Genetec’s Security Desk monitoring and management software, which also comprises the Synergis access control solution and LPR applications. These Genetec solutions allow integration of access alarms and video surveillance inputs, as well as supporting inputs from additional subsystems. The solution also includes a monster IBM storage server sourced and maintained by the MCG’s IT team. It’s important to bear in mind that the MCG had a full analogue surveillance solution before this upgrade began. The system was capable for its day and included high quality analogue Panasonic cameras supported by a big analogue matrix switcher. The matrix was been decommissioned as part of this upgrade but those long lasting Panasonic SD3 cameras are still being used in conjunction with encoders. Along with the analogue component, the MCG has a significant and growing IP camera installation incorporating Axis HD megapixel cameras. There are currently around 50 Axis HD cameras – fixed and PTZ – at the ‘G, with another 40 on order. Ultimately, all cameras at the ground will be IP. All in all it’s been a $A3 million dollar project with the spend based primarily on the surveillance side and including clever investment on good stuff like pre-wiring of future IP cameras, installation of a monster fibre network backbone and the necessary reconstruction of the site’s access control room. But there are other elements to the system that make it stand out. It hustles 75TB of storage to meet its requirements of storing 28 days of real time video on all channels. Work is underway on touch screen operation and mapping that will allow drilling down through multiple systems – CCTV, access control, HVAC, fire control and air conditioning – not just from touch screens in multiple control rooms, but across adjacent networks.And this includes wireless networks. Soon, security officers around the ground will be linked to the system via PDAs like iPads, which will allow them to respond to alarms, operate cameras and access footage sent to them by operators in the control room. There are also plans for the addition of video analysis software to handle things like congestion and, as the technology improves, face recognition. Orchestrating all this is Andy Frances, who by his own admission is no technophile. Interestingly, his non-technical streak merely clarifies his broad vision of what he wants from the solution at the MCG. You don’t need to spend much time with Frances to realise that the man’s greatest strength is operations – and far from being an incumberance, this focus on ops is a real advantage to all concerned. Instead of getting tangled up in the whys and wherefores of the various systems and technologies at work, Frances has a clear idea of what he wants the MCG’s networked security system to do – to enhance the capability and efficiency of his security staff while keeping manpower requirements and overheads to a minimum and future potential technological expansions to a maximum.

“We have rewired the stadium with a complete fibre ring, with fibres running to network switches at central points and Cat-5 drop cables carried directly to our new IP cameras, as well as to those analogue cameras we think will fail in the next few years”

After taking on the role 3-and-a-half years ago, Frances quickly realised the key to the MCG’s electronic security future would be an open architecture networked solution. But he saw that successful implementation of such a system would not only require choosing the right hardware and software. It would also mean close co-operation with the MCG’s IT department, as well as the selection of an integrator capable of working in a networked environment. The first and most important task was to undertake a complete review of the security operations at the MCG so a system could be designed that met current and future needs in the most secure, efficient and affordable way. “Since joining the MCG I have looked at everything from manning levels to counter terrorism preparedness, and from CCTV, access control and networked infrastructure, to integration of building management,” Frances says. “Throughout that time we have been on a strategic path to upgrade and enhance our CCTV and access control systems and as a result of the review process we made a very early decision that we were going to go to an IP-based solution,” Frances explains.

As mentioned already, the surveillance system is fully integrated with the access control via Genetec’s powerful Security Desk application and we spend time in the Security Control Room getting a look at the system in operation. Frances says that the design of the new Security Control Room was carefully planned. “The distances between the screens and the operators are designed to meet OH&S and to give best vision to operators,” he explains. “And the 4 screens over the back of the desk are touch screens. The plan is that our 3D schematics will go on these screens and the guys will be able to operate them without the need for a mouse. “Everything they need to do will be managed by touching a screen, including selecting a room, touching on a room to access drop down menus and selecting drop down menus that allow operators to change the temperature, show smoke sensor status – as well as control all the cameras in the room. “It goes pretty much without saying that we had a clunky system previously – the cameras were all numbered which was fine until you started to expand the system and then the numbering was impossibly confusing,” Frances says. “By the end, only the guards who had been here for many years really grasped the layout of the system from a control room perspective – and that’s vitally important when operators need to do things in a hurry.”“Using the Omnicast software we are in the process of designing three dimensional touchscreen multilayered schematics allowing us to drill down into a room visually,” explains Frances.

“We have a policy that we are moving away from the fixed cameras unless it’s an area that is subject to slips and falls. We get much better use out of PTZs – they just make more sense for us

The importance of the enhanced surveillance system to the MCG is immediately obvious. This is Australia’s premier sporting venue. With a maximum capacity of 100,000 and a regular turn-out to Friday Night Football of 65,000, this is a huge venue with serious surveillance needs. It’s also a site that will benefit from powerful integration between subsystems.Talking with Andy Frances, it’s obvious he’s pleased as punch – not just with the solution he’s chosen but with the team that successfully put it together. No major networked application, especially one involving bucketloads of live video on hundreds of inputs, is easy to put together. Behind the scenes some very dedicated people have worked hard to get this impressive solution right. “I’m very happy with the system and with the way it has come together,” Frances says. “Importantly from my perspective, our IT department is excited about the system. It was a little unexpected but they truly got excited by the scope of our surveillance solution. “You need to consider that before we began the CCTV installation, the storage for the entire site was only 5TB,” Frances explains. “When I told them I needed 70TB they were so excited you couldn’t believe it. And they were happy to go and speak to IBM and Cisco about the powerful new gear. The IT team are delighted with the system. They are completely involved with it. In fact, I think they love how demanding the video is. “On the installation side we are very happy with Integrators Australia. We were lucky to find Dean. We do a lot of work together. It’s good for us as we trust him, his advice is honest and he has saved us a lot of money,” Frances says. “Along with this, the quality of the installation work is exceptional. We would not have been able to do the job we’ve done without Integrators Australia.”Frances says Genetec has also been instrumental in the success of the system.“We’ve tweaked this system to offer maximum performance and Genetec has been very good at listening to our issues and responding with the next update,” he explains. “In the last 2 updates we have seen things we have asked to be updated responded to and improved – it’s one of the things I like about Genetec – they are very responsive to the feedback they get from their clients.”Most important of all, Frances thinks it won’t be long before he has the best networked security solution on Earth. “I’ve seen a few stadiums around the world – including big stadiums in the U.S. and none come close to the sort of thing we have planned for the MCG in the next 12 months. If you think of the MCG purely as a business I think it’s fair to say that we are 4-5 years ahead of our competitors – and that’s a good place to be.”

“As far as the future is concerned, ultimately we are looking for technology that will assist us in maximising our security performance with low manning levels – particularly on event days”