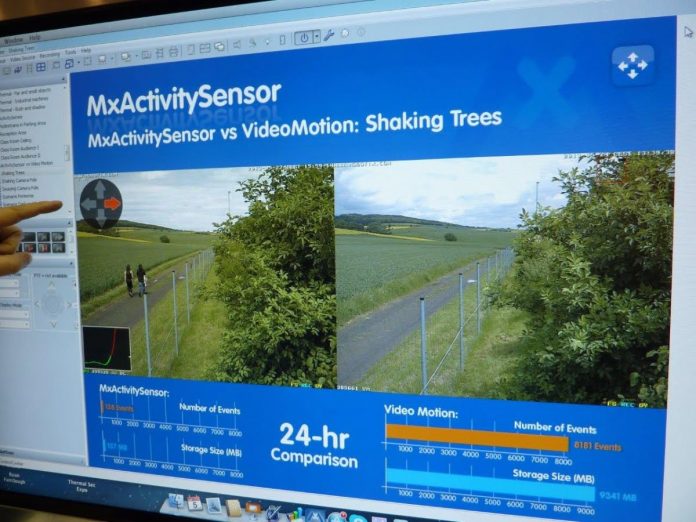 Mobotix’ MxActivity Sensor scored SEN’s Best Product CCTV at Security 2014 in Melbourne. Given the prevalence of analytics at the show this is not surprising but it wasn’t only MxActivity sensor functions that grabbed my attention.

IN fact, when I walked onto the Mobotix stand, the first thing the boys showed me was the M15-D, which I’d seen already at Mobotix’ conference earlier in the year. It was only later on when I started thinking about it, that I realised Mobotix was really onto something with its optical and thermal-powered MxActivity sensor.

We all know that storage and bandwidth are an issue with high quality video streams. And we all know these 2 issues have a detrimental impact on systems in the real world. Hands up everyone who has installed a 1080p camera that records at 720p or less, and that although it pumps out multiple video streams in 30ips (it’s 60ips when you’re talking the latest Sony, Panasonic, Bosch and Hikvision cameras), is choked to just 6-15ips?

I’ve seen a number of applications over the last 18 months that are limited in this way. Given most CCTV systems drive on dedicated subnets, it’s not so much bandwidth that’s the issue here. Instead it comes down to the storage equation. Firstly, how much is a client prepared to spend on dedicated network storage for their CCTV system, and secondly, how long do they want to retain footage on all channels? For most applications, it’s 30 days.

The result is the sum of an equation that has nothing to do with performance and everything to do with fiscal expedience. The material point of such an application is this. If a camera is not viewed live and not recorded at full resolution and frame rate, then there’s no point installing 1080p x 60ips at all.

The answer is to only record when there’s verified movement of an object you want to record – let’s say you only want to record people and vehicles – and when you do record, to use the full power of your hardware to give the best possible material to support a subsequent investigation. Yes, I know. Plenty of cameras can be set up to record only on movement but they’re not perfect. Nor do they work 24-hours a day. And that’s where Mobotix MxActivity Sensor comes in. 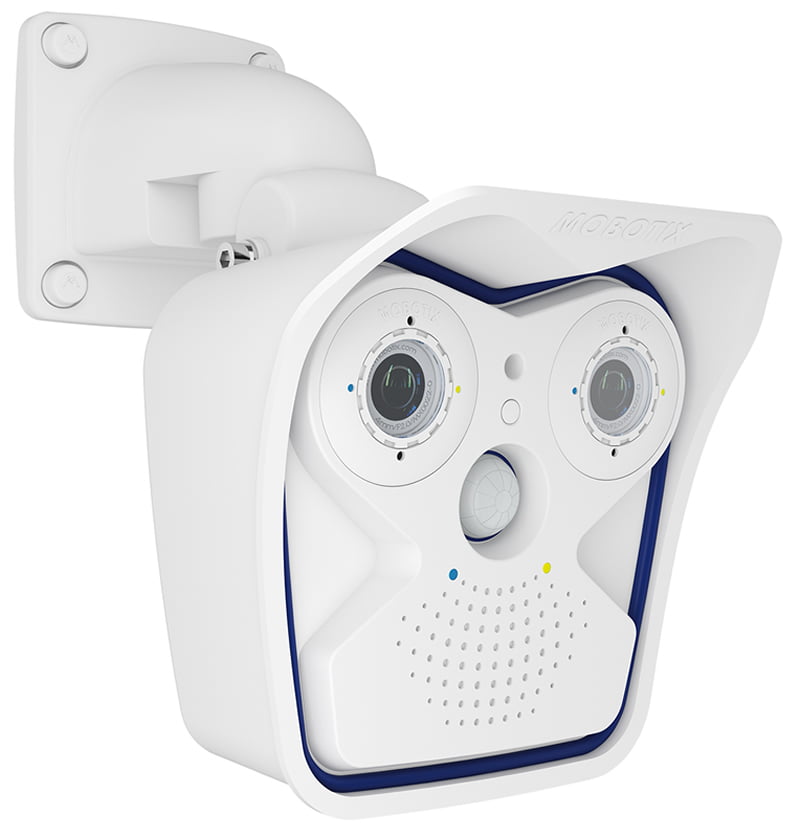 But before we go further, I should point out that it’s not possible to talk about MxActivity Sensor without talking about Mobotix’ M15-D dual head thermal and optical camera. It’s the combination of these 2 things that’s impressive.

The fixed thermal imaging sensor is 336 x 253 pixels and jogs along at a frame rate of 9Hz, which is industry standard. According to Mobotix, the M15-D uses a high quality thermal sensor that can see surface temperature differences from -40C to 550C between -30 and 60C ambient and the sensor temperature resolution is a discerning 50 millikelvin which is 0.05 degrees C – twice as sensitive as many other thermal cameras.

It would be a mistake to discount Mobotix’ optical camera. It’s new and improved with a superior sensor offering better performance in low light and back light. There’s also MxLEO, Lowlight Exposure Optimization software which comes with firmware release 4.1.9 free of charge. You download this to all 5MP Mobotix cameras and working with MxActivitySensor it delivers reliable video analysis of human/vehicle movements.

The strength of MxLEO is that it allows you to block out disruptive factors day or night so you can cancel out headlights or torchlights with much less noise than you usually see. Mentioning MxLEO also allows me to grumble about how hard it is to clearly define single products in these integrated digital times. MxActivitySensor is great in part thanks to key contributions from all this other stuff.

“If a camera is not viewed live and not recorded at full resolution and frame rate, then there’s no point installing 1080p x 60ips at all”

What happens when the M15-D is teamed up with MxActivitySensor software is that you get extremely reliable video analysis results of person/vehicle movements. The optical side is quality but the microbolometer is the thing that makes the difference because it’s so reliable. The thermal side of the camera simply always picks up heat and nothing more. It’s blind to optical noise from the environment – bushes, grass, street furniture, glare, shadow, whatever. The optical side is a huge bonus day and night but the reliability of MxActivity Sensor is not dependent on it.

Meanwhile, MxActivitySensor is a movement-controlled, software-based image analysis function for detecting movement of people and objects in a monitored area – you can choose full image or a section of an image – and you need to take care with this because sizing can impact on sensitivity depending on an event’s depth of field. Supporting this capability is that fact MxActivitySensor is easy to configure in ways that ensure minimal false alarms in applications with large amounts of external interference – moving rain on the camera lens, glare, trees or creeping shadows.

During setup you configure settings via browser, like image area and sensor sensitivity for image analysis events and then plug in the corresponding ‘acceptors’ of events. This might be recording or alarm notification via email or FTP, or playing of a recorded message at the camera, an acoustic or visual alarm signal.

Important to bear in mind here, MxActivity Sensor is designed to handle people crossing an image or moving toward or away from the camera, even when there is a large amount of movement in a scene. From the point of view of setup, you simply highlight the area in which you want to detect movement, or the direction in which you want movement to be detected and you locate the camera in the best way to pick up movement representing a threat.

MxActivitySensor is embedded into firmware versions 4.1.6 or higher, the minimum frame rate setting is 6ips and there’s no minimum resolution setting required. It’s possible to use both MxActivitySensor and Mobotix VMD simultaneously. Sensitivity is selected between 0-99 (highest). 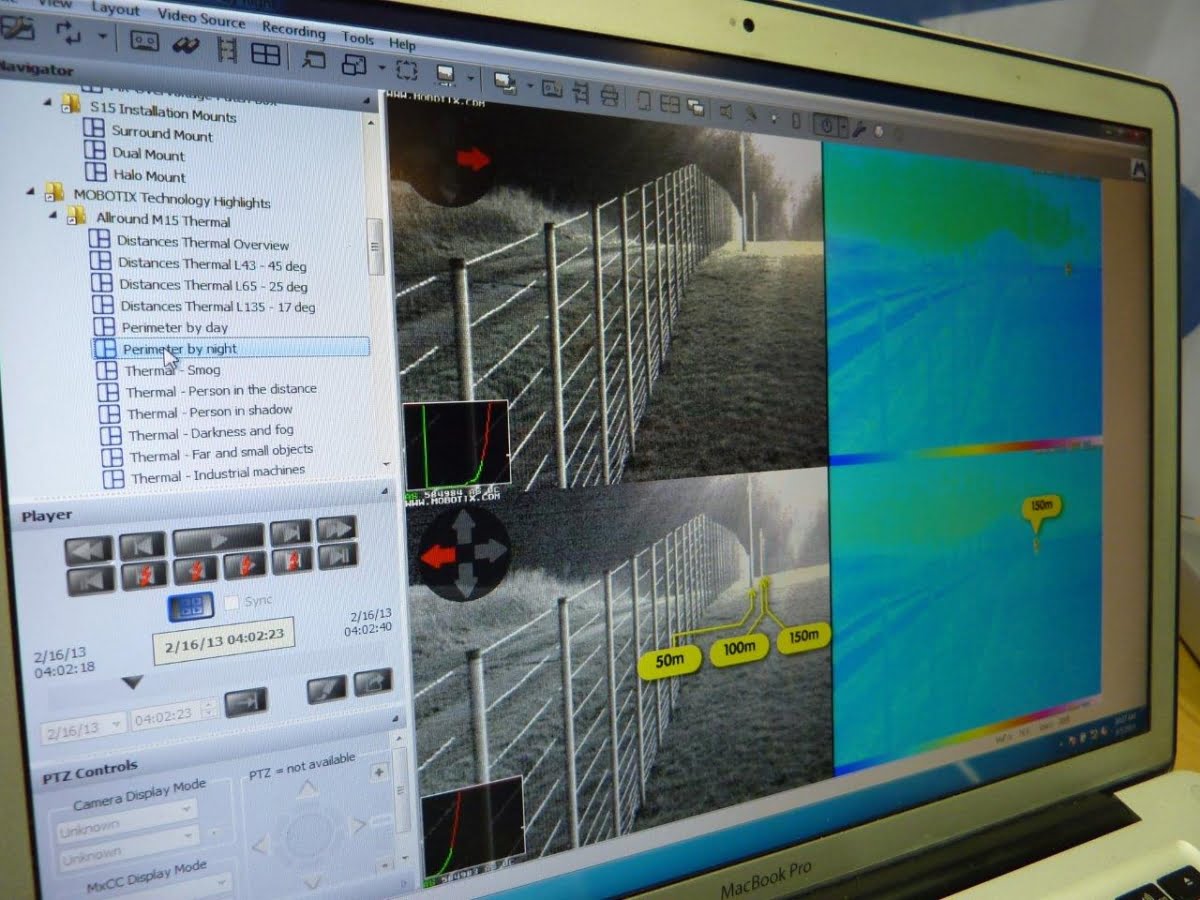 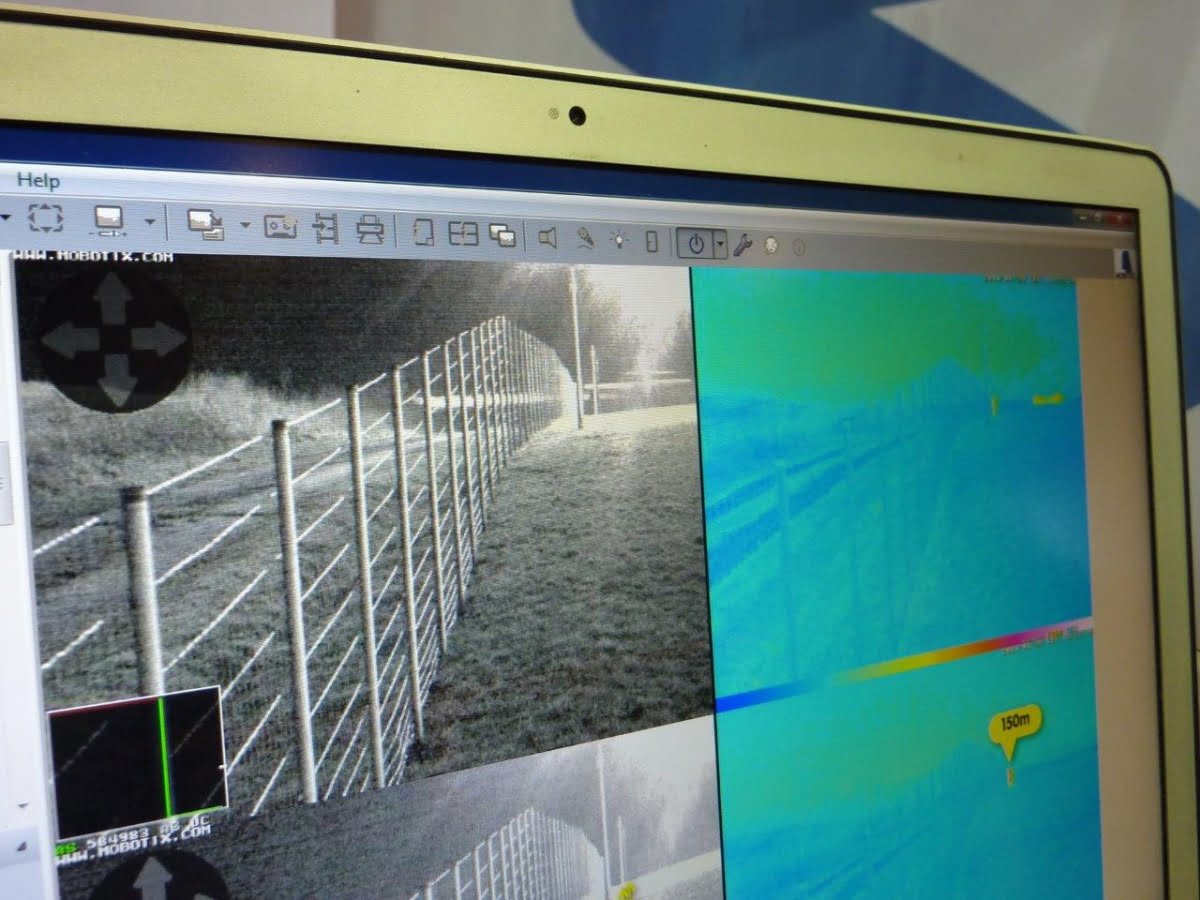 Importantly, MxActivitySensor works with mono and dual cameras. MxActivity Sensor has a diagram box that indicates on the viewer the level of movement being registered as visible deflection level along the temporal X axis. Depending on the selected sensitivity setting, the diagram box shows the lowest threshold value or the highest setting. You use a lower threshold for small movements and a higher threshold for more obvious movements across longer distances.

“The thing that makes our thermal camera so different from other thermal cameras is MxActivitySensor,” Graham Wheeler tells me. “Used with the M15-D is allows extreme reliability in complete darkness – you can see here that we can’t even see the person optically, but the thermal camera has detected them – look how small he is – he’s not visible in the monochrome image.”

We are looking at a long fenceline scene at this point and in the far distance – perhaps 170 metres – a human figure crosses at right angles just outside the fenceline of the property our camera is monitoring. Immediately they appear there’s a trigger alarm.

“Day or night we will achieve reliable detection at these sorts of big distances,” Wheeler tells me. “Dr Hinkel is adamant that thermal is the way to go – we believe all day/night cameras will have a thermal sensor as an intrusion trigger. And when you think of the capability, the extreme range and the performance of the camera, the cost is very low. We are the most affordable dual sensor camera on the market and offer an 80,000-hour (9-year) warranty.

It’s impossible to disagree with him that this performance, this level of reliability is a game changer in more ways than one. It’s not just about detecting intrusion reliably – it’s about what reliable intrusion detection means for bandwidth and storage in every network surveillance solution.

“Day or night we will achieve reliable detection at these sorts of big distances. We believe all day/night cameras will have a thermal sensor as an intrusion trigger”

We all agree that video cameras the world over, particularly after hours and on industrial, commercial and government sites without public traffic, are recording enormous quantities of nothing. They record these static scenes in real time just in case something happens. The combination of the M15-D and MxActivity Sensor is a disrupting technology I don’t think many people comprehend yet. 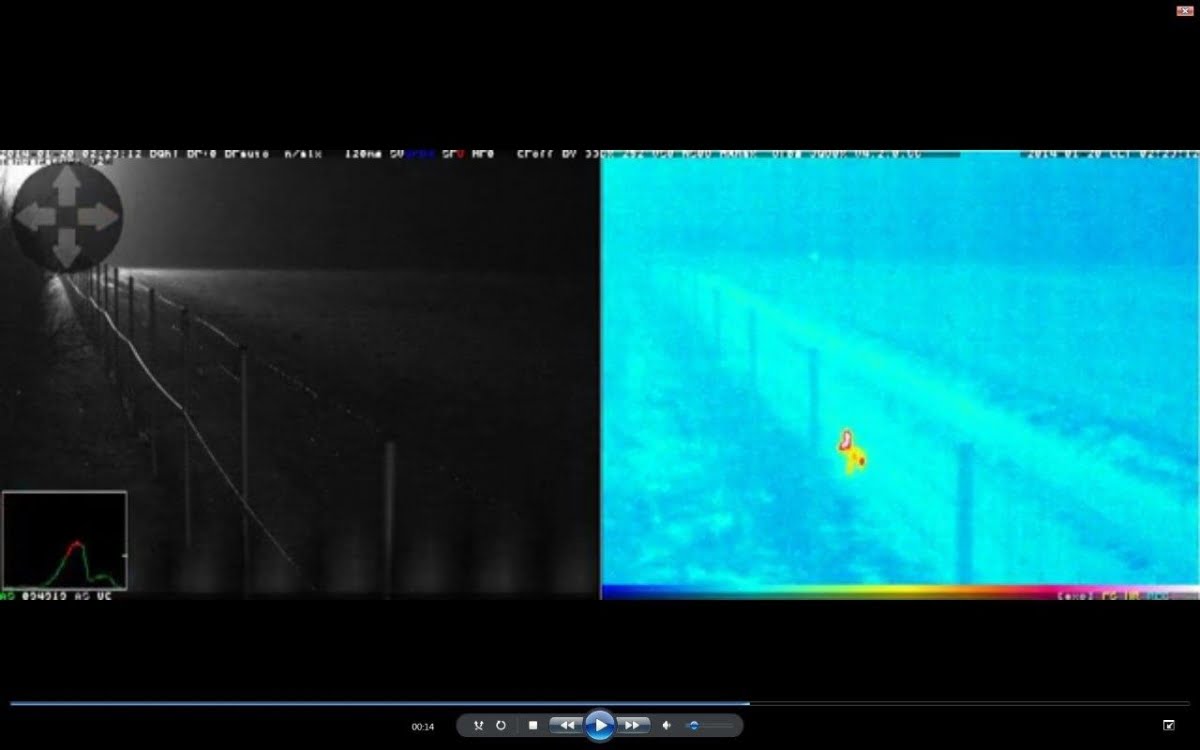 Most people would also generally agree that thermographic cameras offer as close as it is possible to get to 100 per cent accurate IVA 24 hours a day. Because you are no longer recording all the time, you can record instances of human or vehicle intrusion in real time and at the highest resolution possible.

The nature of this disruption is best demonstrated by another scene Wheeler shows me. It’s another perimeter, this one has a walking/cycling path on the public side of a fence line and a row of bushy screening trees on the sterile side. It’s a challenging scene. The camera’s job is to detect humans in the field of view while ignoring trees, which is no easy task for any IVA solution. 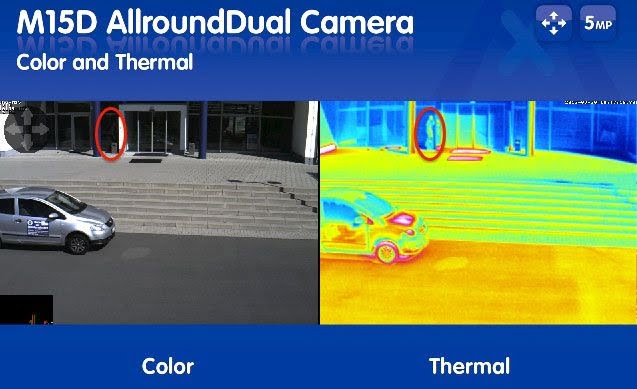 Now Wheeler points to the 24-hour comparison. A camera linked to a normal IVA has detected 8181 separate events and recorded 9341MB of data. Conversely, the MxActivity Sensor and M15-D have recorded 138 events and just 157MB of data.

To put this into context, MxActivitySensor required 1.7 per cent of the storage demand of a standard VMD solution in this application. And the standard VMD is still miles better than a camera recording 1280 x 1024 (1MP) at 15 frames per second over a 24-hour period. Even using H.264 compression, the storage demand is a touch over 54GB per 24-hours. Now multiply 54GB by the number of cameras you have – 50, 100, 500 and multiply it by 30 days. This expensive equation is one of the reasons I keep seeing 1080p and 720p cameras recording in D1 at 12 frames per second.  ♦