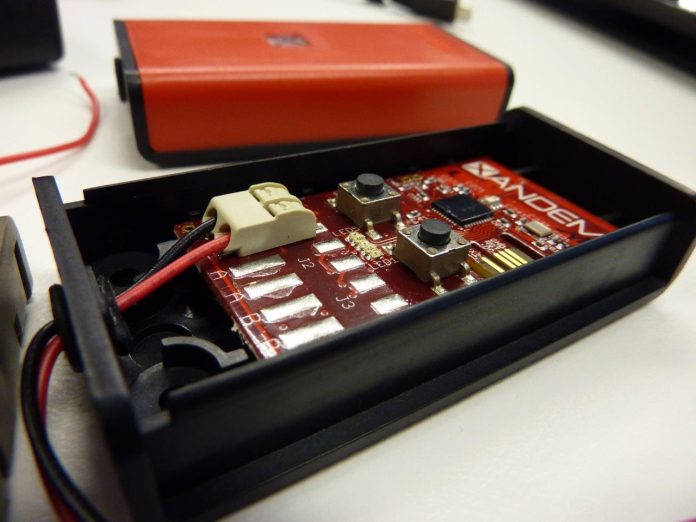 Hills has released the Xandem Tomographic Motion Detection system, capable of monitoring spaces from 50 to 500 square metres without line of sight. And because Xandem uses microwave detection, it can be discretely installed behind walls.

I GOT a look at the Xandem TMD solution at the Hills’ office in Pitt St, Sydney. Hills’ Fei Lee and Tony Le had set up a group of 6 Xandem TMD (Tomographic Motion Detection) nodes around the company’s busy Crestron Showroom before I arrived. When they ask me to find the sensors, my eyes fly to the cornices, upper walls and display racks but I see nothing.

Hidden behind the displays are the Xandem nodes – grey plastic boxes with dimensions of 3.8cm x 7.6cm x 1.3cm managed by an identically-sized red control node. They are smaller than a typical PIR and apart from a frontal LED, there’s no indication of their purpose.

Xandem’s TMD kits include sensing nodes, which are the devices mounted around the perimeter of the area being protected, the processing unit, which is the same size as the nodes, and mounting hardware. The Xandem processing unit has integrated adjustment for configurable global parameters like sensitivity. 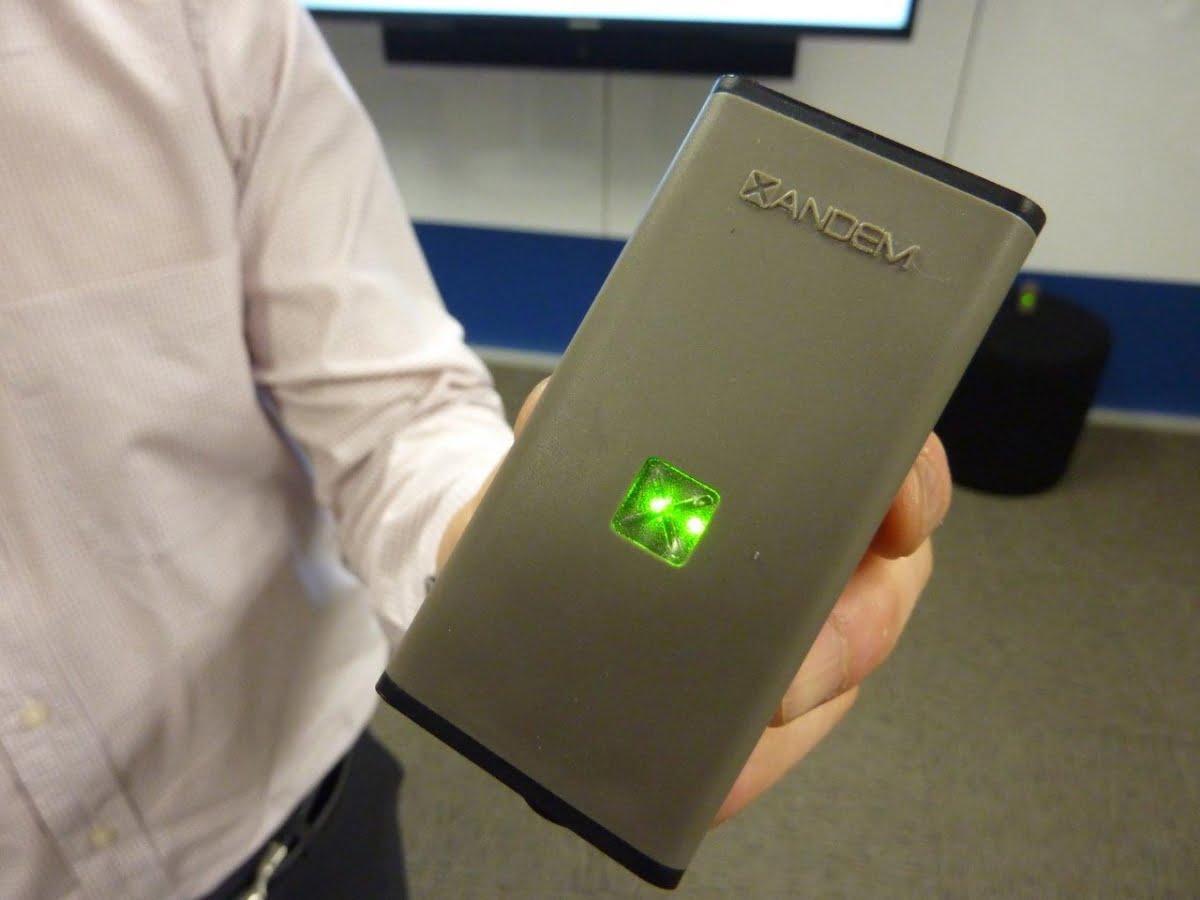 The devices are not waterproof so you techs will need to keep your Xandem installs indoors and away from moisture. This said, they look to me like they would be very easy to harden for challenging internal environments. You could conformal coat the boards, seal the housings; or better still, button them up in a moisture-proof housing pre-install.

According to Lee, Xandem is not a new solution – it’s been available in the U.S. for many years. And it’s not new to Australia – Xandem already has customers locally – but from now on Hills will carry the product and handle support.

“Xandem is a company in Salt Lake City in Utah and the technology was designed by engineers,” Lee tells me. “It’s a technology unlike any other we have seen. It’s actually a simple concept. You have nodes around a defined space in groups of 6, 10 and 15 nodes. Each system of nodes has a processing unit (nodes are grey the PU is red) and the nodes constantly communicate with the PU at microwave frequencies.

“This communications mesh which links all the nodes to each other and to the PU actually forms the sensor,” Lee explains. “It’s a very complete coverage – if one node does not see an intruder, another node will see them so detection covers the entire protected area, not just the perimeter.”

The detection area is 50 metres square with a 6-node Xandem solution and 500 metres square for a 15-node solution. Supply is 12V DC for nodes and processing units, and current draw is a measly 34-50mA. There are 16 selectable Xandem channels between 2.403GHz and 2.480HGz and installers can select from if they want to move away from factory default.

“Masking is a problem with PIRs – but Xandem is meant to be masked, it’s meant to be hidden. Installers can locate the nodes behind walls – they can see through glass, timber, plasterboard”

According to Lee, the advantage of Xandem over a PIR is that it is not subject to false alarms caused by temperature variations and is not masked by dust and dirt that will inevitably cause false alarms. PIRs have a limited range that gets smaller in hot weather and they are not discrete.

“Masking is a problem with PIRs – but Xandem is meant to be masked, it’s meant to be hidden,” says Lee. “Installers can locate the nodes behind walls – they can see through glass, timber, plasterboard. Perfect applications for Xandem are shop floors or a warehouse or art gallery where stock is moving, displays are changing in ways that would mask a PIR or a dual technology sensor. With Xandem you don’t have to worry about this – you install a Xandem mesh and you are done. It saves money and improves security.” 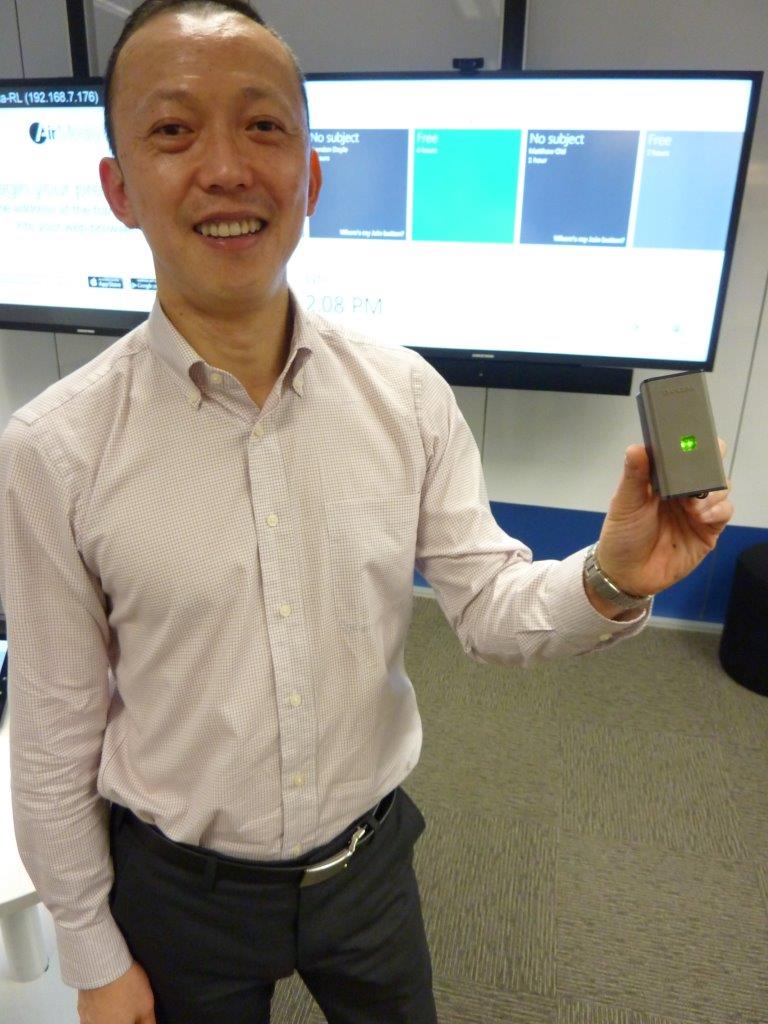 Ok – you’re an installer and you want a Xandem mesh in the warehouse of an existing client in which you already have an existing 16-zone alarm panel. What do you do? The first thing is plan your install – you test the nodes pre-install to make sure there’s adequate signal – this is easy to do with a couple of double-A batteries on nodes and PU. Physcially installing Xandem involves a power supply connected in a daisy chain to a group of TMD nodes. Because communication between nodes and PU is by wireless, installation is simplified.

The Xandem Processing Unit is powered separately and doesn’t need to be connected to the TMD group. Meanwhile, the connection between the processing unit and an alarm panel is a normally-closed relay. When an alarm is triggered by the Xandem mesh sensor it simply opens a relay on the processing unit and this triggers an alarm condition on a single zone of the alarm panel. According to Lee, you can set a bigger Xandem solution up as multi-zone system but you need to install 3 PUs to drive 3 possible zones.

You need to keep the Xandem nodes 0.5 to 1 m above the ground on a stable mounting point around the perimeter of the protected area. When powered up, each node links to each other node and to the controller. Fundamentally, nodes are not a sensor, the RF connection lines between all the nodes and the PU form a ‘mesh-sensor’. It’s attenuation of these signals that is interpreted as intrusion by the PU. The more nodes, the more lines in an area, the higher the level of security because there are fewer voids in the sensing pattern.

“The most important device is the red-coloured control unit and it needs to be near the grey-coloured nodes as it is in constant communication with them,” explains Lee. “Once the PU is installed, you link it to the alarm panel on a wire-pair direct to a relay input – it’s very simple.”

Because the mesh-sensor is microwave, sensitivity can be an issue if your protected area’s perimeter is glass or plasterboard or timber. The idea is to walk-test the verges of the protected area during installation. Taking plenty of time to walk the area is the secret avoiding false alarms while retaining optimum sensitivity. Double brick, concrete, metal or masonry will form a solid barrier to the signals and will not need to be walk-tested.

“In smaller applications you may need to turn the sensitivity down, while in a bigger room with fewer nodes per square metre you would turn the sensitivity up.” Lee says. “Importantly, you can tune the mesh to ignore small animals, insects and other environmental disturbances. But because it’s microwave Xandem TMD will detect things like bushes, leaves and rain, so it’s not suitable for outdoor applications.”

Setting the mesh away from default is handled by one of 2 buttons under the PU housing. You pop the bonnet and click Button 1 the number of times required to reach a function – motion threshold, channel shift, factory reset, etc. This requires counting in your head but is not complicated. Having reached the function you want to set, you click button 2 to make a setting selection. Verification of selected settings is by LED – all very simple.

A Xandem mesh kit comes pre-programmed with a selected channel so you can’t interchange nodes from one Xandem kit to another after purchase. But you can change the wireless channel so if 2 Xandem meshes are adjacent you can shift the frequency to avoid interference. The process is the same as for sensitivity. Click Button 1 to get to channel selection, click Button 2 to select a channel. 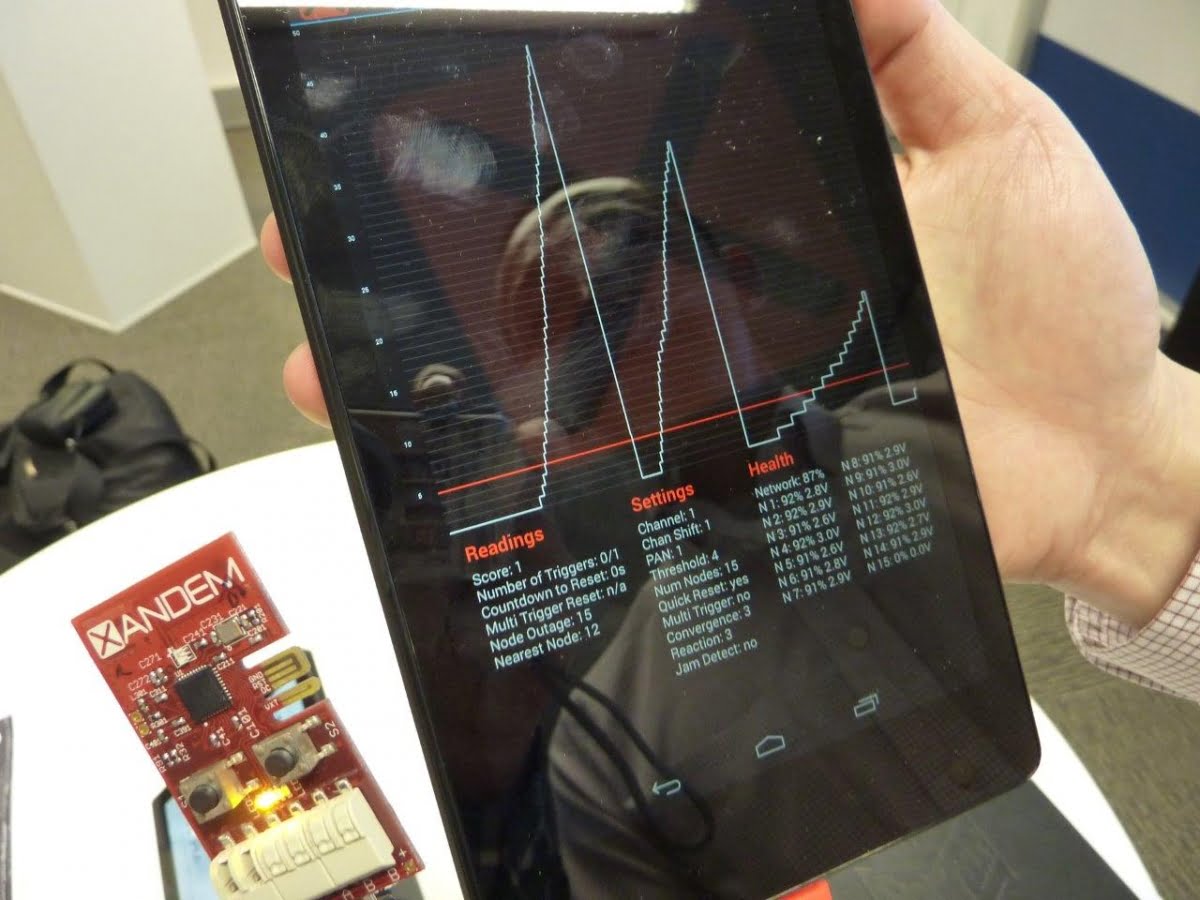 Trouble shooting is easy, too. Because Xandem is a mesh of nodes in constant communication, they all know if a node has disappeared. The mesh-sensor will continue to function but node trouble will be reported.

“There’s a tablet app for troubleshooting that tells you which node is out, as well as giving you information on readings, settings and health,” Lee explains. “The app will also tell you that the network is 100 per cent and during commissioning when you walk test the protected area you can see the quality of the detection signal.”

According to Lee, prices are sharp given Xandem offers complete coverage in changing environments using sensors that are absolutely discrete. Cost is around $A800 to the installer for a Xandem kit able to cover 50 square metres (5m x 10m area). But Xandem TMD is silly cost-effective in larger applications. A Xandem mesh-sensor capable of covering 500 square metres (10m x 50m area or 25m x 25m area, etc) is around $A1600 – twice the price for 10x the coverage.

This is a good deal. There’s no creeping around or under Xandem anywhere in the protected area. If you move in mesh-sensor, you will be detected. And the system is not effected by a changing environment, which in many applications is real godsend. And because it drives a relay, Xandem is not just a security solution.

In the future the technology will be even more powerful. Because Xandem TMD technology is a mesh, it can triangulate location and direction of movement in real time. This means that using advanced software analysis currently under development, it will track intruders in real time across a floor plan on a monitor – a bit like the Marauder’s Map in Harry Potter – though minus the disappearing footprints.

As an observer of industry trends, it’s always nice to see new sensor technology – it’s a very rare thing in an alarm industry that’s too often motivated by lowest price.

“We think Xandem fills a gap in the market and we have approached a number of potential customers who are very interested,” says Lee. “Xandem meets a real need. It’s a very powerful tool with many applications and we are working closely with Xandem on ways this solution can be improved even further.”

* Coverage from 50 square metres to 500 square metres
* Senses through obstructions in the protected area
* Installs behind walls – impossible to
* Complete coverage: TMD senses motion over areas, not perimeters
* TMD is not triggered by changes in temperature, light, small animals, smoke, insects or dust
* TMD connects with normally-closed contacts on any alarm panel.