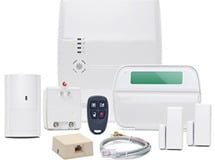 WHEN we first reviewed Alexor about 18 months ago what impressed about DSC’s high-end wireless solution was the way it gave real benefits to end users and installers. With 32 wireless zones and super fast zone programming, there’s not much doubt this panel sets the standard in wireless alarm panels.
According to Q Alarms’ Rob Lucas, Alexor is market leader in the area it targets.
“The primary market that we are focusing on with Alexor is the residential market,” says Lucas. “With 32 zones and 16 keyfobs (not taking up any zones), we believe that this panel is the bench mark for wireless in this market. It’s highly unlikely that the configuration offered would not be more than adequate for even the largest residential application.”
While domestic applications are ideal for Alexor, Lucas says the system is also capable of commercial applications such as small business, retail and factory applications.
“Our customers are installing this panel in many retail and small factories where the 32 zones and 17 user codes are ample for the size of both the building and number of employees,” he explains.
Programming speed is the really big deal with Alexor because it enhances speed of installation. You’d expect installers to appreciate just how fast it is to designate zones and get a working Alexor solution into client premises and Lucas says this capability has not gone unnoticed.
“The proof is the number of installers who come back to buy more Alexors after realising that the installation is so quick and simple,” Lucas explains.
“Because install is fast they are free to do other income generating activities in their business, rather than being tied up for most of the day on an installation.
“For those who may be new to DSC systems, Alexor’s easy wireless enrolment combined with Template Programming offers the installer a super-quick setup and because DSC’s 2-Way Wireless Security Suite is completely wireless, installers have fewer holes to drill and fewer wires to pull.
“The suite anchored by Alexor has a full complement of compatible two-way and one-way wireless accessories, detectors and keypads. Designed for optimal functions in many configurations, the wireless product suite takes far less time to install than traditional wired or hybrid systems.”
The proof of success comes in sales and there’s a buzz building around Alexor. According to Lucas, the market has been impressed with its overall build quality, capabilities, and ease of installation.
“Even our die-hard DSC hardwired installers prefer to use the Alexor wireless wherever possible. Many installers are tired of climbing through ceilings and pulling cables. Work smart, not hard is my motto when explaining the advantages of this product.

“Wireless certainly has become a big part of our lives – as I often say – we don’t even get up from our couches to change the TV channel any more. Programming follows traditional DSC methods so, although some sections have been added or changed, an installer with DSC experience will feel right at home.”
Some features we especially like about Alexor include its ability to recognise and enrol legacy DSC wireless sensors, template programming and an onboard power management program. Such smart functionality is always going to be popular with techs.
“The fact all DSC’s wireless peripherals are able to be used with the two-way Alexor panel certainly makes it easy for installers to upgrade existing DSC wireless sites to the Alexor,” says Lucas.
“With 4 full message wireless keypads and 4 wireless sirens, along with a 16 interactive LDC key fobs, the system allows an easy sell to users who just want simplicity with their alarm system. Upgrades are easy since detectors don’t require changing.”
Since we last reviewed Alexor an integrated Voice Dialler has been included which gives customers the option of self monitoring.
“When Alexor with Voice Dialler goes into alarm or needs to communicate another significant event, customers will be notified directly from the panel to their designated phone line,” Lucas explains. “The dialler supports 16 languages, has a voice library of 50 words and includes 16 recordable messages and one site identity.
“This Voice Dialler also includes six voice dial numbers for multiple path communication of events, allows for programmable call directions for voice calls and remote access via the phone line to arm/disarm/bypass the security system.
“Alexor will also allow the user to switch from listening to a voice dial call and take remote control of their panel. There are also 29 programmable zone types, giving customers ample choice as to how they want their alarm system to function.”
A great strength of the Alexor panel is the onboard suite of communications options and Voice Dialler backs up what was already serious capability in this area.
“DSC has designed a number of back-up communicators specifically for Alexor,” says Lucas. “The TL265GS Internet and GSM/GPRS Dual-Path Alarm Communicator communicate via the IP or GSM/GPRS channels and the GS2065 GSM/GPRS Wireless Alarm Communicator through the GSM/GPRS channel.
“Meanwhile, the new TL265 Intranet/Internet Communicator communicates by way of the IP channel. All provide additional back-up (to the traditional phone line communication) alarm communication methods.”
Another neat new feature of Alexor is that when it is used with either the GS2065 GSM/GPRS Communicator or the TL265GS GSM/GPRS and IP Dual-Path Communicator, the panel has the ability to notify of zone alarms, troubles, openings and closings to mobile phones via SMS.
“Installers are gradually warming to the idea of the Internet as a communicator, however preferences still lie for the tradition dialler and GSM/GPRS options at this stage,” Lucas explains.
Another feature I liked about Alexor when I first met the panel was that the modular design mirrors the layout of a standard alarm panel with motherboard and dialler/comms hidden safely out of sight. According to Lucas, this familiar layout has made installers more comfortable with the system.
“Certainly yes but most important, the keypad sets Alexor apart from “all-in-one” systems, as well as from other manufacturer’s wireless systems,” he says.
“The control panel can now be placed in a safe, out-of-the-way location, while the keypad gives the end user, as well as the installer, complete control over the system, with the same functionality and speed as a hardwired keypad. It’s also possible to disable the control panel’s onboard siren and utilize the wireless sirens to further protect the panel’s whereabouts.
What impresses about Alexor on first inspection is the appealing aesthetic of the keypad with its large LCD display and overall appearance. Lucas agrees the wall presence of Alexor has been a hit with end users?
“Women love it – DSC spent two years researching market opinion on the design of its keypad, so we worked hard to get this right,” he says.
“As the keypad is the face of the system, it was important to make it look attractive in appearance and functionality. Being a wire free keypad (up to four) it no longer needs to be mounted on the wall.
“With its desk mount it can be placed on a bedside table or anywhere in the home or office where it’s convenient. Wherever it is, you want the keypad to be an enhancement and that’s what we have achieved with Alexor.”
What about cost? Lucas says Alexor is more expensive to purchase from the installer’s point of view compared to a hardwired system – however the typical installation time is around an hour with power and phone line readily available.
“This includes installing an external two way wireless siren,” he explains. “Compared to approximately 5-6 hours for similarly configured hard-wired installation, the cost of the Alexor would outweigh the cost of labour.
“More importantly, the time previously required to be on site installing the hard-wired panel can be devoted to other activities in the business. The risk of damage to the home owner’s premises is also reduced, as well as the safety of installer who no longer has to pull wires through the roof.”
What’s next for DSC’s wireless alarm products suite?
“Just watch this space,” teases Lucas. “DSC has a number of great new products being launched this year – all focused on the wireless range and enhancements to the Alexor.”
Fact file:
Features of the DSC Alexor alarm panel
* 32 wireless zones, 16 wireless keys (without using a zone slot)
* Wireless quick enrol
* Template programming
* 16 user codes, 1 master code and 1 maintenance code
* Account code error checking (patent pending)
* Alternate communications via GSM/GPRS and IP
* Voice dialler
* Onboard siren at 85dB
* 2 Input/Output terminals
* 200mA Aux Output
* 500 event buffer
* Wall and case tamper
* 24-hour battery backup.

“Just watch this space. DSC has a number of great new products being launched this year – all focused on the wireless range and enhancements to the Alexor”