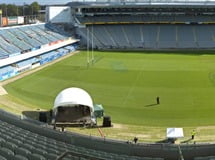 The next generation surveillance system acts as a kind of fourth-referee for the crowd, and effectively does away with the need for multiple CCTV cameras.Signs of trouble can be picked out and individual spectators zeroed in on, gathering detailed and full resolution video footage for evidence.
A rugby game between the Blues and the Crusaders was used by distributor C.R. Kennedy to show off the technology to interested parties from around New Zealand. Eden Park spokesperson Tracy Morgan said the ground was considering the technology to “enhance” current security systems.
“We are simply a review site…they are using us so that they can show it off to everyone else,” Morgan said. “They are using the park as a trial, it’s not necessarily something that we see a need for at the moment.”
Eden Park already had 270 CCTV cameras, which provided full coverage of all stands and other areas such as carparks. C.R. Kennedy New Zealand, the Mt Wellington-based company displaying the new technology, declined to comment last night. It offers Australasian distribution of the technology with its sister company, C.R. Kennedy & Company Australia.
The Panomera camera, made by German manufacturer Dallmeier, captures and records the whole crowd constantly in up to 51 megapixels. Importantly, when the operator zooms in on a trouble spot, the wider picture can be viewed and permanently recorded simultaneously. For applications like stadiums and airports Panomera is a powerful monitoring and investigative tool.
Linkedin
Facebook
Twitter
Email
Copy URL
Print
Previous article
Bosch Releases VMS 4.0 Video Management System
Next article
Optex Redwall IP Detectors